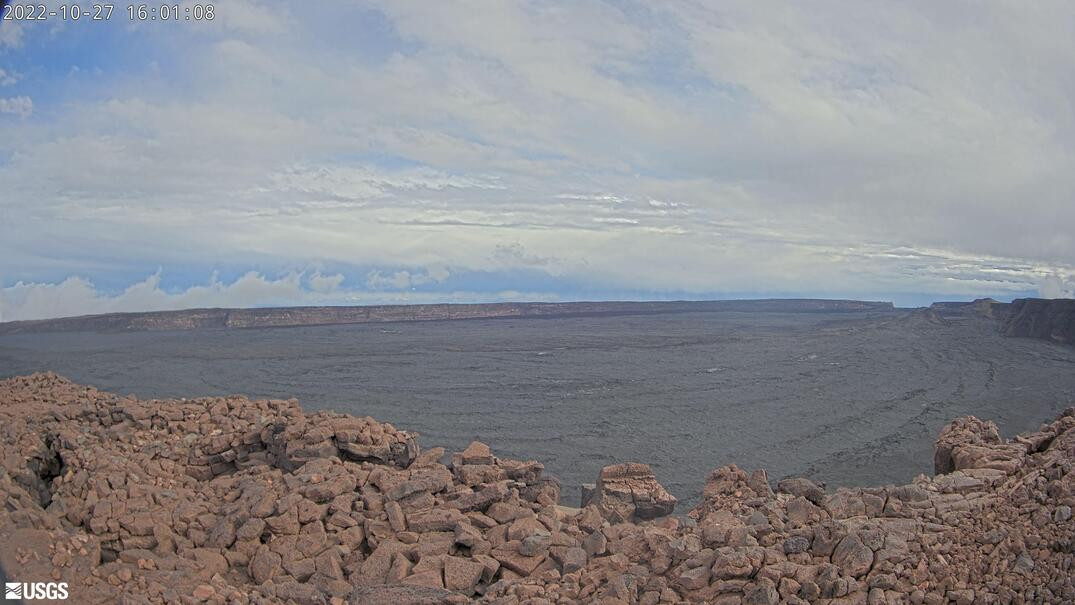 USGS webcam image from a temporary research camera positioned on the north rim of Mokuʻāweoweo, the summit caldera of Mauna Loa volcano.

(BIVN) – Mauna Loa is not erupting, and although officials say there are no signs of an imminent eruption at this time, scientists note that the giant Hawaiʻi island volcano continues to be in a state of heightened unrest.

The USGS Hawaiian Volcano Observatory says the heightened unrest began in mid-September, with increased earthquake rates below the summit-area (from 10–20 per day to 40–50 per day), and an increased rate of inflation. Scientists believe this unrest “is likely caused by renewed input of magma into Mauna Loa’s summit reservoir system.” The earthquake rates have been decreasing in recent days.

On Thursday, the Hawaiʻi Emergency Management Agency issued its first news release on the Mauna Loa unrest. The agency stated:

Mauna Loa’s continuing seismic activity is causing concern for some residents on Hawai‘i island, but there are no signs an eruption is imminent. Hawai‘i County emergency managers and experts on volcano geology will hold the latest in a series of briefings to update the public on the situation this evening in Pāhala.

Both the Hawaii County Civil Defense Agency (HCDA) and the Hawai‘i Emergency Management Agency (HI-EMA) have increased monitoring of the volcano. The United States Geologic Survey’s Hawaiian Volcano Observatory (HVO) has been issuing daily reports on Mauna Loa’s activity since September but has indicated its scientists have seen no indications of an immediate threat.

“Mauna Loa continues to be in a state of heightened unrest,” said Ken Hon, chief scientist at HVO, in the observatory’s most recent report on the active volcano. However, Hon noted, “the current increase in activity does not suggest that a progression to an eruption is certain.”

HCDA has been posting daily snapshots via social media of Mauna Loa’s activity, based on data from HVO, including the current alert level, status, and a recap of activity over the previous 24 hours.

“Under current conditions an eruption from Mauna Loa is not imminent,” said Talmadge Magno, Hawai‘i County civil defense administrator. “We’re reminding people to take this opportunity to register for county emergency alert messages and prepare or review their plans to be ready for any disaster.”

Magno and Hon met with Hawai‘i island residents on Saturday at the Ocean View community center to discuss the latest readings and preparedness measures. They noted that because Mauna Loa covers 51% of the island’s area, it’s hard to predict which areas might be affected if an eruption occurs. If lava were to break out of the summit area, Magno said, the County would provide specific information about any necessary safety or evacuation measures, including details about routes and shelters.

Another informational session with the local officials is scheduled for 5 p.m.-7 p.m. tonight at Robert N. Herkes Gymnasium, at 96-1219 Kamani St. in Pāhala.

“HI-EMA continues to support our partners on Hawai‘i island with outreach and planning assistance as Mauna Loa’s activity evolves,” said agency Administrator Luke Meyers. “We encourage residents who are concerned about the seismic activity beneath the mountain to explore the ways they can improve their preparedness, including updating their emergency plans, reviewing their evacuation routes near where they live, work, and play, and checking the batteries in their emergency supplies.”