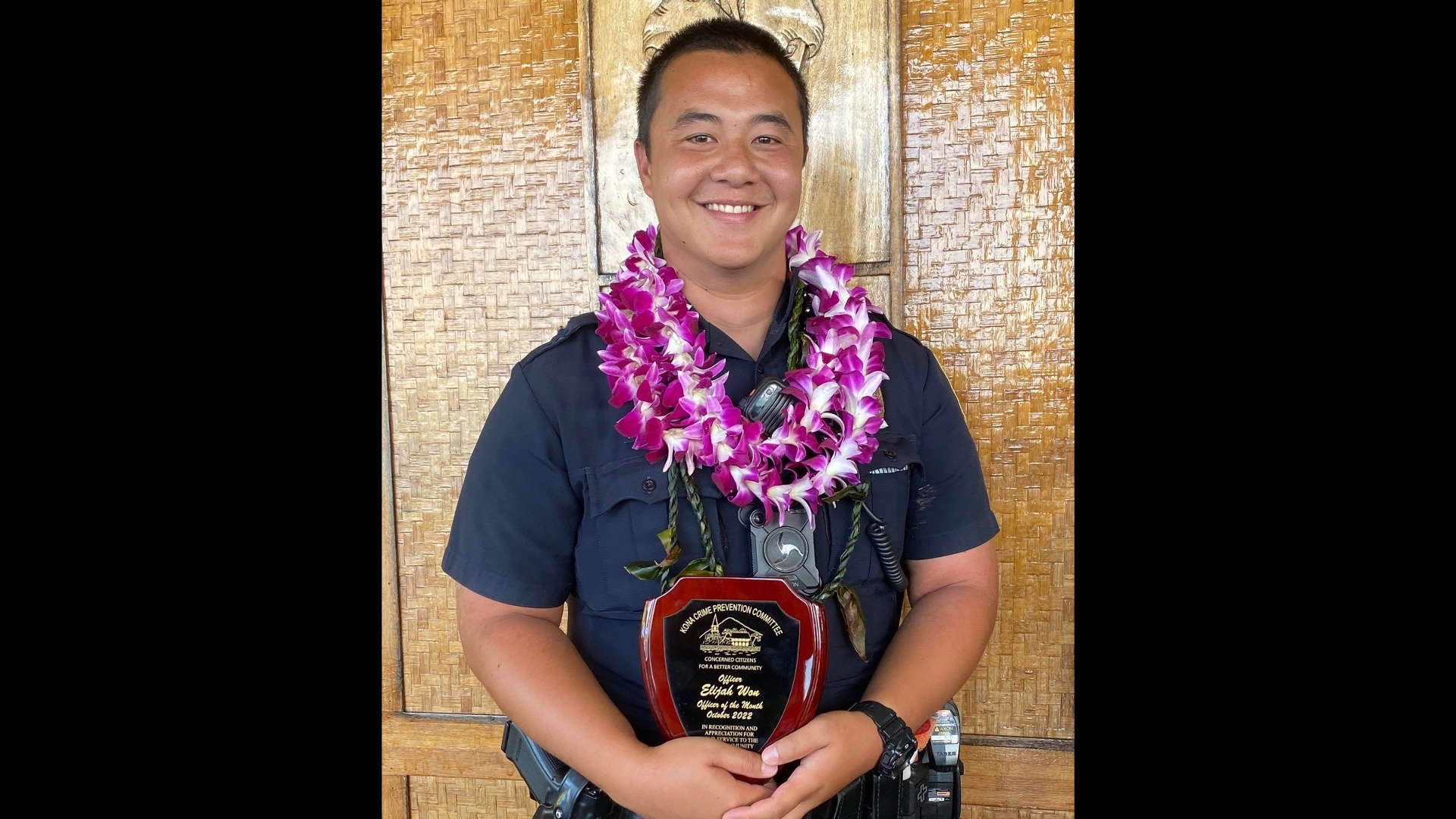 KONA, Hawaiʻi - Officer Elijah Won apprehended a federal fugitive from Mexico, who was suspected of stealing of vehicles and illegal narcotic distribution.

(BIVN) – A Kona Patrol Officer was recently recognized for his efforts in tracking down a wanted federal fugitive.

Hawaiʻi Island Police Officer Elijah Won was named Officer of the Month for October 2022 by the Kona Crime Prevention Committee. An awards ceremony at Huggo’s on the Rocks in Kona was held on Wednesday, October 12, 2022.

The story, as told by the Hawaiʻi Police Department:

At 3:44 a.m. on February 7, 2022, while patrolling a portion of Walua Road in Keauhou known for drug activity, Officer Won and his beat partner Officer Curry McFadden came across a Honda sedan parked on the side of the road with an unidentified man asleep behind the wheel. Officers could see what appeared to be a meth pipe in the vehicle’s center console.

As they were visually inspecting the exterior of the car, the man behind the wheel woke up and exchanged words with the officers. He refused to give Officer Won his name or provide identification and instead started his car. Ignoring the officers’ commands and their safety, the man fled the scene, sideswiping Officer Won’s police subsidized vehicle in the process.

Officer Won was subsequently able to determine that the driver of the vehicle was Martin Medina, a federal fugitive from Mexico. Medina was suspected to be involved in criminal activity, including the stealing of vehicles and illegal narcotic distribution. He was also wanted on a federal deportation warrant by Homeland Security Investigations for illegally re-entering the country after being deported.

After the February encounter, Officer Won diligently gathered intelligence on Medina’s whereabouts and other possible vehicles he might be operating. However, every time they attempted to apprehend Medina he evaded arrest by driving into traffic at a high rate of speed. Officers were unable to pursue him because Medina was creating a hazardous situation putting the public’s safety at risk.

On April 20, 2022, while enroute to an unrelated call, Officer Won spotted the Honda sedan from the February incident at a gas station in Captain Cook. Upon closer inspection, Officer Won determined the Honda was indeed the same vehicle and saw Medina pumping gas into a gas can. When Officer Won told Medina he had a warrant for his arrest, Medina disavowed that he was indeed Medina and fled on foot into a busy roadway. Officer Won was able to gain control of Medina, removing him from the middle of the roadway with minimal use of force. Medina is now in the custody of Homeland Security Investigations awaiting deportation.

This is the fifth time in his three-year career that Officer Won has received this award, police say.