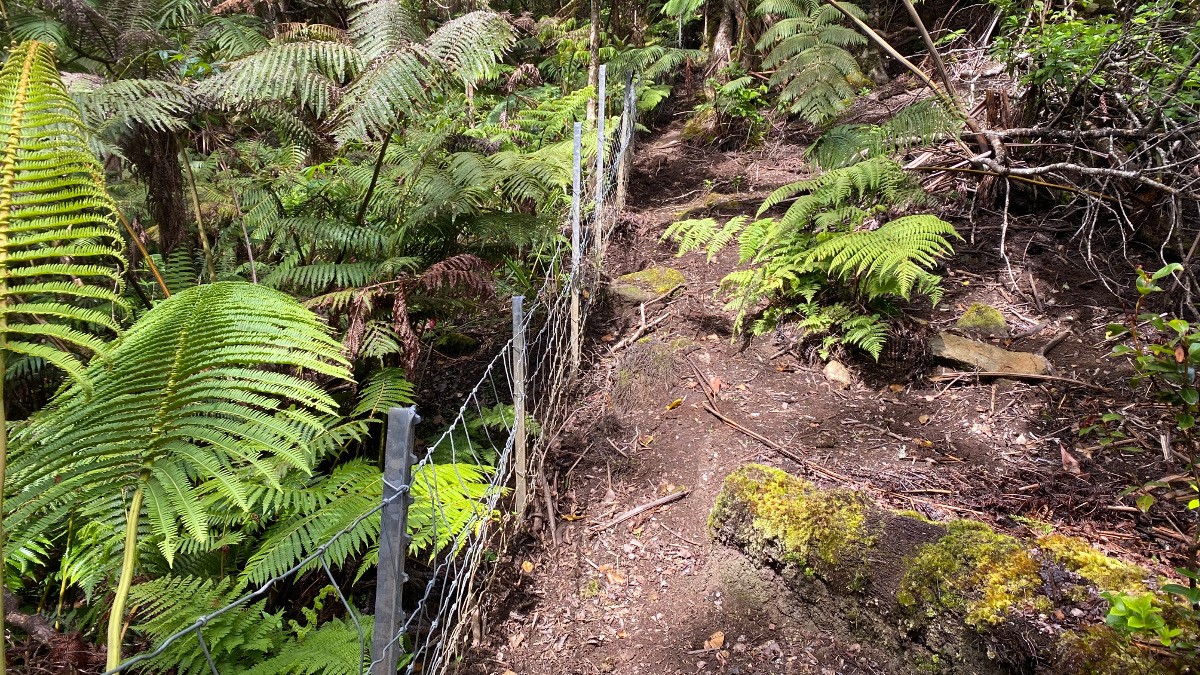 Kohala Center: "What difference can a fence make? Fenced in 2004, Kilohana stream unit (left) neighboring ‘Eke has thrived under pig-free conditions as indicated by the abundance of native plants covering the ground like ʻamaʻu, maile, and hāpuʻu." (Photo credit: Mahina Patterson)

KOHALA MOUNTAIN - The ‘Eke project is a priority for the Hawaiʻi DLNR, The Kohala Center, and the Kohala Watershed Partnership. 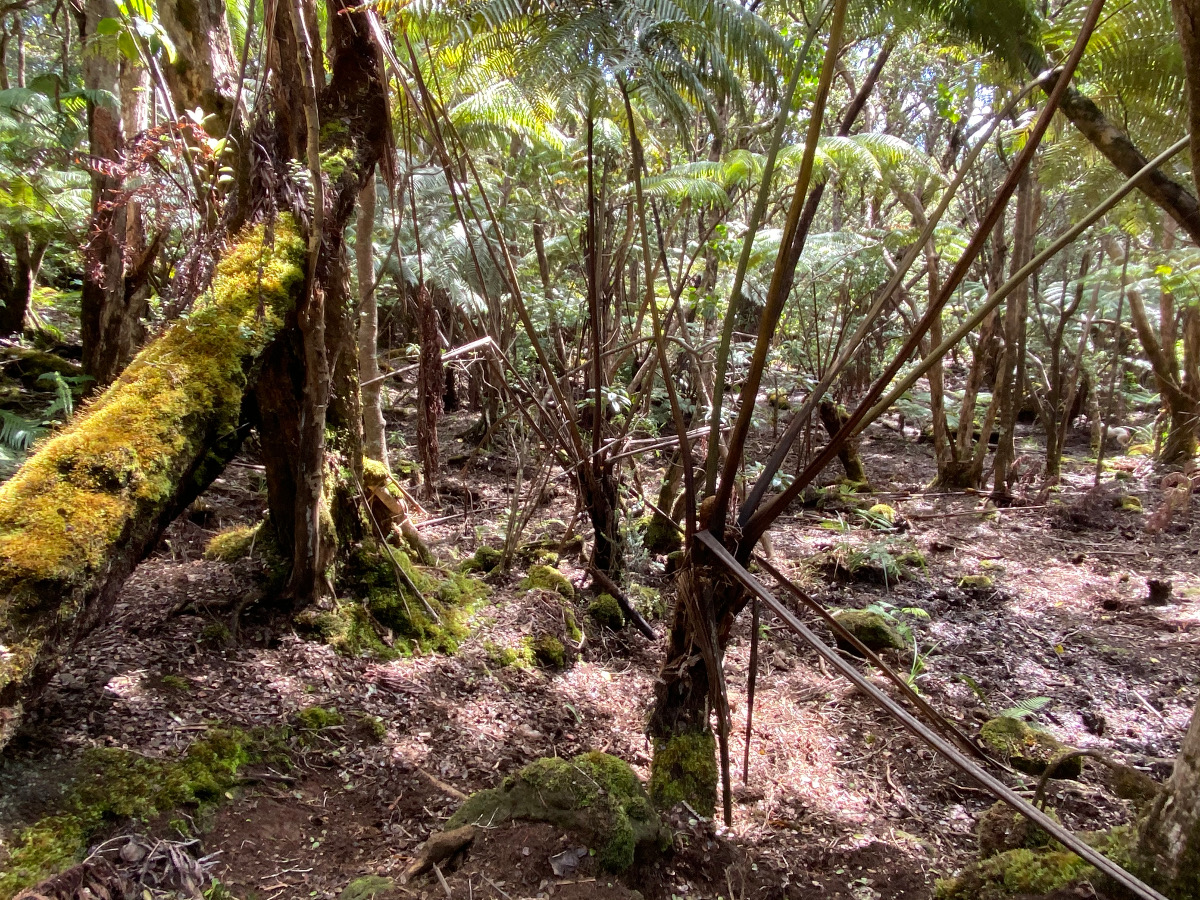 From the Kohala Center:

The Hawaiʻi Department of Land and Natural Resources (DLNR), in partnership with The Kohala Center (TKC), recently received $234,000 in funding from the Hawaiʻi State Department of Health (DOH) to protect and improve the quality of water resources in leeward Kohala and reduce nonpoint source pollution by mitigating soil erosion and increasing groundcover.

The security of Kohala’s water supply depends on the health of the region’s upland watershed. A 2019 study conducted by the Economic Research Organization at the University of Hawai‘i identified Kohala as one of the highest priority areas for cost-effective watershed management due to large recharge benefits. An estimated 378.7 billion gallons of water yield and 193.1 billion gallons of groundwater recharge could be saved from loss over 50 years with proactive stewardship of Kohala Mountain’s vulnerable native forests. The ‘Eke project is a priority for DLNR, TKC, and the Kohala Watershed Partnership to protect an intact native forest rich in unique ecological communities, culturally significant natural features, and streams that are important sources of fresh water.

‘Eke is home to the headwaters of Keawewai and Luahine streams. According to the Kohala Mountain Watershed Management Plan, most water quality problems in the upper watershed are related to soil erosion that can be exacerbated by animal and human disturbances. These streams are currently threatened by sedimentation primarily caused by non-native feral pigs.

“It has been estimated that ‘Eke could degrade to non-native forest in less than 50 years if concerted efforts aren’t made to protect the native cloud forest,” said Jake Merkel, Kohala watershed field supervisor at The Kohala Center. “Non-native animals and plants are the primary threats to the watersheds of Kohala Mountain, so we plan to focus on protecting ‘Eke by removing feral pigs and Himalayan ginger and doing what we can to keep them out, allowing the forest to heal and regenerate.”

‘Eke is a 614-acre, largely intact native forest that has been prioritized for proactive management in the Kohala Mountain Watershed Management Plan. The forest is encompassed by the Kawaihae and Honokoa watersheds, a swath of 31,013 acres stretching from the summit of Kohala Mountain to the Kawaihae coast. At the beginning of the project, TKC conducted listening sessions with regional hunters and community members to better understand their concerns and incorporate them into the project. A perimeter fence will be constructed to protect ‘Eke, which is owned by the Queen Emma Land Company and the State of Hawaiʻi, from hooved animals. After the fence is completed, non-native feral pigs and invasive kāhili (Himalayan) ginger will be removed from the unit to allow the forest to regenerate, thereby replenishing aquifers and reducing erosion and sedimentation of water sources. Vegetation and water quality will be monitored to assess the impacts of the perimeter fence and absence of feral pigs.

An ungulate removal plan will be developed by TKC with input from DLNR and Queen Emma Land Company, which will include strategies such as hunting and trapping conducted by TKC’s watershed stewardship technicians and collaborating with regional hunters. To minimize the possibility of pigs rapidly reproducing within the unit, efforts will be concentrated over several months to ensure pigs are completely removed from the unit during the project period.

In addition, TKC will host Hoaʻāina Stewardship Days at ʻEke and in the Koaiʻa Corridor and Tree Sanctuary below ‘Eke. The half-day learning journeys are designed to care for native forests and deepen relationships between Kohala Mountain’s natural and human communities through knowledge exchanges, kilo (environmental observation), and hands-on activities that include outplanting of native trees and shrubs, seed collection, site preparation, and invasive weed removal.

In 2005, a DOH-approved watershed management plan was developed for Kawaihae (Pelekāne Bay). The plan acknowledged the proliferation of feral goats in the lower watershed, which has led to significant declines in groundcover and widespread erosion due to unchecked grazing and browsing. The upland forest will suffer a similar fate if feral pigs are not properly managed. These animals damage forests by trampling, uprooting, and devouring native plants, and spreading invasive weeds, mosquitoes, and Rapid ʻŌhiʻa Death. They also compact soils, reducing their ability to absorb water. Removing pigs from ‘Eke will allow native plant species to naturally regenerate and support new growth while also protecting, replenishing, and cleansing water sources.

By the end of the four-year project, TKC anticipates positive outcomes including removal of all feral pigs from the unit, measurable improvement in water quality, and increased abundance and biodiversity of native plant species.