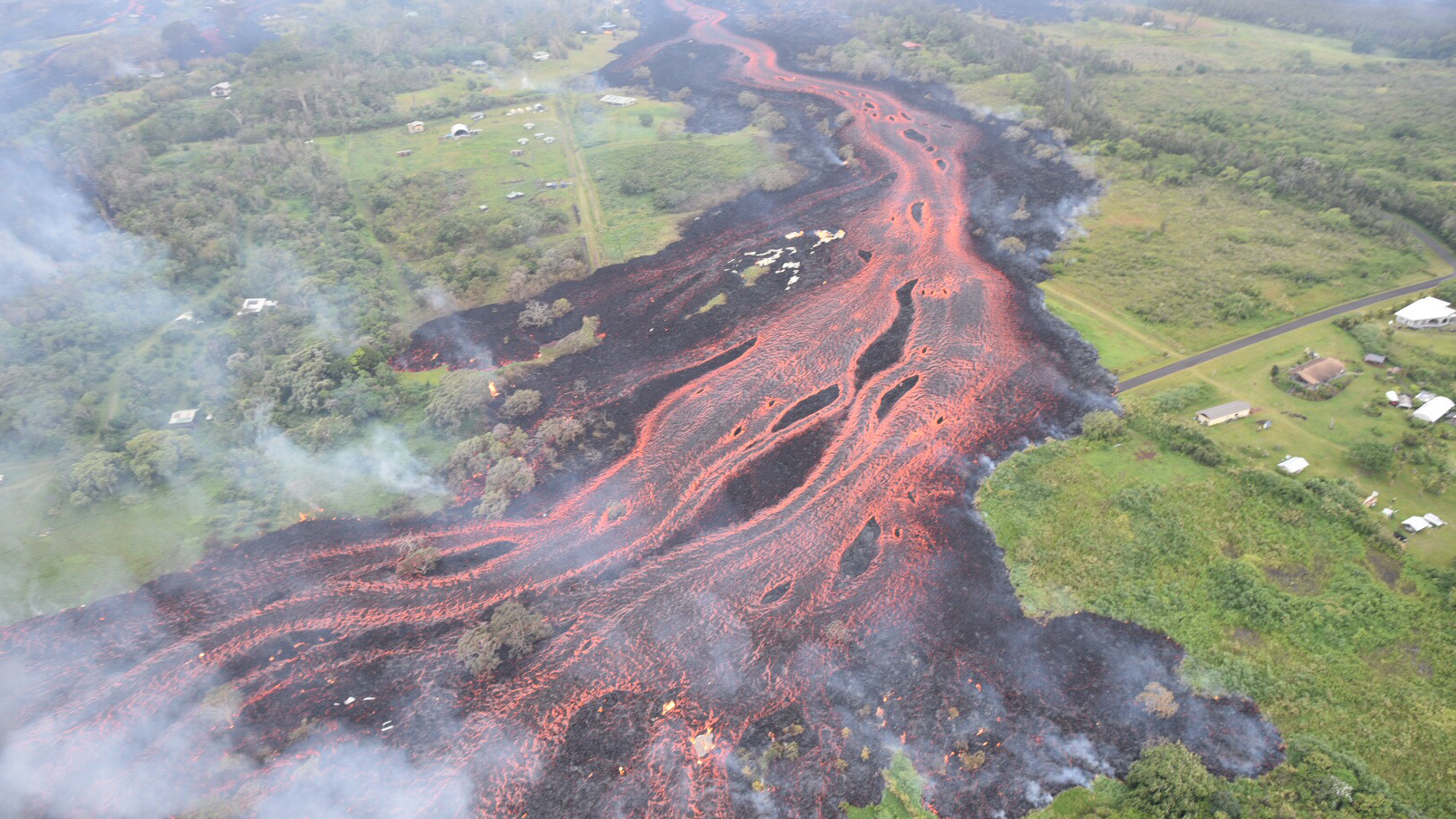 PUNA, Hawaiʻi - In 2019, a team of scientists set out to document and assess the impacts to buildings and infrastructure to better understand how lava flows impact the built environment.

(BIVN) – Kilauea volcano is erupting, however all the lava activity remains conifed to the Halemaʻumaʻu crater at the summit inside Hawaiʻi Volcanoes National Park. Currently, the eruption poses no threat to surrounding neighborhoods or infrastructure.

That was not the case in the summer of 2018, when the eruption on Kīlauea’s lower East Rift Zone destroyed hundreds of homes and covered roads in Puna. The lessons from that eruption are the subject of this week’s USGS Volcano Watch article, written Elinor Meredith, a PhD candidate at the Earth Observatory of Singapore:

Lava flows erupted from the lower East Rift Zone (LERZ) of Kīlauea in 2018 and devastated lower Puna. In 2019, a team of scientists from the USGS, the Earth Observatory of Singapore, and GNS Science in New Zealand set out to document and assess the impacts to buildings and infrastructure to advance understanding of how lava flows impact the built environment.

With the permission of residents, we visited properties along the lava flow margins to meet residents, take photographs, and note the severity and types of damage to structures. In addition to field visits, we assessed more than 8,000 photographs taken by USGS scientists before, during, and after the eruption. These photographs, along with satellite imagery, make up the largest available dataset of lava flow impacts in the world.

We used our data to develop the first set of damage states for lava flows. Damage states are structure damage classifications in a scale ranging from minor damage to major damage and destruction, and they are widely used to categorize buildings damaged from other hazards such as hurricanes or earthquakes. This new set of damage states allowed us to classify all structures in the area by damage severity. Severity ranged from no visible damage, minor melting of plastic due to heat, corrosion of metal by gases, to complete burial.

Damage classification included all types of structures, including homes, water tanks and other farming or industrial buildings. Inundating 14 square miles (35.5 square km) of land, Kīlauea’s 2018 lava flows destroyed 1,839 and damaged 90 structures in total. These are the highest recorded numbers of impacted structures from a lava flow event in Hawaiʻi and one of the highest globally. Later in 2021, lava flows destroyed 2,896 buildings at La Palma, Spain, and destroyed 3,629 homes, 12 schools, and 3 health facilities at Nyiragongo volcano, Democratic Republic of Congo.

The damage severity at each structure was related to lava thickness. The data showed that increased lava flow thickness was generally related to higher damage severity, up to about 6.6 ft (2 m), after which all buildings were destroyed. However, for flow thickness less than 6.6 ft (2 m), there was a range of damage severity along the flow margins. Notably, circular and metal water tanks were resistant to these thinner flows. There were similar findings for the circular structures at Chã das Caldeiras, Cape Verde, during the 2014-2015 lava flows of Fogo volcano, where circular masonry buildings resisted destruction along the flow margins. During these lava flows, 170 structures were destroyed and 90 structures were damaged.

We note that some homes survived in kīpukas and were classified as not damaged at all or damaged less severely. However, these homes were greatly impacted by a lack of access and disruption of utilities. We also noted impacts to homes from fissure steam and gases months after the eruption had ended.

One of our key findings is that damage was recorded up to almost 2,000 ft (600 m) away from the lava flow, likely from secondary processes such as fire spread facilitated by the dried vegetation downwind of the lava channels. This finding suggests that flammable materials on or near properties may cause damage beyond the lava flow.

This work was recently published in the Bulletin of Volcanology and it emphasizes that damage from lava flows can occur beyond the main lava flow itself, especially from later breakout lava flows and channel overflows, or from secondary fires. Findings from this research contribute to the global empirical dataset of lava impacts, and will be used to inform future lava flow damage assessments in Hawaiʻi and beyond.