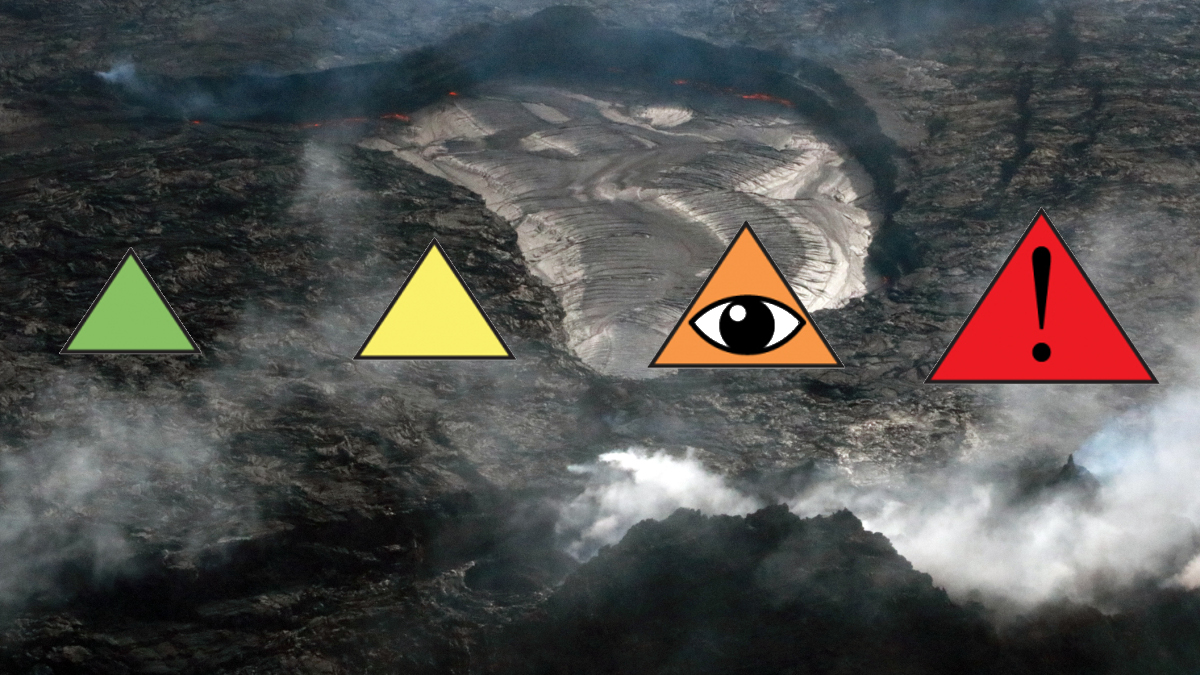 The USGS Volcano Alert Levels, superimposed over a telephoto view of the lava lake within Halema‘uma‘u crater the morning on November 23, 2022 (USGS photo by K. Mulliken)

HAWAIʻI ISLAND - This week, the USGS Hawaiian Volcano Observatory explains the WATCH/ORANGE and the ADVISORY/YELLOW alert levels for Kilauea and Mauna Loa. 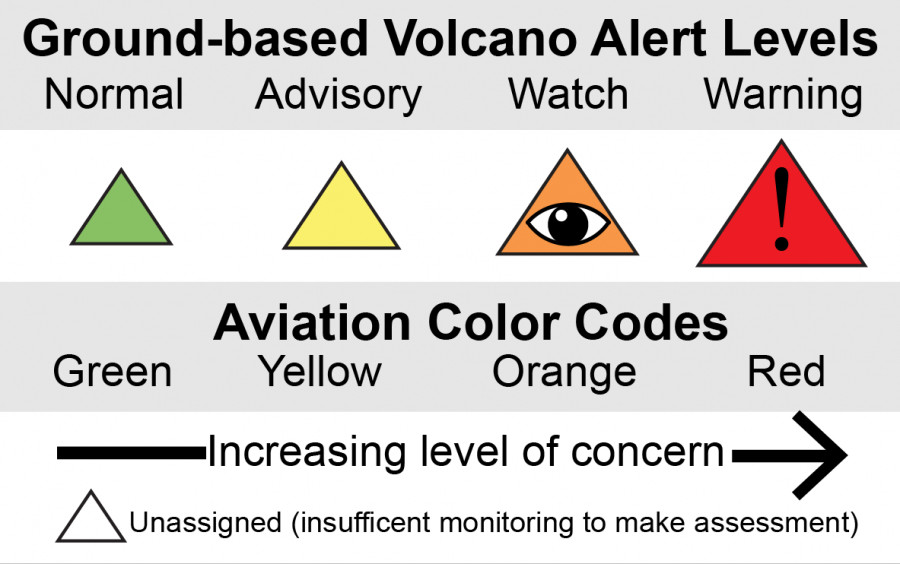 USGS: “The USGS Alert-Notification System for Volcanic Activity includes Volcano Alert Levels, which rank a volcano’s status for people on the ground, and Aviation Color Codes, which rank airborne ash hazards for the aviation sector. This four-tiered system ranges from Normal/Green to Warning/Red to indicate increasing level of concern.”

Mauna Loa is not erupting, and there are no signs of an imminent eruption at this time. Mauna Loa continues to be in a state of heightened unrest, and the USGS Volcano Alert Level and Aviation Color Code remains at ADVISORY / YELLOW.

The U.S. Geological Survey (USGS) Hawaiian Volcano Observatory (HVO) sets the Volcano Alert Level and Aviation Color Code for volcanoes in Hawaii and American Samoa. Currently, Kīlauea is erupting and is at WATCH/ORANGE, Mauna Loa is in elevated unrest and is at ADVISORY/YELLOW, and the remaining six monitored volcanoes are at NORMAL/GREEN.

What do these designations mean, how does HVO assign them, and how can you find out if there is a change?

The first of the two-word designation is the Volcano Alert Level, which reflects the danger the volcano poses to people on the ground and infrastructure (“life and property”). USGS Volcano Alert Levels were established in 2006 and the four terms (NORMAL, ADVISORY, WATCH, WARNING) were chosen to mirror those used at the time by NOAA’s National Weather Service for severe storms and floods.

NORMAL indicates a non-eruptive background state of activity, ADVISORY reflects an activity level elevated above background, WATCH is used when an eruption is likely, or an eruption is occurring with limited hazards, and WARNING means a hazardous eruption is imminent, underway, or suspected.

What does the color mean? The Aviation Color Code is designed specifically for the aviation sector. It was originally developed by the Alaska Volcano Observatory in the 1990s to rapidly communicate to pilots, dispatchers, and air traffic controllers the threats posed to aviation by restless or erupting volcanoes. In the early 2000s, the International Civil Aviation Organization adopted the system, and the Aviation Color Code is now a recommended practice for all volcano observatories around the world.

The Aviation Color Code approach is similar to the Volcano Alert Level (the Aviation Color Code inspired the Volcano Alert Level) but is specifically for the aviation sector. GREEN and YELLOW have the same definition as NORMAL and ADVISORY, while ORANGE (eruption likely or an eruption is occurring with no/minor ash) and RED (eruption with significant ash emission is imminent, underway, or suspected) are focused on whether there is a threat to aviation posed by volcanic ash.

To determine the appropriate Volcano Alert Level and Aviation Color Code, HVO monitors volcanic activity around the clock with seismometers, cameras, satellites, and other instruments that can detect signs of magma moving underground or lava and ash actively erupting.

Knowing exactly when to change the Volcano Alert Level and Aviation Color Code can be challenging. We do not have set thresholds: each situation is different. We decide by looking at all monitoring data, previous unrest and eruption patterns, and what is known about the processes occurring at the volcano. Typically, there is extended discussion among HVO scientists before a change is made. Sometimes the designation is unchanged for many years, although occasionally, frequent changes are warranted.

Kīlauea’s current status is WATCH/ORANGE. The ongoing eruption is confined within Halemaʻumaʻu crater—posing no threat to life or property—and the eruption has no to minor volcanic ash emission.

Mauna Loa’s current status is ADVISORY/YELLOW. This reflects elevated rates of earthquakes and ground deformation above background. This activity indicates that magma is being supplied to Mauna Loa’s magma chamber, but at this stage magma is not moving beneath the ground to erupt on the surface. If signs of magma on its way to erupt appear, or if Mauna Loa returns to background levels of activity, HVO will change Mauna Loa’s Volcano Alert Level and Aviation Color Code accordingly.

Volcano Alert Level changes are announced in a USGS Volcanic Activity Notification, which explains why the change was made and what is likely to happen next based on the current scientific consensus (Aviation Color Code changes are also announced in a Volcano Observatory Notice for Aviation). These notifications are posted on our website and social media. You can subscribe to get them delivered by email or text through the Volcano Notification Service.

In summary, the Volcano Alert Level and Aviation Color Code communicates the degree and, in some cases, the time frame of a particular volcanic threat for people on the ground and in the aviation sector. With this information, public safety and emergency managers, individuals and families, and businesses can take appropriate and timely steps to keep our communities safe.