Images courtesy USGS Hawaiian Volcano Observatory, National Park Service, and Paradise Helicopters. A synthesized voice was utilized in the narration for this story.

HAWAIʻI ISLAND - Currently, lava from the eruption is "heading in the best possible direction, which is away from our communities", officials say. 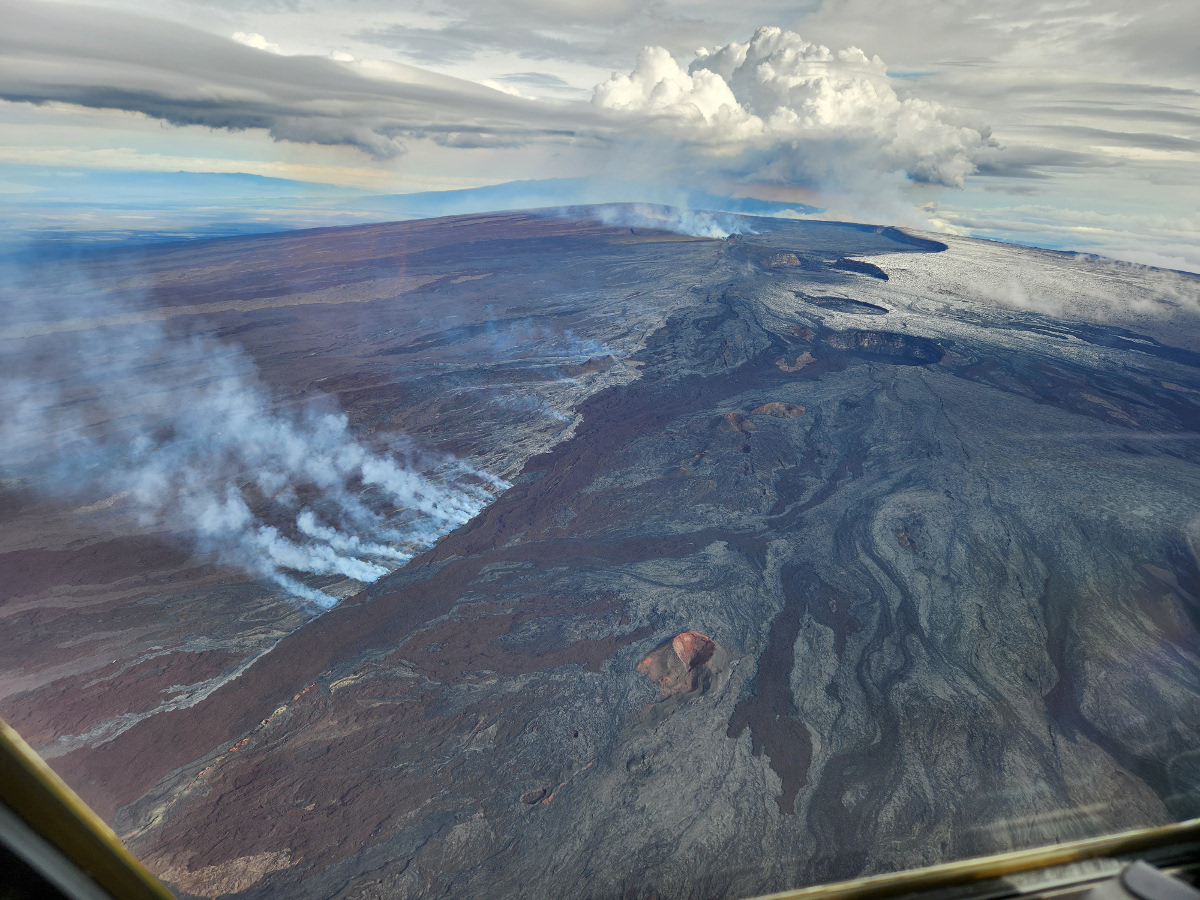 USGS: “Aerial view of Mauna Loa summit with Lua Hou in the foreground followed by Lua Hohonu, South Pit, and Mokuʻāweoweo summit caldera. A small dusting of snow covers the ground east of the summit. The steaming fissure was active during the beginning of the eruption, but this morning the lava in the summit caldera had already cooled to a black color. The white plume in the background is rising from the fissures in the Northeast Rift Zone.” (USGS photo J. Schmith)

(BIVN) – New video of the eruption high up on Mauna Loa is being shared tonight across social media. The current direction of the lava flows, which shifted this morning the Northeast Rift Zone, indicates to emergency officials that there is no imminent threat to the community at this time.

“Our team is on full alert and is prepared to respond to whatever situation may arise as a result of the Mauna Loa eruption,” said Mayor Mitch Roth in a Monday news release. “That said, we’ve been told that the lava is heading in the best possible direction, which is away from our communities. We’ll continue to monitor the situation and will be providing updates to the community regularly. Until then, we thank our State and County partners, departments, and agencies for their quick action and attention to every detail.” 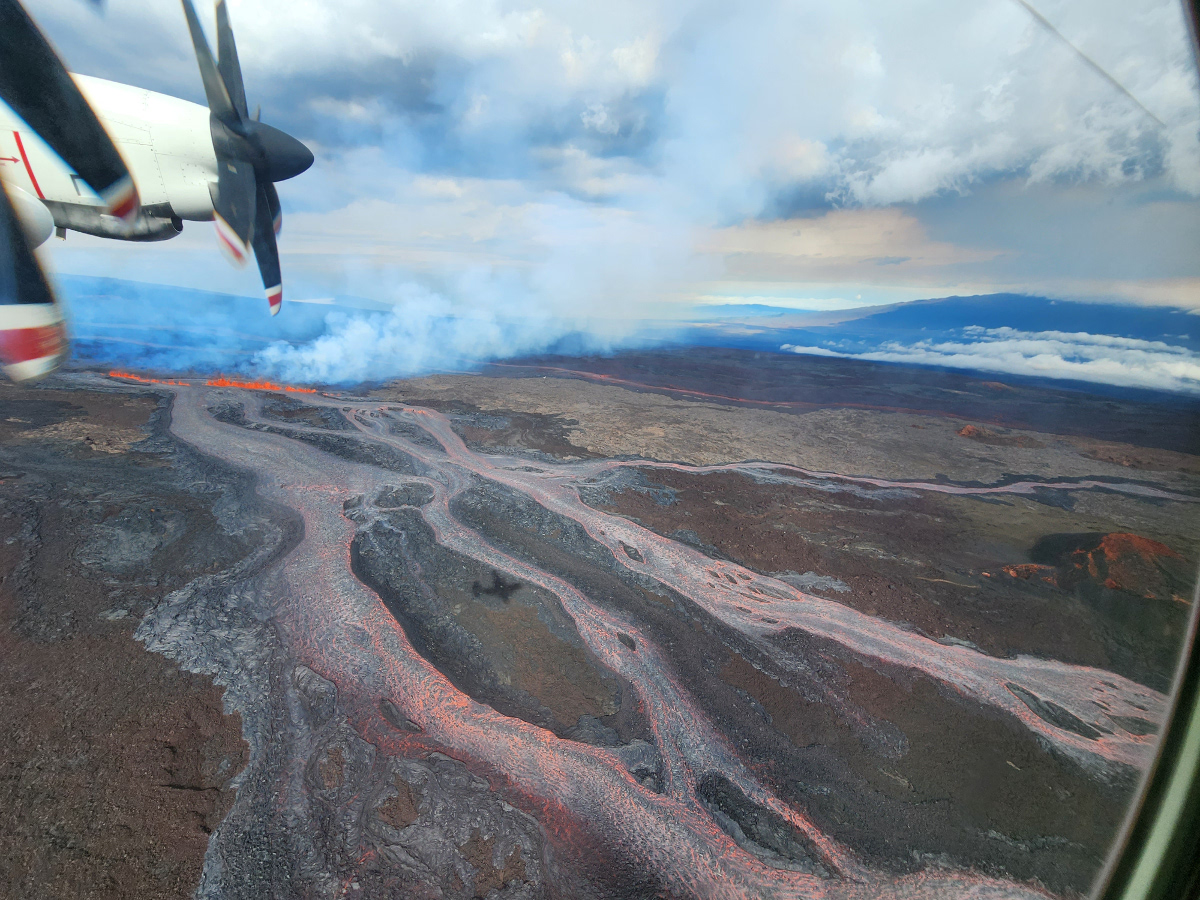 Aerial photo of a fissure and lava flows on Mauna Loa’s Northeast Rift Zone at approximately 9:30 a.m. HST on November 28, 2022. The photo view is to the NW, with Mauna Kea on the right hand side of the image. USGS photo by K. Lynn.

The current Mauna Loa Volcano Alert Level remains at WARNING / RED. According to the USGS HVO just before 5 p.m. HST:

The eruption of Mauna Loa continues on the Northeast Rift Zone. Three fissures erupted and as of 1:30 PM, only the lowest of the three fissures was active. Estimates of the tallest fountain heights are between 100–200 ft (30 – 60 m), but most are a few yards (meters) tall. The fissures sent lava flows to the northeast and parallel to the rift zone. Lava flows from the two higher fissures moved downslope but stalled about 11 miles (18 km) from Saddle Road. Fissure 3 is currently feeding lava flows moving east parallel to the Northeast Rift Zone. These remain at above 10,000 feet elevation and over 10 miles (16 km) away from Saddle Road. We do not expect upper fissures to reactivate. However, additional fissures could open along the Northeast Rift Zone below the current location, and lava flows can continue to travel downslope.

There is no active lava within Moku’āweoweo caldera, and there is no lava erupting from the Southwest Rift Zone. We do not expect any eruptive activity outside the Northeast Rift Zone. No property is at risk currently. There is a visible gas plume from the erupting fissure fountains and lava flows, with the plume primarily being blown to the Northwest.

The communities in South Kona near and around the Southwestern Rift Zone appear to be in the clear, as long as the eruption follows the patterns that have been observed historically.

Ken Hon, the Scientist-in-charge of the US Geological Survey Hawaiian Volcano Observatory, spoke at a virtual media briefing on Monday:

“We know in any historic precedence that there has never been a eruption of Mauna Loa that activated both rift zones at the same time or during the same eruption. So we presume at this point that all of the future activity is going to be on the Northeast Rift Zone of Mauna Loa, and not on the Southwest Rift Zone. So those residents in that area do not have to worry about lava flows.

Currently, right now, because the Northeast Rift Zone empties into the Saddle Area, there’s no real habitation up there. Pōhakaloa Training Area, their facilities are outside of where we consider any initial lava flows to go, and the only real facility up there is the Mauna Loa weather Observatory, which is not directly threatened, but there’s a chance its road could perhaps be cut by these lava flows.” 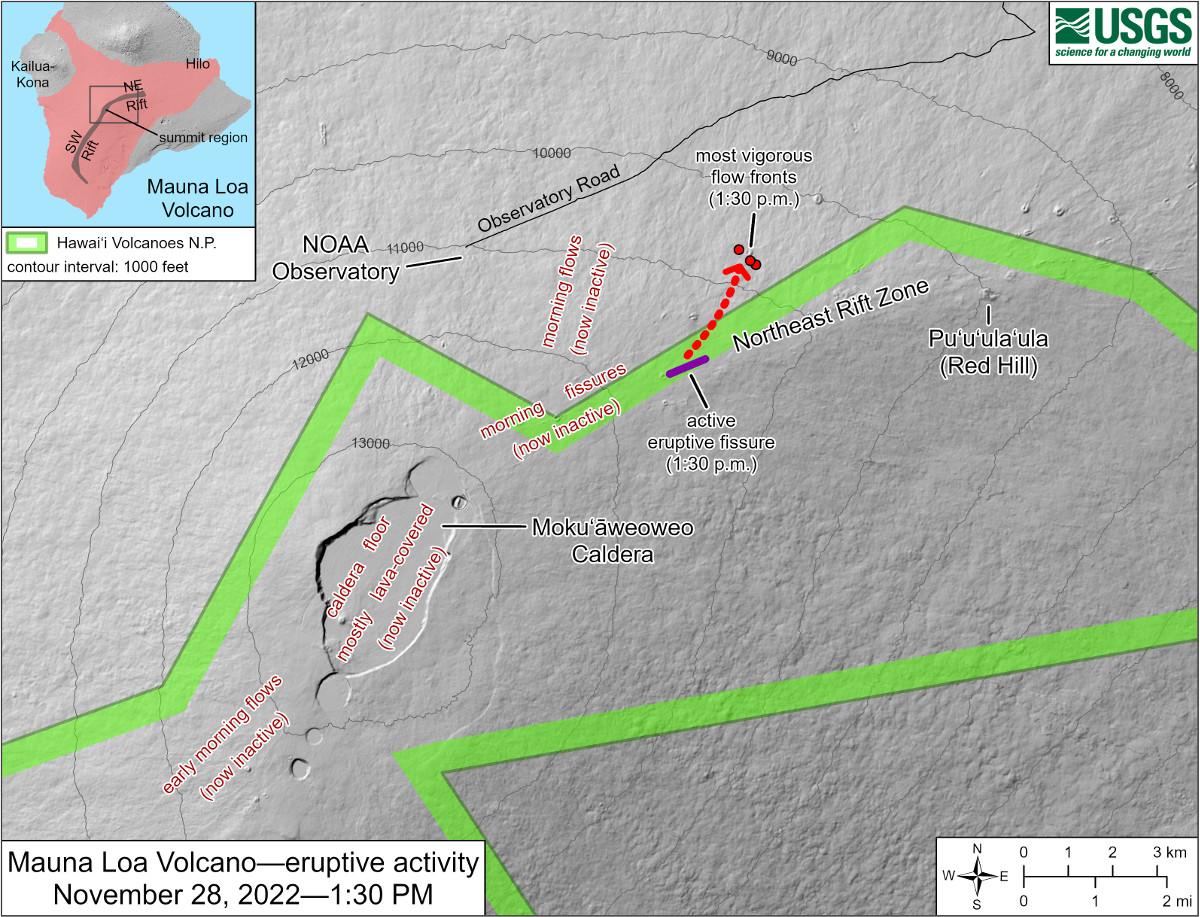 USGS: “An eruption of Mauna Loa volcano started at 11:30 p.m. on Sunday, November 27, 2022. Initial fissures covered the floor of Moku‘āweoweo caldera with new lava, but this area was mostly inactive by the time HVO field crews arrived after sunrise on Monday morning. Other fissures spilled lava to the southwest of the summit region, but this area was also inactive by that time. HVO field crews observed active lava flowing to the north of the upper Northeast Rift Zone, in the direction of the access road to the NOAA Mauna Loa Observatory, but not reaching it. New fissures opened in a northeasterly direction along the rift throughout the day. By the time HVO field crews left the area (due to adverse weather) at 1:30 p.m., most of the eruptive activity was focused at a single fissure marked here in dark purple. This fissure was sending lava flows in multiple directions, but the most vigorous and farthest travelled was a set of three lobes moving to the northeast, marked here by red dots. Cloudy weather hampered mapping efforts on Monday; more complete lava flow maps are expected in the coming days.”

“In the long term: eventually, this kind of lava flow is very similar to what happened in 1984 and potentially could threaten populated areas around Hilo, but we’re looking at somewhere around a week before we expect lava to get anywhere near that direction. We’re hoping that it will parallel the 1984 eruption in becoming more viscous as time goes on, hitting flatter slopes around the Saddle that slow it down. And this actually prevented the lava from getting into Hilo, and historically this has been the case. Only a couple of eruptions have made it into the outskirts of what is current Hilo, so we’re hoping that this lava flow will.

It will be a big spectacular event. It occupies a fairly small proportion of the island and hopefully it will have relatively minor effect on the residents and visitors to the island.”

The Hawaiʻi Department of Health is also advising the public to be prepared for air quality impacts due to the Mauna Loa eruption. They say the eruption could cause vog conditions, ash in the air, and levels of sulfur dioxide to increase and fluctuate in various areas of the state.

The following precautionary measures are advised: