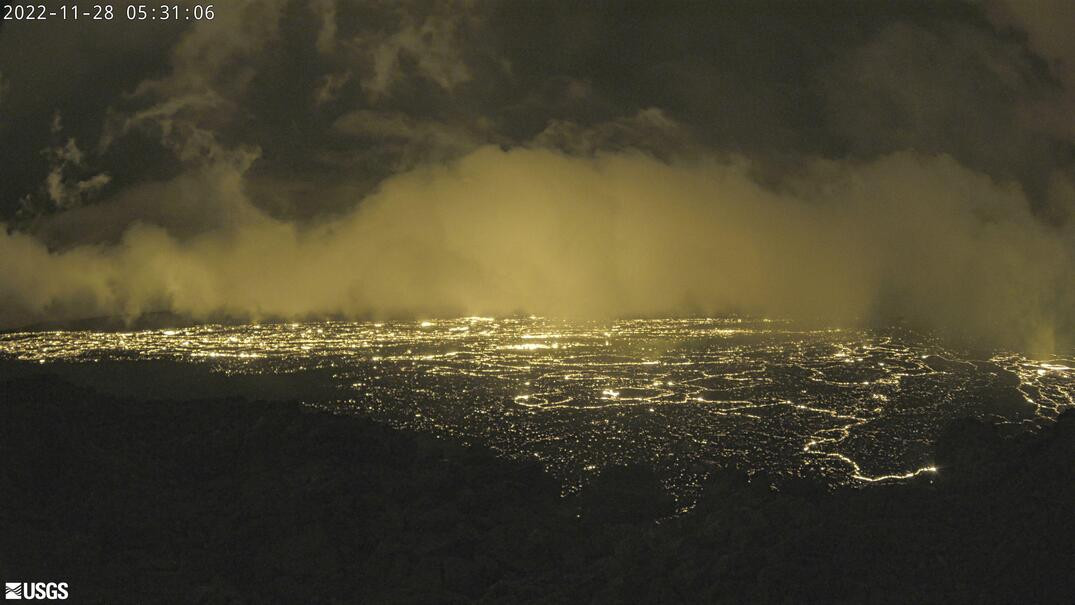 Image from a temporary USGS research camera positioned on the north rim of Mokuʻāweoweo, showing the new eruption in the summit caldera of Mauna Loa volcano.

HAWAIʻI ISLAND - Lava remains at the summit area as of Monday morning, however shelters have been opened in Kaʻū and Pahala.

UPDATE – (7:15 a.m. on Monday, November 28) – “The USGS Hawaiian Volcano Observatory confirms that lava has exited Mauna Loa summit and can be seen on the northeast flank,” a Hawaiʻi County Civil Defense message stated. “The northeast flank is not populated and does not pose a threat to any communities at this time.” 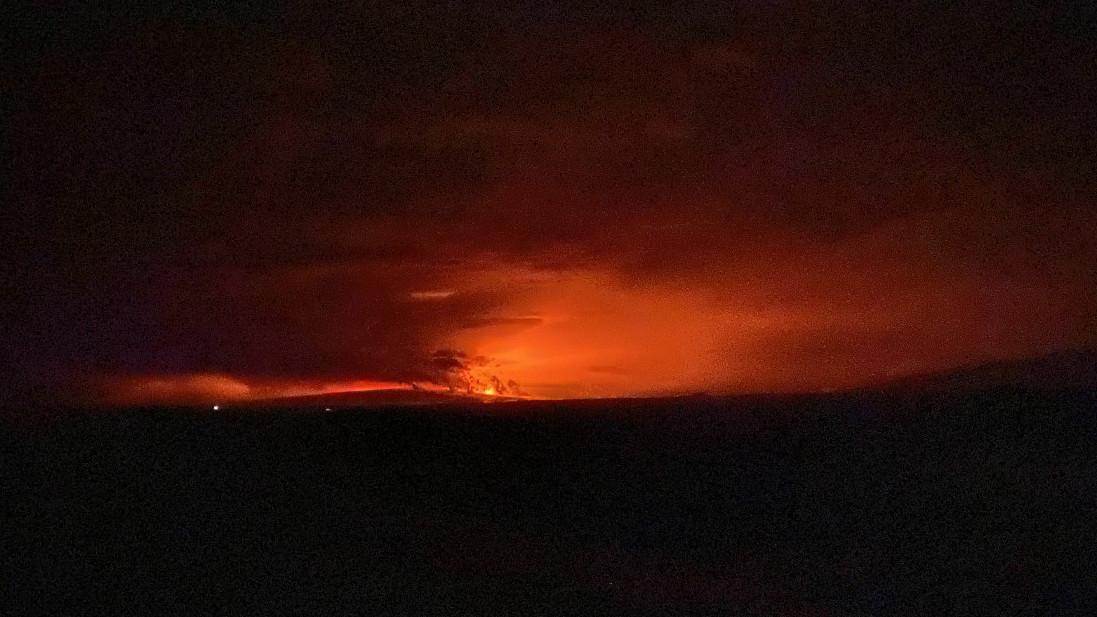 USGS: “Mauna Loa eruption as viewed from Waikoloa at about 1:25am local time (HST). The eruption is occurring from the summit of the volcano, though lava has overflowed the caldera.”

(BIVN) – For the first time in decades, Mauna Loa volcano is erupting.

At 11:30 p.m. HST on Sunday evening, after months of unrest but without indictaion that an eruption was imminent, an eruption began in Moku‘āweoweo, the summit caldera of Mauna Loa, inside Hawai‘i Volcanoes National Park.

“At this time, lava flows are contained within the summit area and are not threatening downslope communities,” the USGS Hawaiian Volcano Observatory stated. “Winds may carry volcanic gas and possibly fine ash and Pele’s hair downwind.”

The USGS provided this important information:

Based on past events, the early stages of a Mauna Loa eruption can be very dynamic and the location and advance of lava flows can change rapidly.

If the eruption remains in Moku‘āweoweo, lava flows will most likely be confined within the caldera walls. However, if the eruptive vents migrate outside its walls, lava flows may move rapidly downslope.

HVO is in close consultation with emergency management partners and will be monitoring the volcano closely to provide further updates on activity. As soon as possible, HVO will conduct aerial reconnaissance to better describe the eruption and assess hazards.

The County of Hawaiʻi has already opened shelters in Kaʻū at the Robert Herkes Gymnasium in Pāhala and at the Old Airport Gymnasium (Kailua Park) in Kailua-Kona amidst reports of self-evacuations along the South Kona coast.

“Multiple images have surfaced on social media indicating lava activity outside of the caldera,” the County stated at 2 a.m. “At this time, no lava migration into a rift zone has been confirmed.”

“All vents remain restricted to the summit area,” wrote the USGS in a 2:43 a.m. message. “However, lava flows in the summit region are visible from Kona. There is currently no indication of any migration of the eruption into a rift zone.”