Images courtesy USGS Hawaiian Volcano Observatory, U.S. Coast Guard, and Hawaii DLNR. A synthesized voice was utilized in the narration for this story.

HAWAIʻI ISLAND - Video from the U.S. Coast Guard and the Hawaiʻi Department of Land and Natural Resources provide new views of the Mauna Loa eruption. 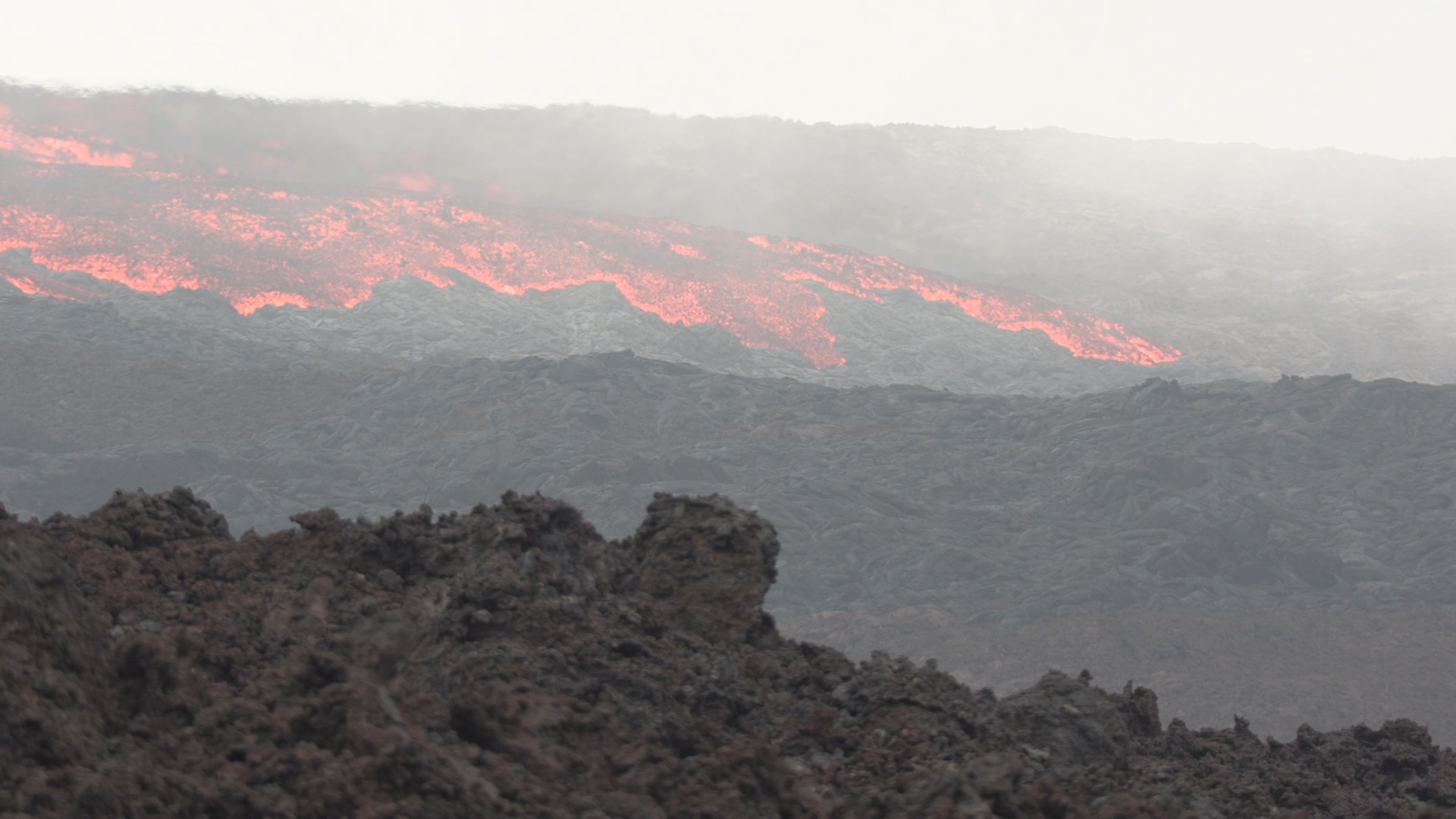 Image from video by Hawaii DLNR, taken from the Mauna Loa Observatory Road.

Of the three fissures that were erupting, only one was still active by Monday afternoon. Scientists estimated the tallest fountain heights were between 100 to 200 feet, or about 30 to 60 meters, but most are a few yards tall. As of early Monday evening, the active fissure was feeding lava flows that were moving east parallel to the rift zone, above 10,000 feet elevation and over 10 miles, or 6 kilometers, away from Saddle Road.

Officials said Monday that the lava is currently “heading in the best possible direction, which is away from island communities.” However, it is still early in the eruption and there could still be changes. For example, scientists say additional fissures could open below the current location, and lava flows can continue to travel downslope.

One the ground, officials were busy securing the area around the eruption, such as the Mauna Loa Forest Reserve, and manning roadblocks. From the Hawaiʻi Department of Land and Natural Resources:

The now 21-hour-long eruption of Mauna Loa has prompted the DLNR Division of Forestry and Wildlife (DOFAW) to close the Mauna Loa Forest Reserve and the Kipuka ‘Ainahou Nēnē Sanctuary for at least 90 days. DOFAW Hawai‘i Island Branch manager Steve Bergfeld has the discretion to close additional areas as needed that are impacted by the ongoing eruption. Additional closures announced tonight include ʻĀinapō Trail and cabin, and the Kapāpala Forest Reserve

Earlier today, officers from the Hawaii Police Department (HPD) and the DLNR Division of Conservation and Resources Enforcement (DOCARE) set up and began manning a roadblock at the intersection of Daniel K. Inouye Highway (Saddle Road) and the Mauna Loa Observatory Access Road.

Above the roadblock, Bergfeld got a glimpse of the lava flow which he estimated at about one-mile-long. Lava appeared to be flowing slowly from the mountain’s caldera, which is continuing to send large plumes of gas and ash high into the sky. Much of the 50,000-acre Mauna Loa Forest Reserve is covered in lava from previous eruptions.

Bergfeld and his staff are concerned that if lava begins flowing the opposite direction and into the Puʻu Makaʻala Natural Area Reserve, years of restoration work could be destroyed. Puʻu Makaʻala has been fenced to keep feral ungulates out to create habitat for numerous endangered Hawaiian forest birds and to re-establish native vegetation. It’s much too early to tell if the eruption is impacting other natural or cultural resources in the forest reserve. There are numerous other State forest reserves and natural area reserves on both sides of Mauna Loa. DOFAW teams will continue monitoring lava flows as they occur. Bergfeld says everyone’s top priority is protecting life and property.

The U.S. Coast Guard Joint Rescue Coordination Center Honolulu answered the call from the Hawaii County Civil Defense, supporting an aerial observation flight of the eruption. A C-130 Hercules aircrew from Air Station Barbers Point conducted the flight, with various government officials on board. Video footage was taken from the C-130 shows the progression of the lava flow.