HAWAIʻI ISLAND - The lava flow has had minimal movement towards Saddle Road today, while a new plan for motorists driving up to see the eruption was announced on Thursday. 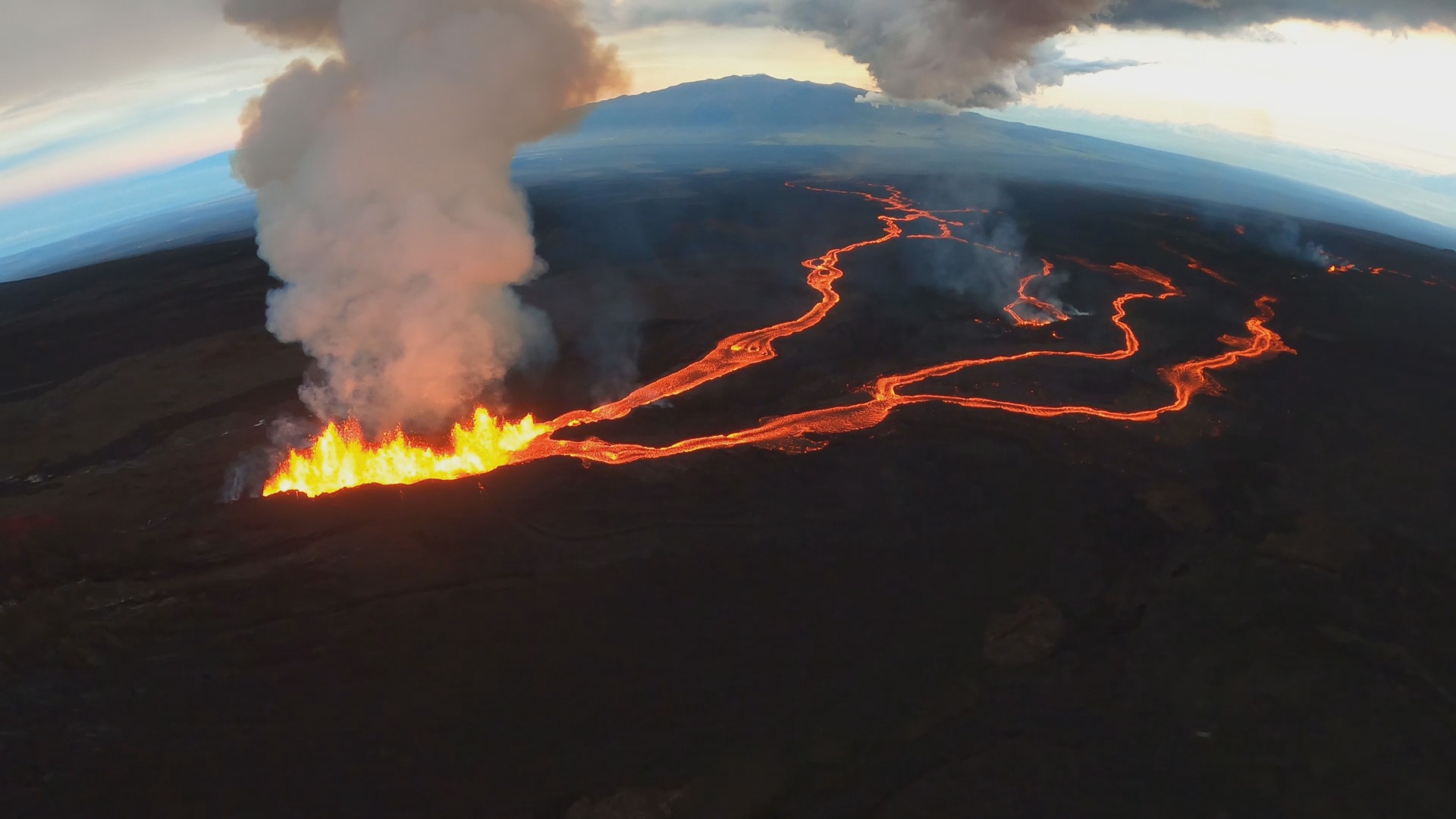 (BIVN) – The current Volcano Alert Level for Mauna Loa remains WARNING / RED, as the eruption of lava continues on the Northeast Rift Zone.

From the USGS Hawaiian Volcano Observatory at 9 a.m. HST:

The Northeast Rift Zone eruption of Mauna Loa continues, with two active fissures feeding lava flows downslope. Fissure 3 remains the dominant source of the largest lava flow. The fissure 3 lava flows are traveling to the north toward the Daniel K. Inouye Highway (Saddle Road) but have reached relatively flatter ground and have slowed down significantly as expected. Advance of the largest flow slowed over the past 24 hours to a rate of 0.025 miles per hour (40 meters per hour). As of 7 a.m. HST today, the flow front is about 3.4 miles (5.4 km) from the Daniel K. Inouye Highway (Saddle Road). Advance rates may be highly variable over the coming days and weeks due to the way lava is emplaced on flat ground. At the rate observed over the past 24 hours, the earliest the lava flow might be expected to reach the Daniel K. Inouye Highway (Saddle Road) is one week. However, there are many variables at play and both the direction and timing of flow advance are fluid and are expected to change over periods of hours to days.

Fissure 4 is still active with lava flows moving toward the northeast at a rate of 0.04 miles per hour (60 meters per hour). The northeast fissure 4 lava flow crossed the Mauna Loa Weather Observatory road overnight. A small lobe is moving to the east from fissure 4 at a slower rate than the main lobe. Volcanic gas plumes are lofting high and vertically into the atmosphere. Pele’s hair (strands of volcanic glass) is falling in the Humu‘ula Saddle area.

Our seismic monitoring detects tremor (high rates of earthquakes) in the location of the currently active fissures. This indicates that magma is still being supplied, and activity is likely to continue as long as we see this signal.

There is no active lava within Moku’āweoweo caldera, and the Southwest Rift Zone is not erupting. We do not expect any eruptive activity outside the Northeast Rift Zone. No property is at risk currently.

USGS HVO Scientist-in-charge Ken Hon repeated most of the information relayed in the 9 a.m. update during a media briefing on Thursday morning. He also commented on the uncertainty surrounding the future direction of the lava flow, as it spreads out over the flat ground.

“We’re right on the divide between lava going to the east or the west side of the island,” Hon said. “We don’t really know which way the lava flow will ultimately go, if this does end up being the main lava flow for the eruption. So, there’s a lot of uncertainty here.”

The State and County of Hawaiʻi, in partnership with the Pōhakuloa Training Area, say they have come up with a traffic mitigation plan that will allow motorists a safe way to drive up the Saddle for a view of the eruption.

Hawaiʻi County Civil Defense administrator Talmadge Magno said the plan will incorporate some of the internal roads, such as the old Saddle Road, that traverse through PTA, in order to gve people a one-way route off the Daniel K. Inouye Highway where they can park and watch the lava flow.

“Despite the fact that the lava has slowed, we continue to work with the different industries and partners,” in case the highway gets taken out, Magno said.