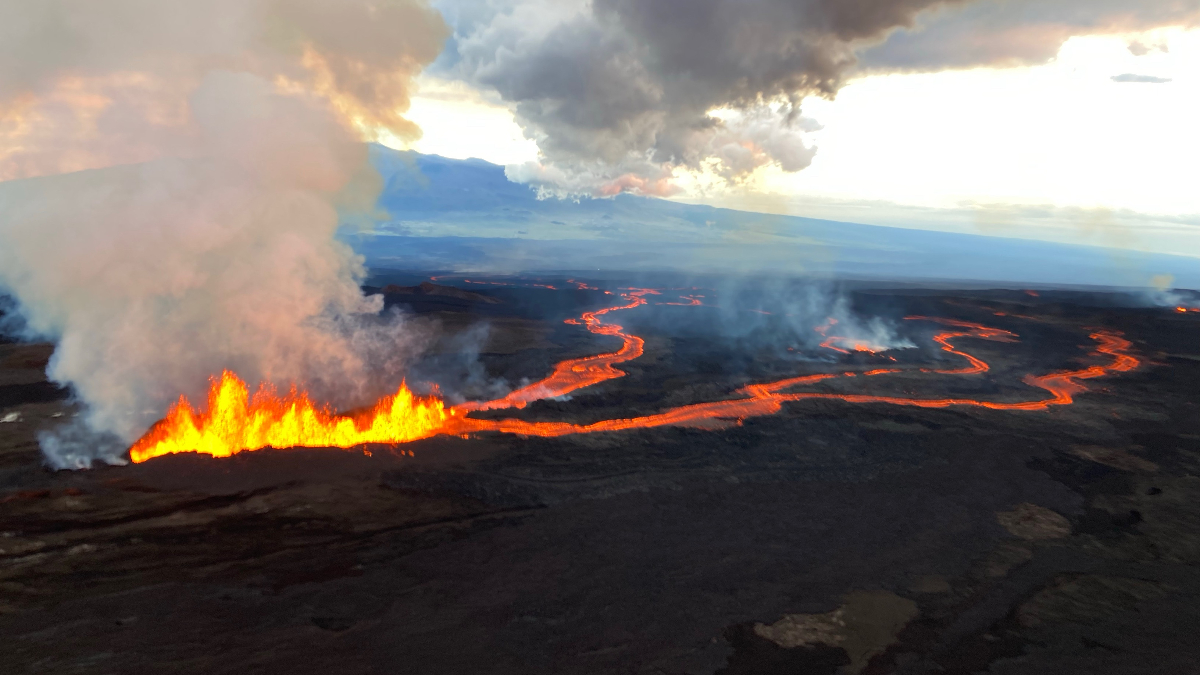 HAWAIʻI ISLAND - The Daniel K. Inouye Highway is open in both directions and no communities are threatened at this time, as the eruption of Mauna Loa continues on the Northeast Rift Zone. 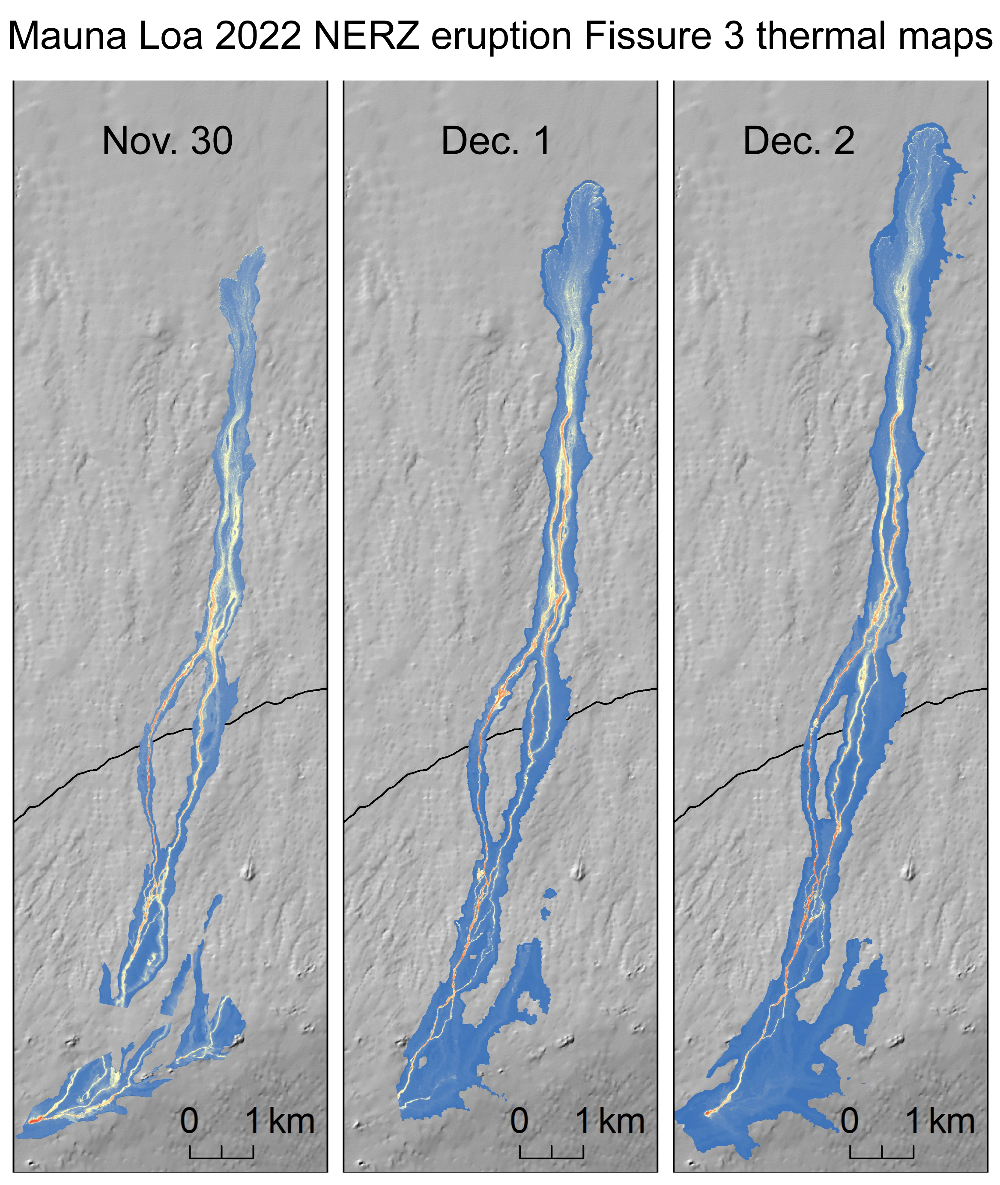 USGS: “Helicopter overflights on November 30, December 1, and December 2, 2022, allowed for aerial visual and thermal imagery to be collected of the Northeast Rift Zone eruption of Mauna Loa. These maps show evolution of the lava flow from fissure 3 over those days. The scale of the thermal map ranges from blue to red, with blue colors indicative of cooler temperatures and red colors indicative of warmer temperatures.”

(BIVN) – The eruption of Mauna Loa, nearly one week old, continued overnight into Sunday. As of 1 p.m. on Saturday (December 3), the lava flow produced by the one remaining active fissure (Fissure 3) on the Northeast Rift Zone was about 2.4 miles from the Daniel K. Inouye Highway, aka Saddle Road. The flow front has advanced at an average rate of about 40 feet per hour over the past day.

At 10:45 p.m. Sunday evening, November 27, USGS Hawaiian Volcano Observatory (HVO) scientists were alerted to an earthquake swarm beneath Mauna Loa. Before an hour had gone by, lava had broken the surface within Moku‘āweoweo, the summit caldera, for the first time in 38 years.

For HVO and Island of Hawai‘i residents, this eruption did not come as a surprise. Increasing rates of earthquake activity and ground deformation on Mauna Loa began in late September, providing clues to the accumulating magma below the surface.

HVO has been working with the County of Hawai‘i Civil Defense Agency (HCCDA) to increase awareness of the potential for a Mauna Loa eruption through community meetings and other messaging. One important message at those meetings was that things could escalate very quickly, and they did.

HVO staff and County of Hawai‘i officials closely monitored the eruption overnight, tracking activity for any migration. The eruption had begun in Mauna Loa’s summit, as expected, and the question on everyone’s mind was whether the eruption would move into a rift zone and if so, which one.

Of the 33 Mauna Loa eruptions since 1843, all have started within Moku‘āweoweo. About half then migrated into one of the two rift zones or, rarely, a radial vent on the northwest flank. None of the eruptions have jumped from one rift zone to another.

Mauna Loa followed the pattern of previous eruptions when a vent opened high on the Northeast Rift Zone the morning of November 28, with three more opening over the next day. Lava flows began to travel north and northeast on the remote northeast flank. The summit vents ceased erupting.

As of this morning, Thursday, December 1, two fissure vents remain active on Mauna Loa’s Northeast Rift Zone. Lava flows are extending to the north and northeast. The flows have traveled 9.4 miles (15 km) so far. 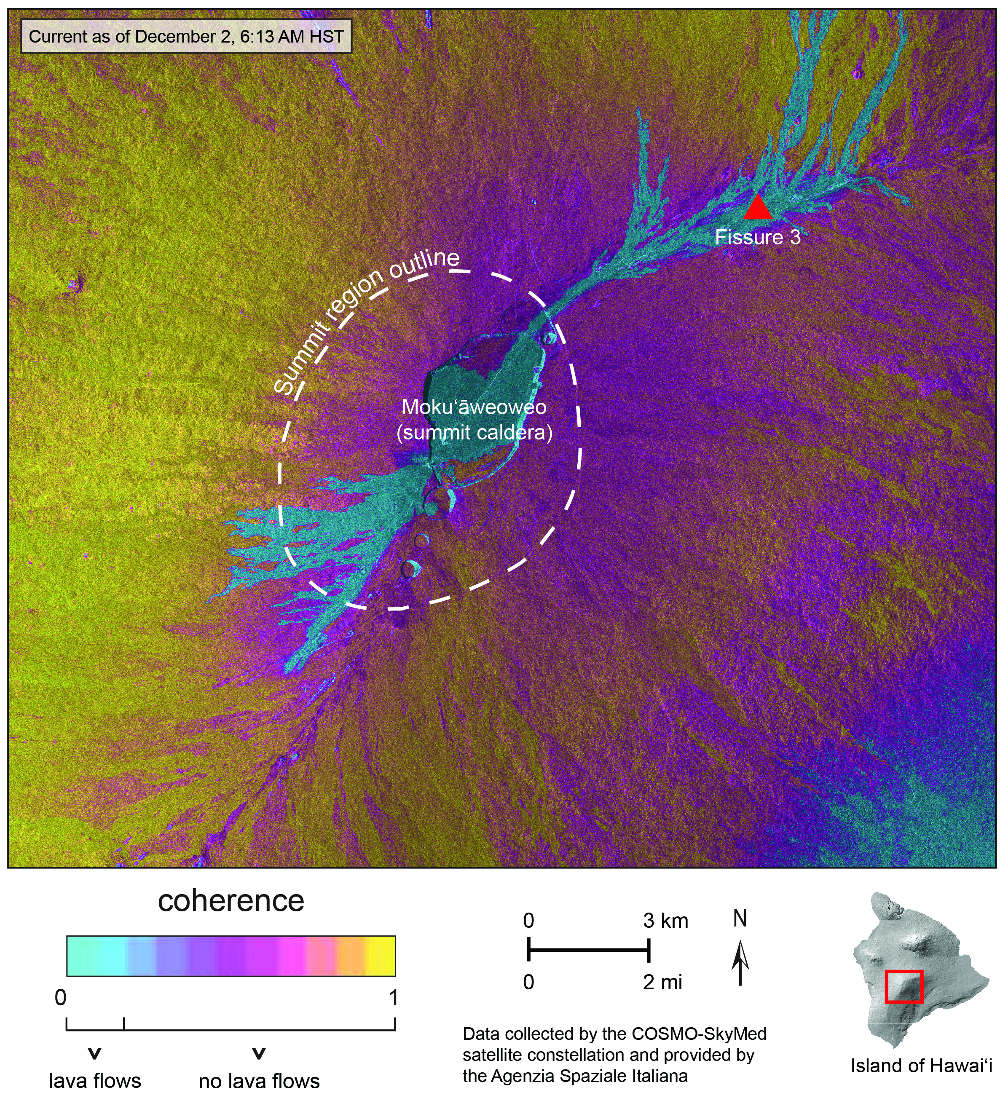 USGS: “This map shows areas of surface change as determined through a comparison of satellite radar images acquired on November 16, 2022 and December 2 at 6:13 a.m. HST. Bluish colors show areas of major change and indicate lava flows that were active during the time spanned. Pink and yellow colors show areas of no surface change. The image depicts lava flow activity in the SW summit region, within Mokuʻāweoweo (Mauna Loa’s summit caldera), and along the NE Rift Zone, where the eruption has localized at Fissure 3. Though the SW activity appears to have occurred outside of Mokuʻāweoweo, the structural definition of Mauna Loa’s summit region is larger than the main topographic caldera and is approximated by the dashed white line. These data will be used by HVO geologists to precisely map the areas covered by lava flows during the first few days of the eruption, since they provide high-resolution and comprehensive views that are not available from other data. Stay tuned for the forthcoming HVO map! Data are from the COSMO-SkyMed constellation of radar satellites, provided by the Italian Space Agency (Agenzia Spaziale Italiana) through the Hawaiʻi Supersite.”

The eruption has provided spectacular views from the Daniel K. Inouye Highway (Saddle Road) that bisects the Island of Hawai‘i; though it has also created heavy traffic in the area and is generating vog (volcanic air pollution) downwind.

The flow front was 3.4 miles (5.4 km) away from the Highway this morning. Initially, the lava was flowing on steep slopes; however, over the past day, the main lava flow from fissure 3 has reached flatter ground and slowed significantly. On flat ground, lava flows spread out and inflate. Individual lobes may advance quickly, and then stall. Additional breakouts may occur from the lava channels upslope.

There are many variables at play and both the direction and timing of flow advance will change over periods of hours to days. HVO and HCCD are working together closely to monitor the activity and keep Island of Hawai‘i residents and visitors informed.

As of now, no homes or property have been directly impacted or are in imminent danger due to the lava flow.  Nonetheless, it is still a good idea to practice “All Hazards” readiness.  Information on putting together an “All Hazards” plan for you and your family is available at this HCCDA website.

For residents, visitors, and scientists alike, this eruption is an amazing opportunity to observe, document, and learn.

HVO staff have been busy tracking the dynamic fissures and lava flows, deploying new instruments to monitor the eruption, and analyzing samples of the eruption.

Erupted lavas have undergone a rapid analysis by HVO and our partners at the University of Hawai‘i Hilo. Preliminary comparison of new lava chemistry with other Mauna Loa eruptions shows that the new lavas are not leftover from the 1984 eruption but represent a new intrusion of magma into the summit and Northeast Rift Zone, consistent with geophysical signals leading to the eruption.

What can we expect moving forward? Past Mauna Loa Northeast Rift Zone eruptions have typically lasted a few weeks; though, in one instance, a Northeast Rift Zone eruption continued for over a year. The main lava flow has slowed significantly and is currently in a flat portion of Humu‘ula Saddle region, making it difficult to estimate when or if the flow will impact Daniel K. Inouye Highway.

HVO plans to release updates twice a day in the morning and afternoon until activity changes. These updates, as well as other multimedia, can be accessed on the USGS HVO website.