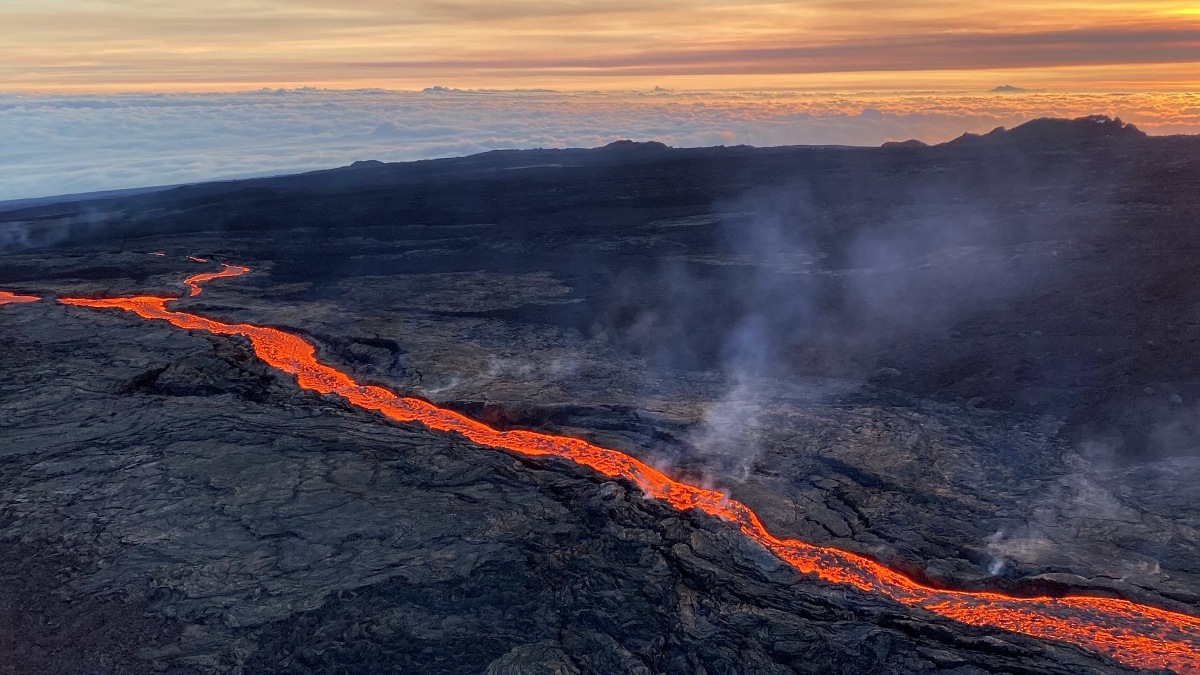 USGS: “Aerial view of fissure 3 eruption lava channel on the Northeast Rift Zone of Mauna Loa the morning of December 4, 2022. Fissure 3 has produced several lava channels that are winding their way down the northeast slope of Mauna Loa, coalescing into a single flow front. As of 7 a.m. today, December 4, the flow front was about 2.3 mi (3.6 km) from the Daniel K. Inouye Highway (Saddle Road).” (USGS image by L. DeSmither)

HAWAIʻI ISLAND - On Sunday, the Aviation Color Code for Mauna Loa was changed from RED to ORANGE. Lava is still over two miles from the Saddle Road. 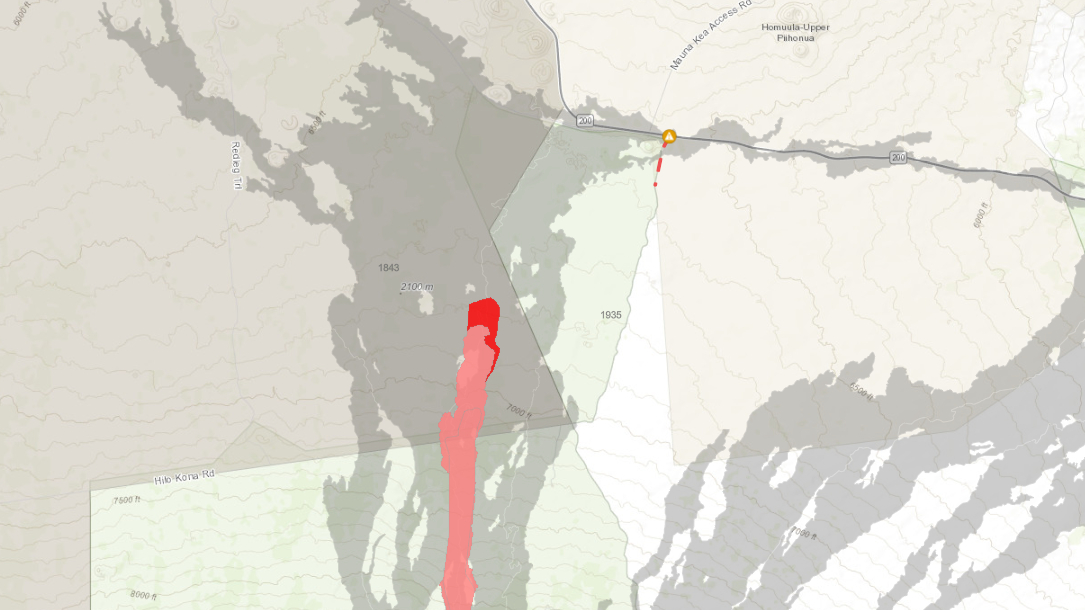 From the USGS Hawaiian Volcano Observatory on Sunday:

The eruption has now focused at a single vent, fissure 3, at an elevation of 11,500 ft (3510 m) along the Northeast Rift Zone of Mauna Loa. Lava fountaining at the vent has been approximately 100 feet (33 m) tall over the past day, depositing fragments of volcanic material in the area near the vent. Pele’s hair (small strands of volcanic glass) are being wafted great distances and have been reported as far as Laupāhoehoe, a community on the northeast coastline of the Island of Hawai’i about 23 miles (37 km) north of Hilo and 37 mi (59 km) northwest of fissure 3.

Sulfur dioxide (SO2) emission rates of approximately 180,000 tonnes per day (t/d) were measured on December 1, 2022 and remain elevated at this time. Volcanic gas is rising high and vertically into the atmosphere before being blown to the west at high altitude, generating vog (volcanic air pollution) in areas downwind. The International Volcanic Health Hazard Network has detailed information about vog. Forecasts for the dispersion of vog can be found on the Vog Forecasting Dashboard. 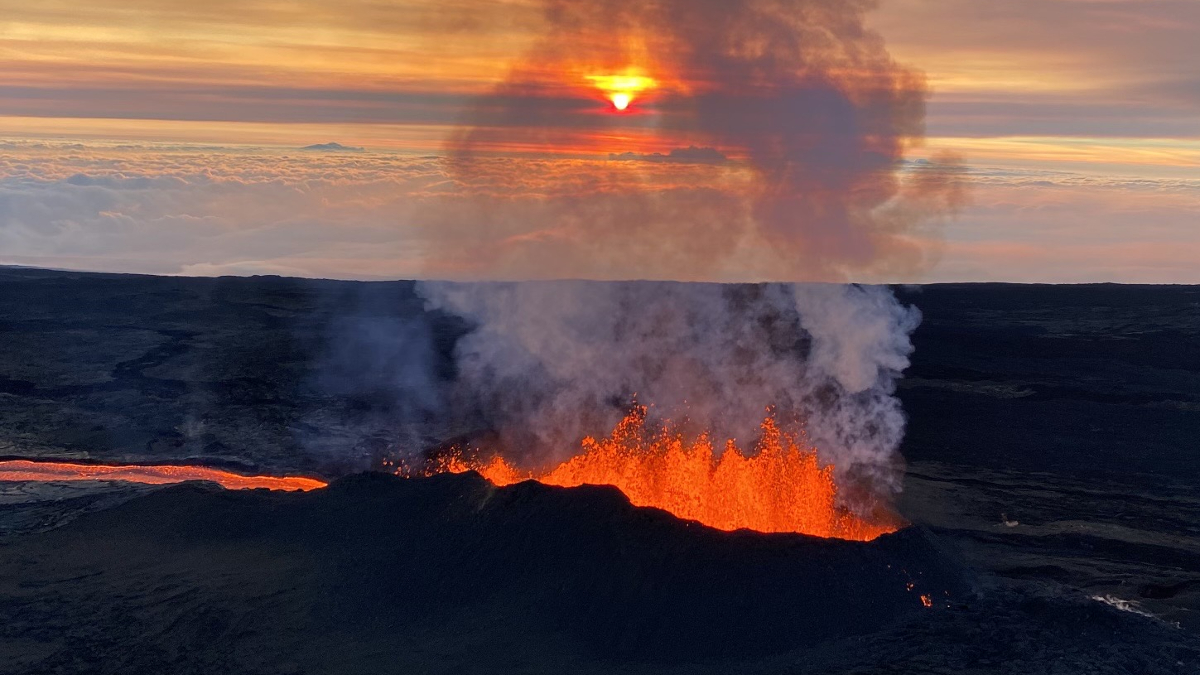 USGS: “Aerial view of fissure 3 erupting on the Northeast Rift Zone of Mauna Loa the morning of December 4, 2022.” (USGS image by L. DeSmither)

Fissure 3 is generating a lava flow traveling to the north toward the Daniel K. Inouye Highway (Saddle Road) that has reached flatter ground and slowed down significantly over the past several days, as expected. As of 7 a.m. today, December 4, the flow front was about 2.3 mi (3.6 km) from the Daniel K. Inouye Highway (Saddle Road). During the past 24 hours, the lava flow advanced at an average rate of about 40 feet per hour (12 meters per hour). Though the advance rate has slowed over the past several days, the lava flow remains active with a continuous supply from the fissure 3 vent. 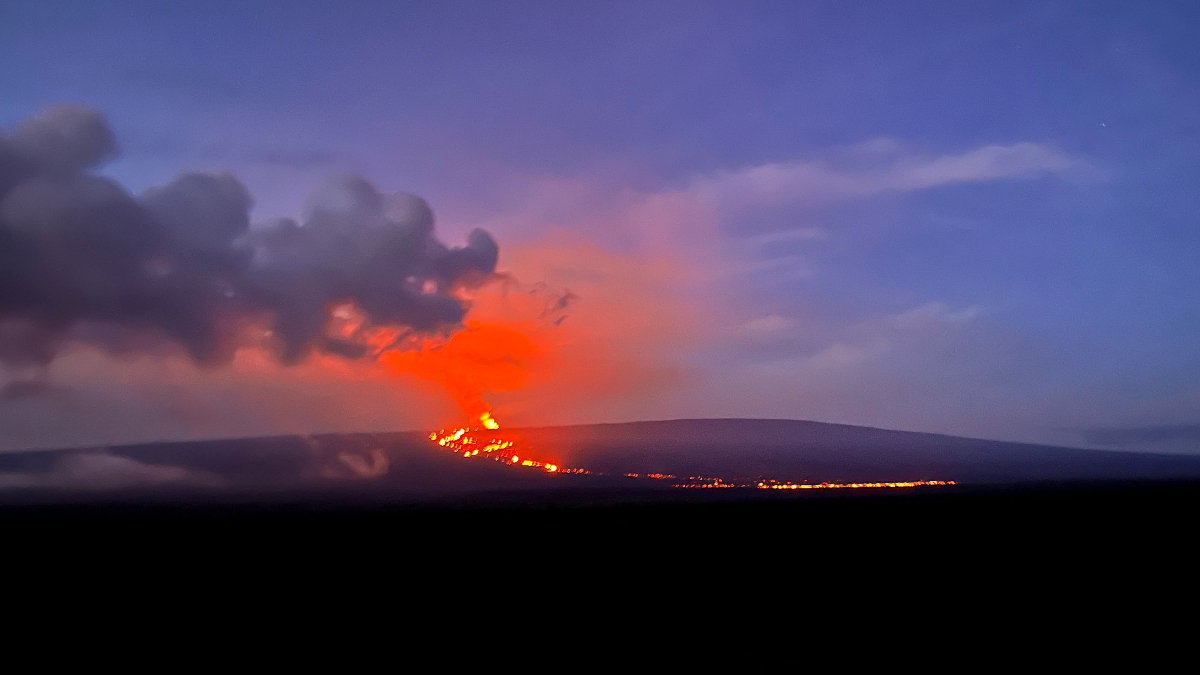 USGS: “The ongoing Northeast Rift Zone eruption of Mauna Loa, as viewed from the Daniel K. Inouye Highway (Saddle Road) shortly after 6 a.m. HST on December 4, 2022. The eruption continues, with a flow front that is slowly advancing towards the highway.” (USGS image by N. Deligne)