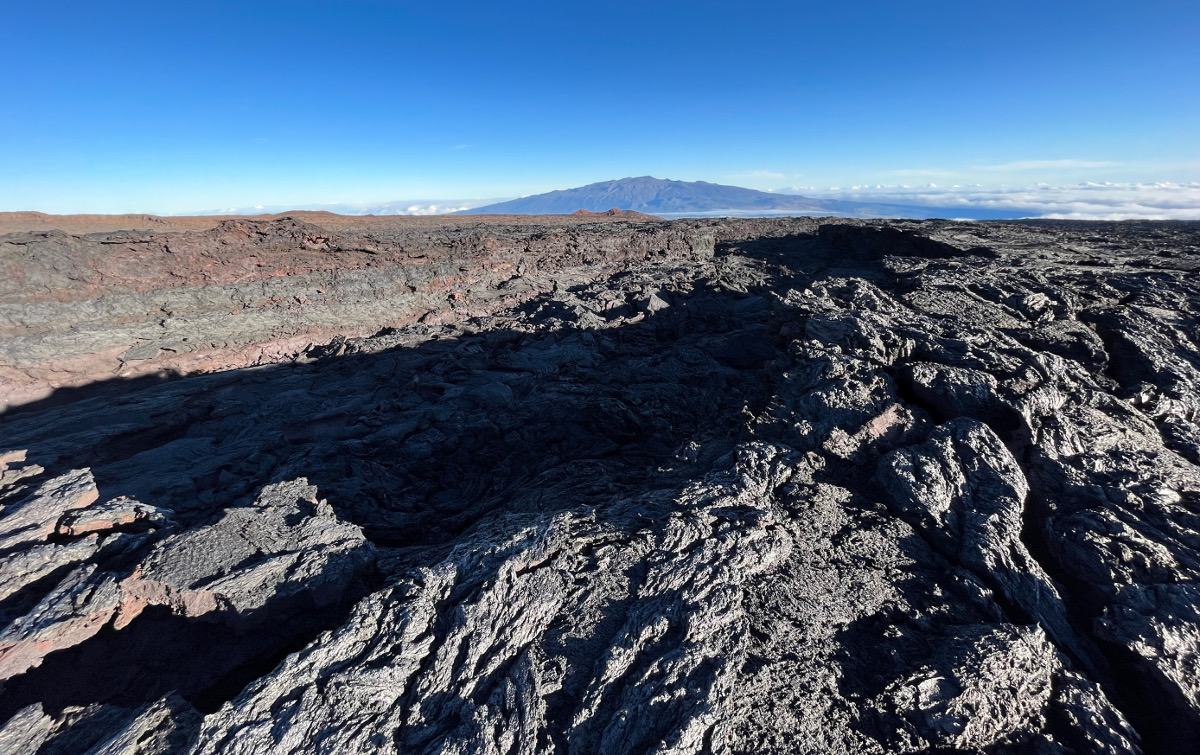 USGS: "Just days, ago, lava was full in the channels from the fissure 3 eruption on Mauna Loa's Northeast Rift Zone. Over the past two days, the eruption output has greatly reduced. A pond of lava in the fissure 3 cone feeds short lava flows that extended only 1.6 mi (2.6 km) from the vent. The channels below this point appear drained of lava and no longer feed the main flow front." (USGS image by K. Mulliken)

HAWAIʻI ISLAND - The eruption at the summit of Kilauea has paused, and aside from incandescence at the fissure 3 vent, there is no active lava visible on Mauna Loa. 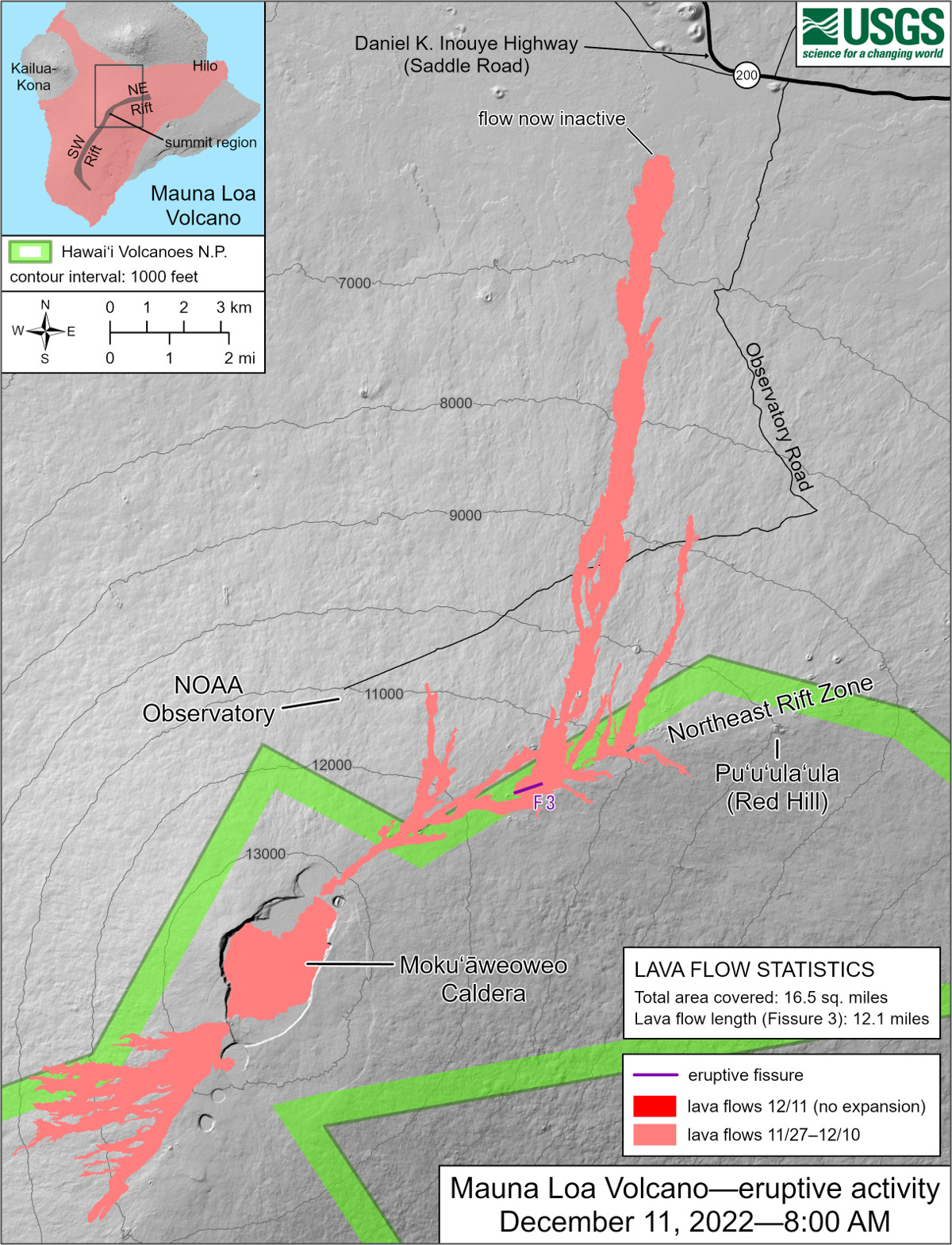 USGS: “The Northeast Rift Zone eruption of Mauna Loa that began the evening of November 27, 2022, continues at greatly reduced levels as of December 11, 2022 (fourteenth full day). Only incandescence was observed within fissure 3 overnight. The channels below the vent appear drained of lava and no longer feed the main flow front. For this reason, the total area covered by lava is unchanged since yesterday.”

(BIVN) – The eruptions of the two most active volcanoes on Hawaiʻi island appear to be simultaneously winding down.

The USGS Hawaiian Volcano Observatory on Sunday reported that the Northeast Rift Zone eruption of Mauna Loa may still be active, but aside from the incandescence visible in Fissure 3, there is no lava movement in the vent or anywhere on the flow field.

The Northeast Rift Zone eruption of Mauna Loa may still be active. Incandescence is restricted to the cone that formed around the fissure 3 vent, there was no observable activity anywhere on the rest of the flow field overnight.

As of 7:00 a.m. today, December 11, the M8 webcam shows very little incandescence and no lava movement in the F3 vent. The channels below the vent appear drained of lava and no longer feed the main flow front.

Sulfur dioxide (SO2) emission rates continue to be reduced; on December 9, the emission rate was approximately 20,000 tonnes per day (t/d). The Hawaii Interagency Vog Information Dashboard has detailed information about vog. Forecasts for the dispersion of vog can be found on the VMAP Vog Forecast Dashboard.

Tremor (a signal associated with subsurface fluid movement) is no longer detectable; summit and Northeast Rift Zone inflation started on December 7 and is continuing.

The significance of the continuing inflation while the flow field is inactive is not yet clear; it is common for eruptions to wax and wane or pause completely, but none of the eight recorded eruptions from Mauna Loa’s Northeast Rift Zone returned to high eruption rates after those rates decreased significantly. Nevertheless, the Hawaiian Volcano Observatory continues to closely monitor the current activity.

There is no active lava within Moku’āweoweo caldera nor in either rift zone. Satellite imagery shows the entire 2022 flow field cooling and no longer active.

At the same time, the year-long summit eruption of Kīlauea has paused. All recent eruptive activity in Halemaʻumaʻu crater has ceased. 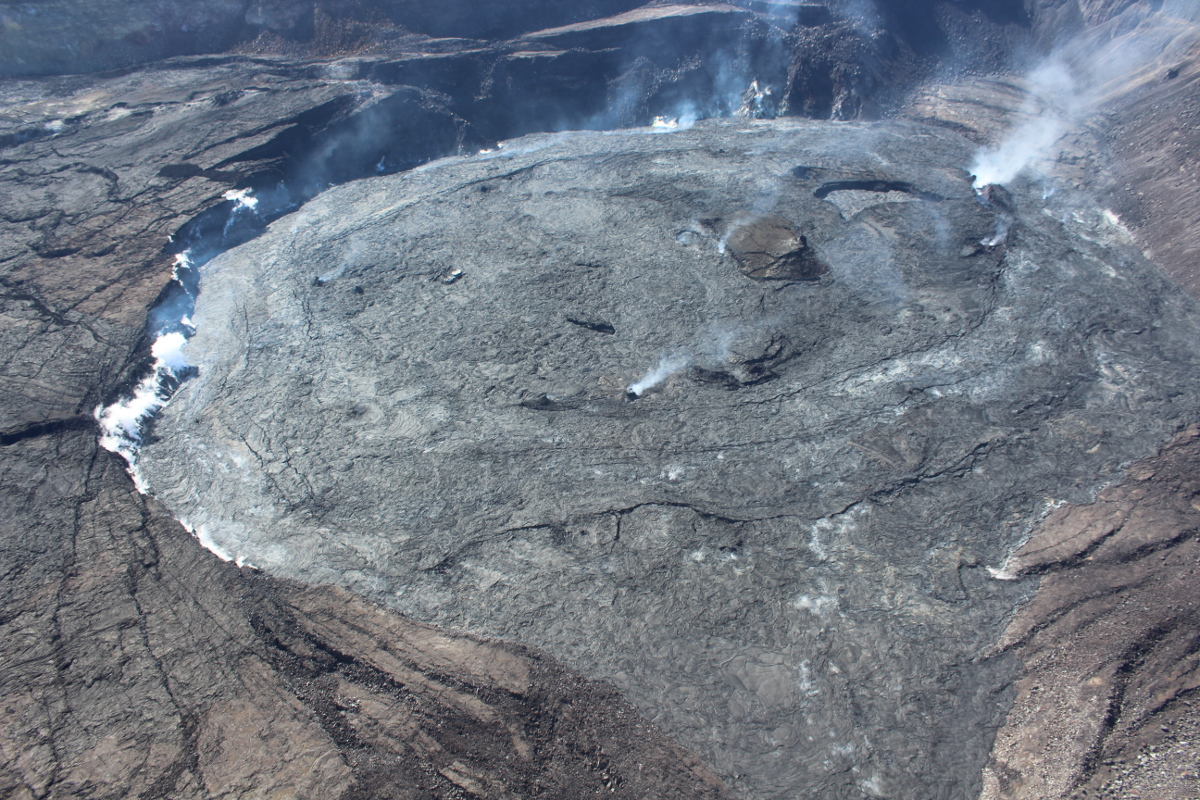 USGS: “Geologists conducted a monitoring overflight of Kīlauea summit on the morning of December 10, 2022. They noted that the lava lake within Halemaʻumaʻu crater was mostly solidified, though incandescence was visible.” (USGS image by J. Bard)

From the USGS report on Kilauea issued on Sunday:

Activity Summary: The summit eruption of Kīlauea Volcano, within Halemaʻumaʻu crater, has paused. All recent eruptive activity in the crater has ceased. No other significant changes have been observed at the summit or in either rift zone.

Halemaʻumaʻu Lava Lake Observations: Lava is no longer erupting from the western vent into the lava lake on the floor of Halemaʻumaʻu crater. Over the last 24 hours, the lava lake has remained completely crusted over and no incandescence was visible. Time lapse camera images show that floor of Halemaʻumaʻu crater over the past week show weak deflation and no inflation. Measure last on October 28, 2022, the total cumulative rise of the crater floor has been about 143 meters (469 feet), and that 111 million cubic meters (29.2 billion gallons) of lava had been effused since the beginning of this eruption on September 29, 2021.

Summit Observations: Tilt records have been stable within long term tends over the past week. Volcanic tremor is weak to nonexistent. A sulfur dioxide (SO2) emission rate of approximately 316 tonnes per day (t/d) were measured on November 23, 2022. More recent attempts to measure SO2 have been unsuccessful because rates remain very low.