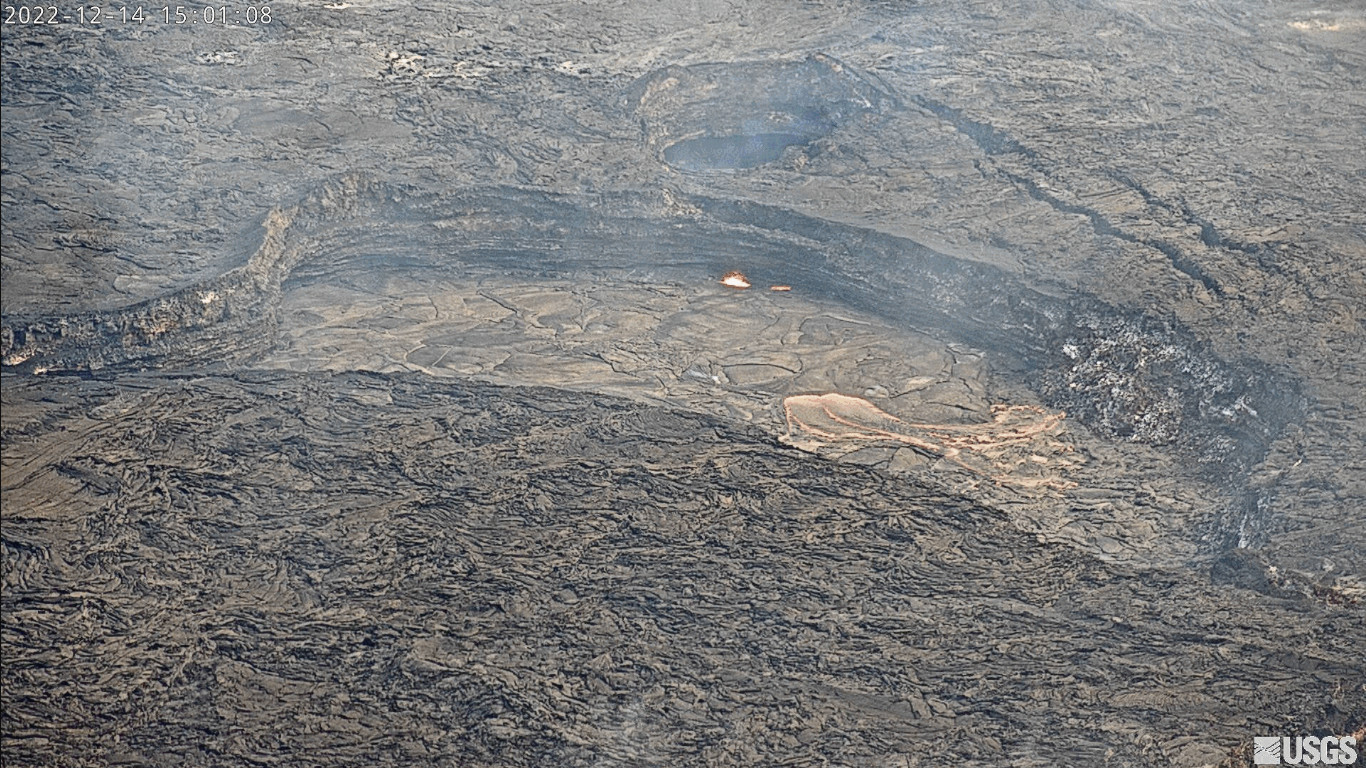 USGS webcam view of the west vent in Halemaʻumaʻu and the lava lake, from the northwest rim of the caldera. Image shows a flash of hot lava in the lake.

HAWAIʻI VOLCANOES NATONAL PARK - Scientists say a "passive overturn" of the Halemaʻumaʻu lava lake began just before noon on Wednesday and continued until about 4 p.m. HST.

(BIVN) – Eruptive activity has not resumed at the summit of Kīlauea, scienstists say, even though new lava was observed Wednesday at the previosuly crusted-over lava lake in Halemaʻumaʻu.

The Volcano Alert Level for Kilauea remains at ADVISORY and the Aviation Color Code remains at YELLOW.

The USGS Hawaiian Volcano Observatory offered this explanation on Wednesday in a 5 p.m. status report:

A passive overturn of the Halemaʻumaʻu lava lake began just before noon and continued until about 4 p.m. HST today, December 14, exposing new lava at the surface of the lake. There has been no resumption of seismic tremor (indicative of fluid movement), strong degassing, or supply of lava from the west vent that would be associated with re-activation of the eruption. Seismicity and deformation patterns remain low but unsettled. Potential remains for resumption of this eruption or initiation of a new eruption at or near the summit of Kīlauea.

The lava lake within Halemaʻumaʻu crater began crusting over between December 6th and 9th and the crust was likely less than 3 feet thick. Small pods of lava appeared on the crust in the northeast corner of the formerly active lava lake just before noon today, December 14. The weight of the small lava flows on top of the crust caused the immediate area to founder and overturn exposing the underlying lava within Halemaʻumaʻu crater. Following each overturn, another small flow progressed onto the adjacent crust, causing another 5-10% of the adjacent lake crust to founder and sink. The process repeated itself over the next several hours and by 4 p.m. HST today the entire surface of the small lava lake was resurfaced with new crust. This process is driven by hotter, boyount lava rising below the lakeʻs surface and weighing down the surface crust causing it to sink. Passive overturns are not uncommon in cooling lava lakes and this activity may be repeated during the next several weeks.

Levels of volcanic gas (sulfur dioxide and carbon dioxide) can remain locally hazardous even though Kīlauea is no longer erupting. Sulfur dioxide (SO2) gas emissions have greatly decreased; however, local concentrations of sulfur dioxide (SO2) or hydrogen sulfide (H2S) may persist in downwind areas, and residents may notice odors of these gases occasionally. Significant hazards also remain around Halemaʻumaʻu from crater wall instability, ground cracking, and rockfalls that can be enhanced by earthquakes within the area closed to the public.