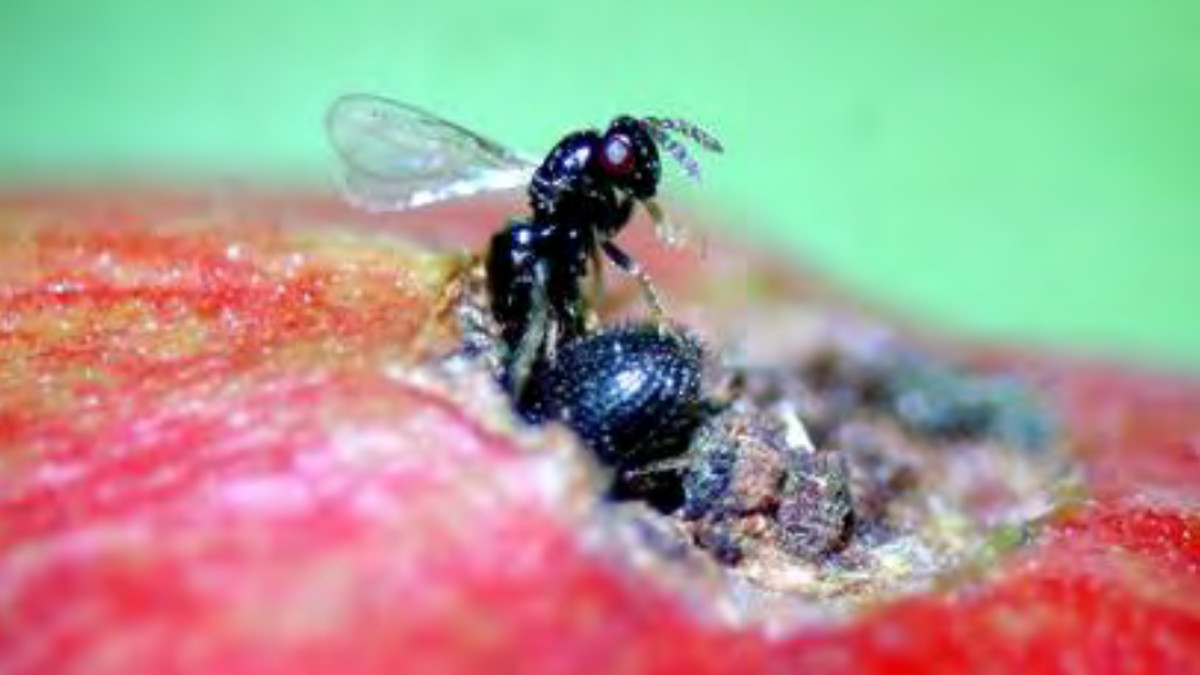 "Phymastichus coffea parasitizing CBB in berry." (Photo courtesy of Cenicafé, Figure 3 in the Draft Environmental Assessment and Anticipated Finding of No Significant Impact for the Proposed Statewide Release of Phymastichus coffea)

HAWAIʻI - A draft Environmental Assessment has been published for the proposed field release of a parasitoid wasp, Phymastichus coffea, for the biological control of the invasive coffee berry borer in Hawaiʻi.

(BIVN) – State officials are proposing to release a parasitoid wasp from Kenya for biological control of the invasive coffee berry borer, or CBB, the destructive pest that has been plagueing Hawaiʻi coffee farms for years.

A Draft Environmental Assessment and Anticipated Finding of No Significant Impact for the statewide release of the wasp, Phymastichus coffea, has been published in The Environmental Notice.

The wasp release is being proposed by the College of Tropical Agriculture and Human Resources (CTAHR) of the University of Hawai‘i at Mānoa, in collaboration with the US Department of Agriculture Agricultural Research Service.

According to the notice, “Phymastichus coffea is a small parasitic wasp whose larvae feed on adult coffee berry borer in the native range in Africa, causing beetle death before it can penetrate the coffee berry and lay eggs. High levels of parasitism of coffee berry borer by P. coffea is expected in Hawaiʻi, with anticipated suppression of the pest resulting.”

CTAHR noted that extensive testing in quarantine studies has shown that P. coffea is host specific to the invasive CBB (Hypothenemus species) and “does not attack any native beetles in the same family as the target pest.”

CBB was first detected on Hawaiʻi island in 2010, and has since spread to infest coffee farms on the islands of Oʻahu, Maui and Kaui. “CBB has had the effect of making coffee farming more intensive and less profitable,” the draft EA states. “Damage causes significant losses in yield and alters the flavor profile of salvageable coffee beans. If left unmanaged, CBB can damage ˃90% of the crop.”

Coffee farmers have been using the microbial insecticide Beauveria bassiana to combat the CBB pest.