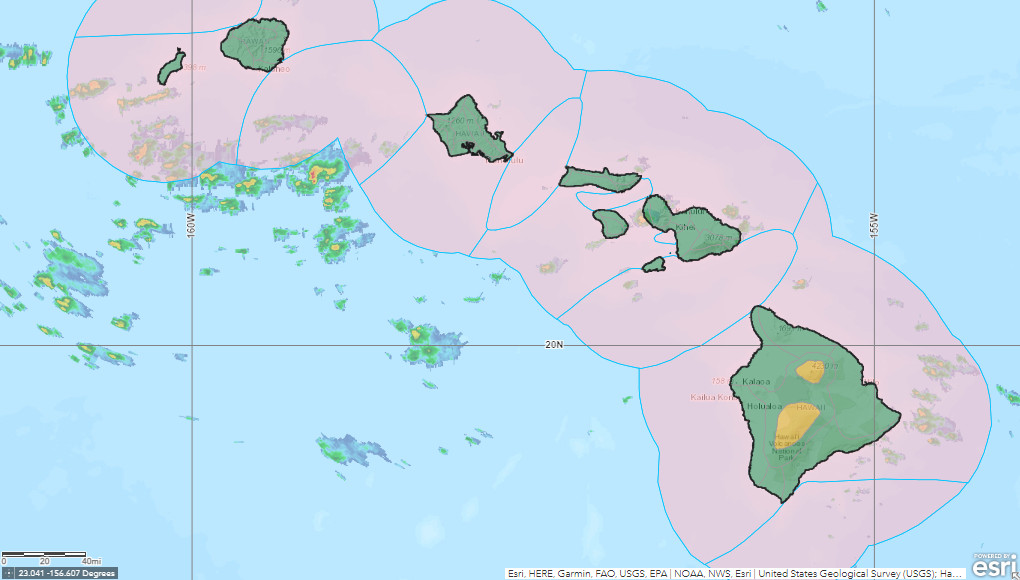 image from the Hawai‘i Emergency Management Agency "Know Your Hazards" map at 10 p.m. on Saturday evening

HONOLULU - A Flod Watch has been issued for the entire island of Hawaiʻi, while a High Wind Warning and Winter Storm Watch will be in place for the summits.

(BIVN) – A number of alerts have been issued by the National Weather Service ahead of a kona low storm that is expected to arrive to Hawaiʻi on Sunday.

A Flash Flood Watch has been issued for the entire island of Hawaiʻi, and will be in effect as of Sunday morning through late Monday night.

A High Wind Watch has also been issued, as very strong winds are expected to affect the state, “with the strongest winds occurring over and downwind of the terrain in the areas typically referred to as windward locations,” forecasters said.

For the summits of Maunakea and Mauna Loa, a High Wind Warning will be in effect, with “southwest to west winds 45 to 55 mph, increasing to 70 to 100 mph Sunday night through Tuesday.” Also, a Winter Storm Watch has been issue, as heavy snow will be possible for the summits above 12,500 feet. Total snow accumulations of greater than 6 inches will be possible.

The Hawai‘i Emergency Management Agency issued this news release ahead of the storm on Saturday:

The National Weather Service on Friday issued a special weather statement about the incoming “kona low” storm system expected to bring substantial hazards to the State. It described a “powerful low pressure system” that is expected to push across Hawai‘I on Monday, driving strong winds from the southwest, or kona, ahead of it.

“These strengthening winds may become damaging Sunday night and Monday. Impacts could include roof damage, downed trees, and power outages,” NWS reported. The incoming system also could generate thunderstorms with hail or locally heavy downpours, and snow, sleet or freezing rain is possible on the high mountain summits.

“A kona low system can bring strong gusty southerly winds across many areas that don’t usually experience them, and can easily damage roofs or send loose branches or other items flying,” said Luke Meyers, administrator of HI-EMA.

A kona low system that struck the state in December 2021 caused millions of dollars in damage, including landslides on O’ahu and extensive flooding on Maui, and it may have contributed to a landslide that closed a road on Kaua‘i. “With the holidays coming up, we encourage residents and visitors alike to plan any activities Sunday so they can be in a safe location by the time the storm’s effects start pushing ashore,” Meyers said.

While the storm appears relatively fast-moving and isn’t expected to cause widespread flooding, the locally heavy rain could cause localized flooding, road washouts or landslides, he noted. Residents should take steps to make sure loose items are stowed and branches that could damage property are trimmed before the high winds begin Sunday evening, and that nearby drainage culverts haven’t become clogged.

The weather system also is expected to push high swells onto north and west-facing shores from Sunday night through Tuesday, with waves affecting swimmers, boaters, and shoreline property. The swells could flood roads and coastal properties. HI-EMA will partially activate the State Emergency Operations Center on Sunday to monitor conditions as they evolve and to provide support to the counties and other partners if needed.

“We recommend that everyone in Hawai‘i take steps to prepare for the incoming system in case the impacts are significant, and at a minimum monitor reports as it gets closer to the State,” Meyers said.

Sources of reliable information include NOAA Weather radio and the emergency alert notification networks for each of Hawaii’s counties. Links to sign up for County alerts are available on the HI-EMA website at this link.