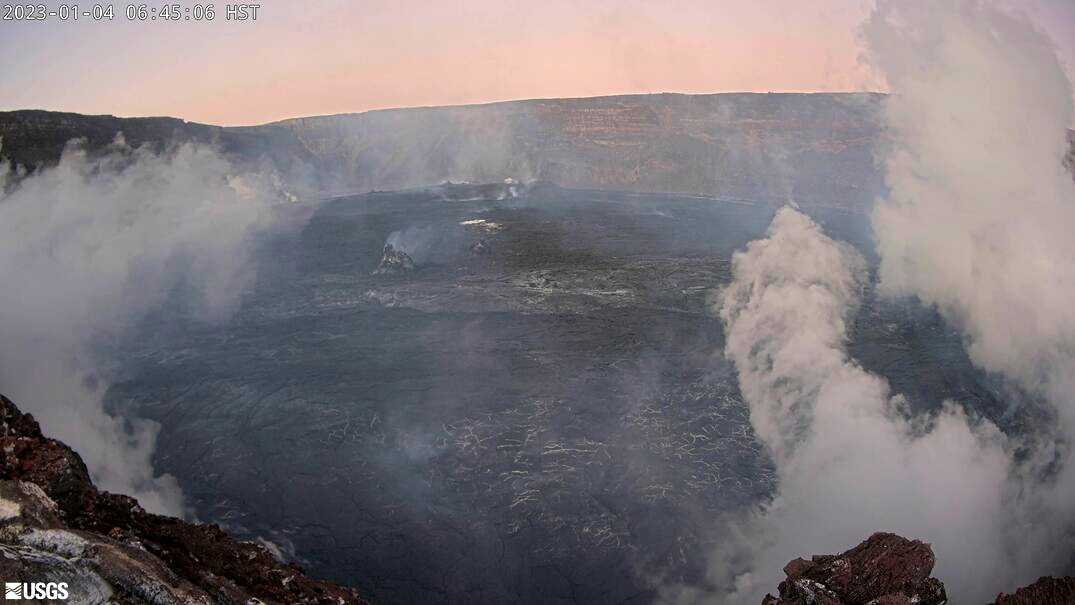 HAWAIʻI ISLAND - Periods of heightened seismicity beneath the summit area has been observed, however volcanic tremor "remains weak to nonexistent."

(BIVN) – Kīlauea volcano is not erupting. In the latest weekly update posted by the USGS Hawaiian Volcano Observatory, scientists say they have seen variable seismic activity beneath the summit area in recent days, including two earthquake swarms.

From the USGS on Tuesday, January 3rd:

Summit Observations: This past week saw variable seismic activity in the Kīlauea summit region. There have been occasional periods of heightened seismicity beneath and surrounding Halemaʻumaʻu crater, including a small earthquake swarm in the evening of December 30, 2022. Another small swarm began late yesterday evening, January 2, 2023, and has continued into this morning. A M4.0 earthquake north of the summit region at 3:31 a.m. this morning did not have any obvious effect on volcanic unrest. Volcanic tremor remains weak to nonexistent.

Summit tiltmeters tracked several multi-day deflation-inflation (DI) events over the past week, which have decreased in magnitude compared to earlier DI events. Over longer timescales, summit tiltmeters and GPS continue to show long-term inflationary trends. Gas emissions from the summit remain low; a sulfur dioxide (SO2) emission rate of approximately 150 tonnes per day (t/d) was measured on December 28, 2022.

Halemaʻumaʻu Lava Lake Observations: Lava is no longer erupting from the western vent into the lava lake on Halemaʻumaʻu crater floor. The lava lake surface has cooled to form a dark crust. There has been no crustal overturn, and only one small source of incandescense—in the center of the crater floor—remains weakly visible in nighttime webcam views. Measured last on December 29, 2022, the total cumulative rise of the crater floor has been about 144 meters (472 feet), and 112 million cubic meters (29.5 billion gallons) of lava had been effused since the beginning of the latest eruption on September 29, 2021.

East Rift Zone Observations: No unusual activity has been noted along the East Rift Zone or Southwest Rift Zone; steady rates of ground deformation and seismicity continue along both. Measurements from continuous gas monitoring stations downwind of Puʻuʻōʻō in the middle East Rift Zone remain below detection limits for SO2, indicating that SO2 emissions from Puʻuʻōʻō are negligible.