HVO scientists conducted ground observations of the June 27th lava flow throughout the day on Sunday, October 26, 2014. The relatively narrow finger of lava that crossed Apaʻa Street yesterday morning continued to travel downslope, splitting into two lobes as it advanced. The faster, northern lobe crossed completely through the Pāhoa cemetery by mid-morning, while the slower southern lobe was advancing through open pasture south of the cemetery. Another lobe farther upslope, just above Apaʻa Street, advanced about 50 meters (55 yards) since yesterday.

Over the course of the day, the advance rate of the narrow finger that crossed the cemetery varied from about 10 and 15 meters per hour (11 to 16 yards per hour), which is equivalent to 240–360 meters per day (260–390 yards per day). As of 5 PM, the faster-moving finger was about 390 meters (425 yards) downslope of Apaʻa Street and 660 meters (720 yards) upslope from Pāhoa Village Road. It had an average width of about 40 m (45 yd). The slightly slower-moving southern lobe in the pasture south of the cemetery reached slightly steeper terrain at mid-afternoon today, and was traveling at about 9 meters per hour (10 yards per hour) at 5 PM. It will likely rejoin with the finger that came through the cemetery near the northeast end of the pasture.

The pasture is located between two of the steepest decent paths plotted on HVO’s lava flow maps, and the flow is trending toward the southerly of these two paths. This path joins the northerly steepest-descent path about mid-way between the cemetery and Pāhoa Village Road, so the inferred flow path leading to Pāhoa Village Road is unchanged.USGS Hawaiian Volcano Observatory on Oct. 26 at 5:56 p.m. HST 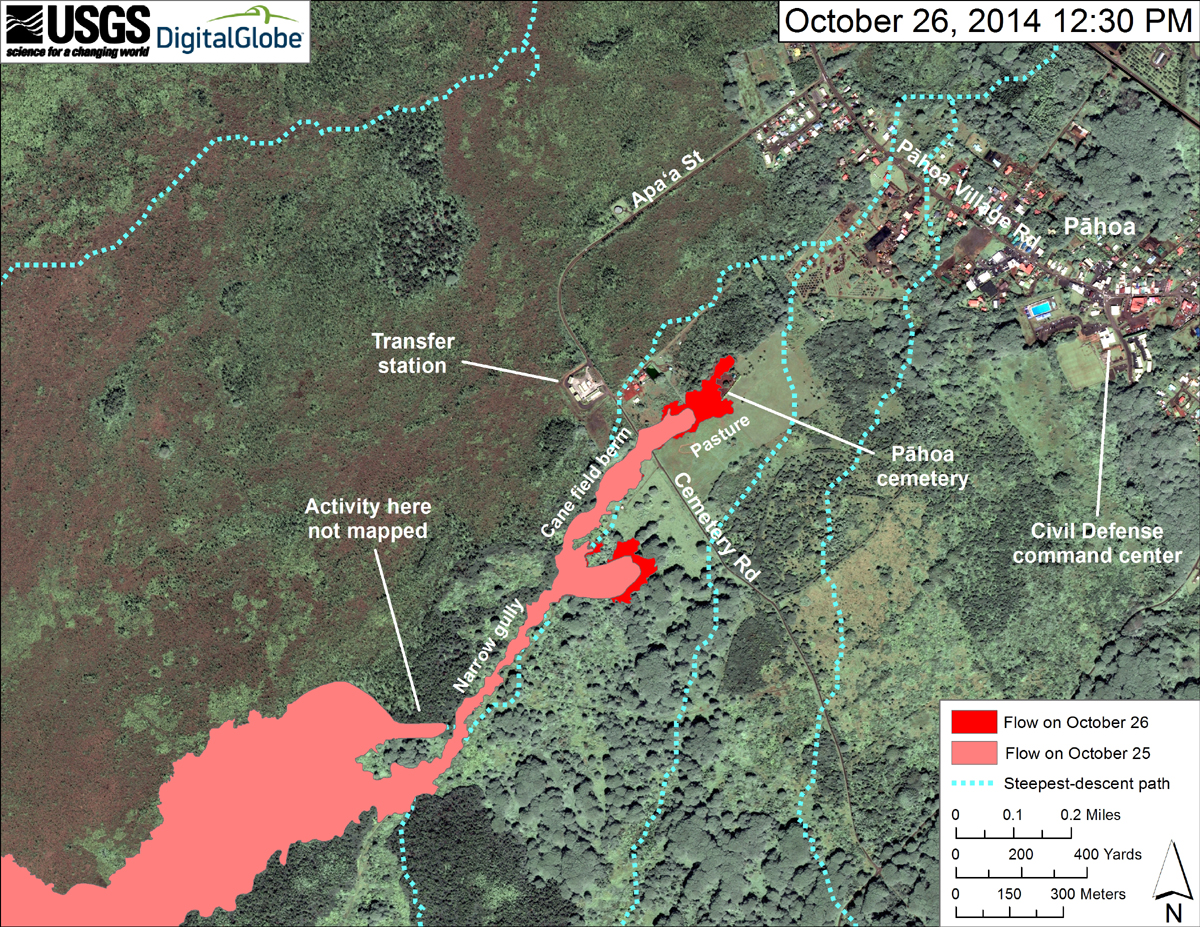 USGS HVO: This map uses a satellite image acquired in March 2014 (provided by Digital Globe) as a base to show the area around the front of the June 27th lava flow. The area of the flow on October 25, 2014, at 5:00 PM is shown in pink, while widening and advancement of the flow as mapped on October 26 at 12:30 PM is shown in red. The dotted blue lines show steepest-descent paths in the area, calculated from a 1983 digital elevation model (DEM).
The flow advanced about 190 meters (210 yards) during the preceding 19.5 hours, traveling completely through the cemetery above Pāhoa. At the time of mapping, the flow was 715 meters (780 yards) directly upslope from Pāhoa Village Road. The flow was advancing downslope between two intersecting steepest-descent paths and was trending toward the southern one. The flow will likely return to the original steepest-descent path about 300 m (330 yd) upslope from Pāhoa Village Road, if it continues. 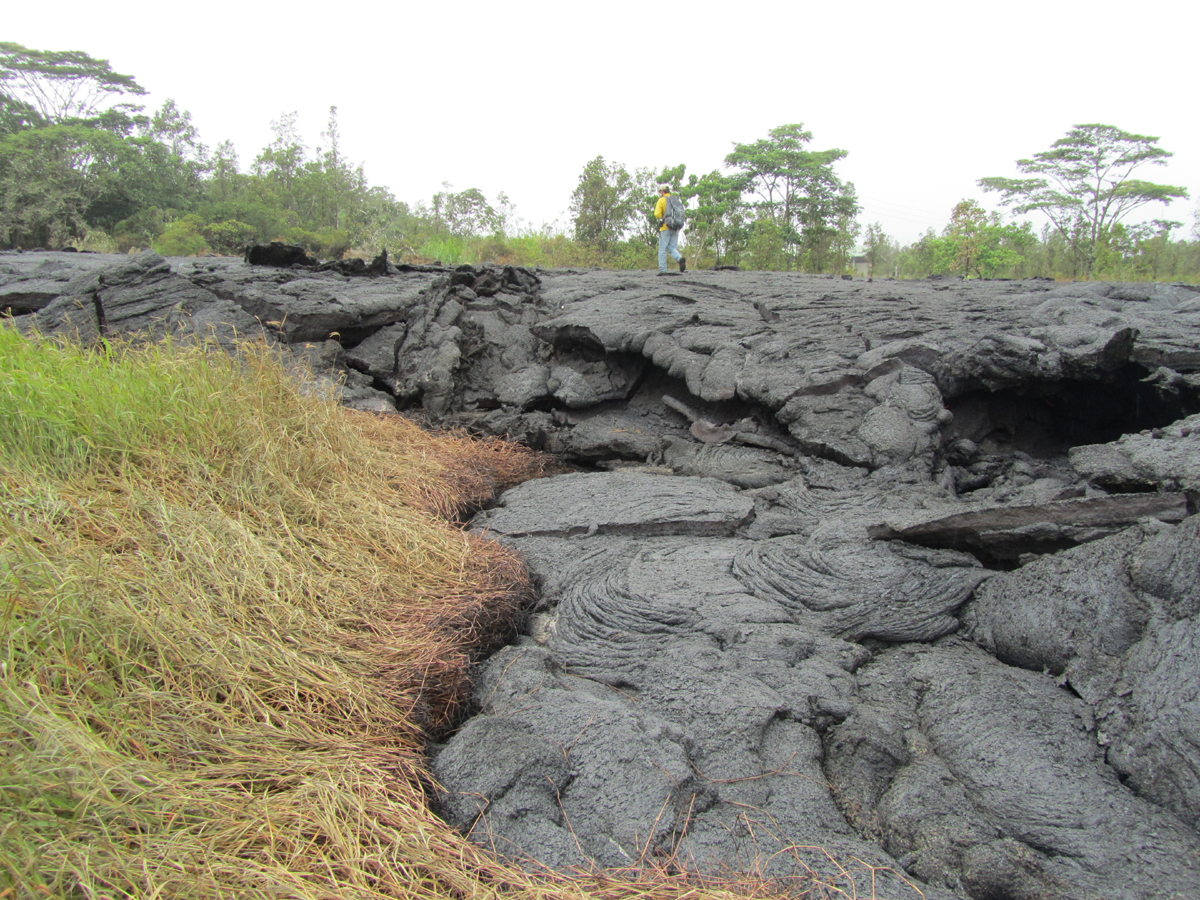 An HVO geologist walks across the surface of the flow, which covers the short access road to the cemetery. As is typical for pāhoehoe, the flow has inflated over the past day was chest high in many places. (USGS HVO)

The flow continues to remain active and has advanced approximately 95 yards since 6:30 this morning. The flow front is currently through the cemetery grounds and advancing at approximately 10 yards per hour in a northeast direction. Smoke conditions were light to moderate with moderate trade winds from the northeast pushing the smoke in a south southwest direction. Smoke conditions may increase in some areas and residents down wind that may be sensitive or have respiratory problems are advised to take necessary precautions and to remain indoors.

Based on the current flow location, direction and advancement, residents in the flow path will be placed on an evacuation notice.

Apa’a Street and Cemetery Road will remain closed and limited to area residents only. In addition, Civil Defense and public safety personnel will be operating in the area round the clock to maintain close observations of flow activity.

We would like to thank everyone for your patience and understanding and your cooperation and assistacne is greatly appreciated.Hawaii County Civil Defense on Oct. 26 at 3 p.m. HST