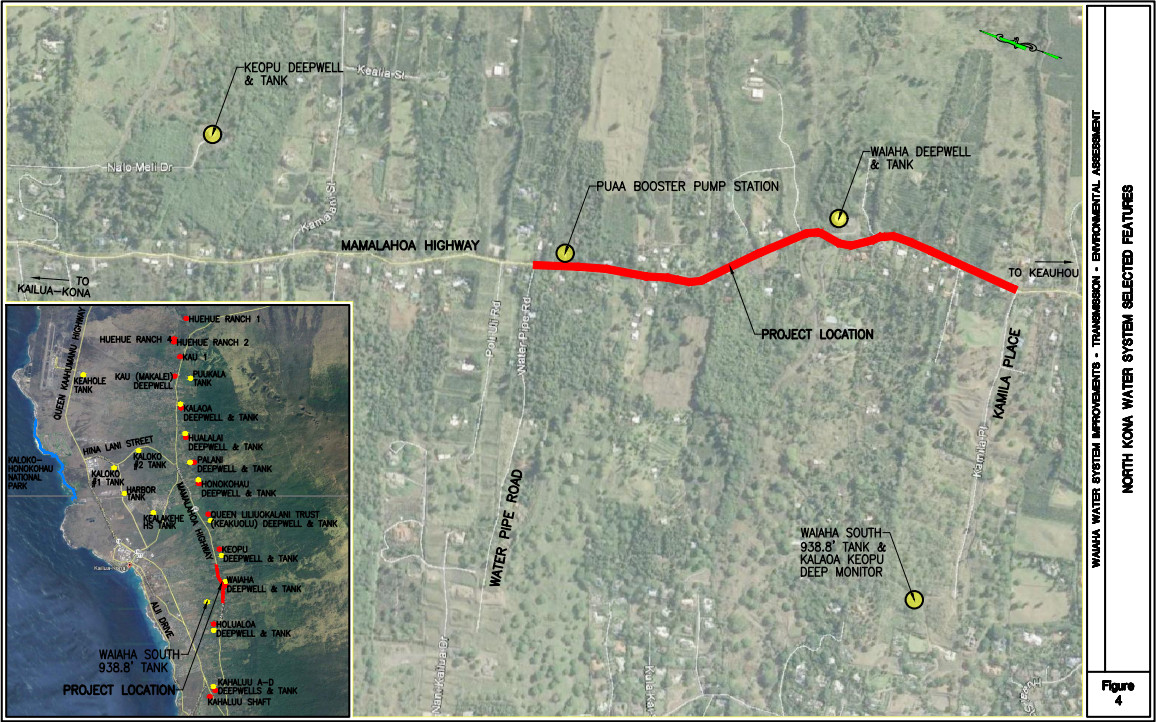 NORTH KONA, Hawaii - The 16-inch transmission water line will provide "critical redundancy in case there are problems with another part of the system", water officials say. 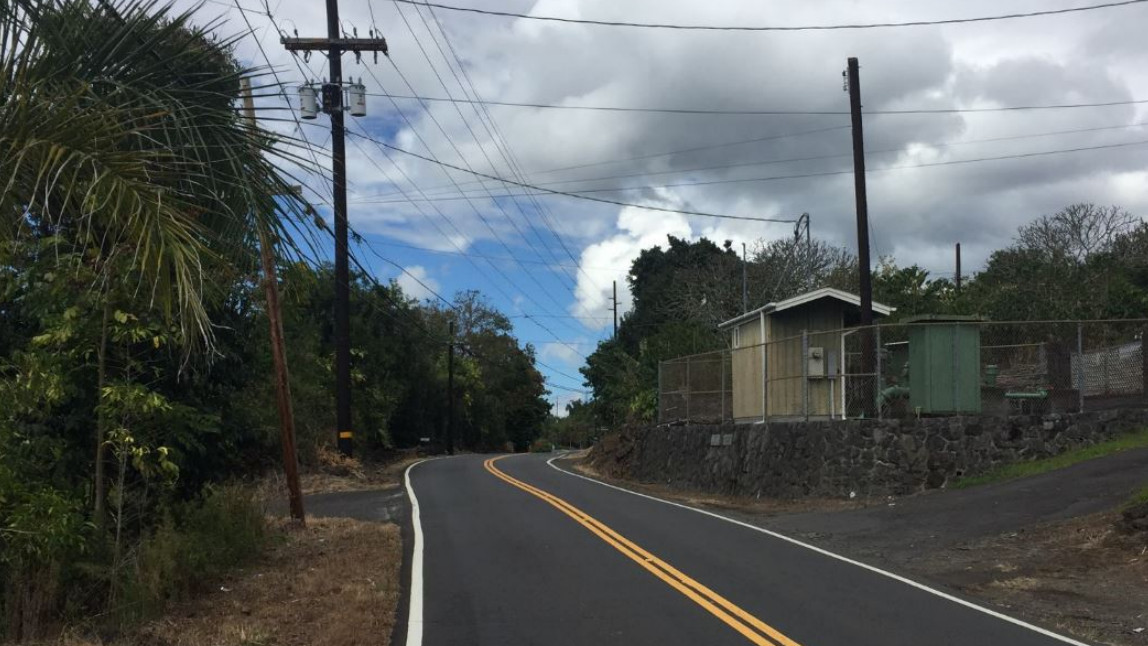 (BIVN) – The Final Environmental Assessment for the planned Waiaha Transmission Waterline has been published to the Office of Environmental Quality Control website.

The Department of Water Supply project on the Mamaloha Highway in North Kona includes a Finding of No Significant Impact.

From the document’s summary:

The County of Hawai‘i, Department of Water Supply (DWS) proposes to construct a 16-inch water transmission line and associated infrastructure for a length of approximately one mile between Kamila Place and Waterpipe Road along Māmalahoa Highway in Kona. The project corridor extends between Palani Junction and the community of Holualoa, at elevations ranging from 1,480 to 1,500 feet above sea level, approximately 2.5 miles inland from the Kailua Bay. The intermittent Wai‘aha Stream crosses the project corridor, as do three small, unnamed intermittent drainages.

Most work will be conducted within the right-of-way of Māmalahoa Highway, with connections to the Waiaha 2-MG Reservoir and the Puaa Booster Pump Station, and possible minor use of four private properties where portions of culverts are just outside the right-of-way.

The new water line will be installed primarily within an excavated trench with a minimum 3-foot backfill cover. Where culverts are crossed, the water line will be independently supported by a new concrete structure that will be parallel to the existing culvert headwall, except at one location where the water line will be placed under the culvert. The inlet flow channel side walls will be “notched” to accommodate the water line and support beam. The three pumps at the Puaa Pump Station will also be upsized to 350 gpm, with the ability to be controlled with variable frequency drives to allow flexibility in controlling water flow going north. A new enclosure may be built to house the electrical equipment.

The proposed work has the potential to produce localized and temporary traffic congestion as well as construction noise, emissions and fugitive dust, which could temporarily affect nearby properties. Construction will occur in front of individual properties during periods varying between several days and several weeks. This will take place over the course of about 16 months, as work moves progressively from one end of the water line installation to the other. Construction work will be confined to daytime hours from 7:30 am to 3:30 pm.

The contractor will obtain a National Pollutant Discharge Elimination System permit with Best Management Practices that will minimize the potential impact of sediment, storm water runoff and construction materials on receiving waters. The project corridor has long been disturbed through by paving, grading and vegetation control. An archaeological inventory survey documented nine historic sites, all from the Historic Era, each significant for information content only. There will be no effects to significant historic sites. Botanical surveys found mainly nonnatives and no rare, threatened or endangered plant species. Vegetation removal restrictions and, if appropriate, hawk nest surveys, will minimize impacts to endangered Hawaiian hoary bats and Hawaiian hawks. No cultural uses such as gathering occur within the paved roadway or shoulders of the project corridor, and the cultural resources and values of Kona will not be affected directly or indirectly. 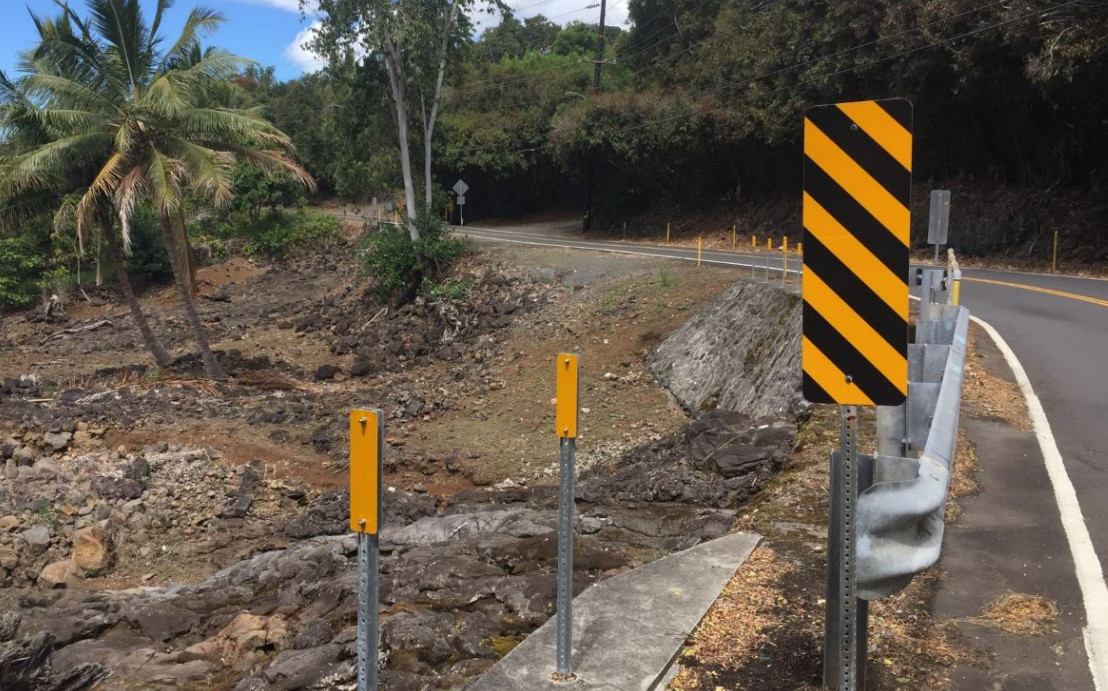 The 16-inch transmission water line will allow full use of the Waiaha Deepwell and the Waiaha 2 MG Reservoir, and provide “critical redundancy in case there are problems with another part of the system”.

The “purpose and need” for the project is futther outlined in the 184-page file:

The existing 8-inch water line that connects to the Waiaha Reservoir is too small to efficiently accomplish water transmission for present and future water demand in the North Kona Water System as envisioned in the HWUDP and the Water Master Plan. Specifically, DWS is forced to throttle flow into the 1.0-MG Waiaha South 938.8’ Reservoir to curb the water flow to the amount that can be accommodated in the 8-inch water line. This also restricts the utilization of the Waiaha Deepwell capacity. There is limited ability to have water flow in both directions in the Waiaha area along the Māmalahoa Highway, and this makes it difficult to shift to redundant sources in case of well pump breakdowns. Furthermore, the current arrangement limits the ability to incorporate future well sources that are expected to be developed in the desired area in the south.