HAWAII ISLAND - Hundreds of feet deep, videographer Mick Kalber saw no lava in the vent at all, 'just cinders and rubble." 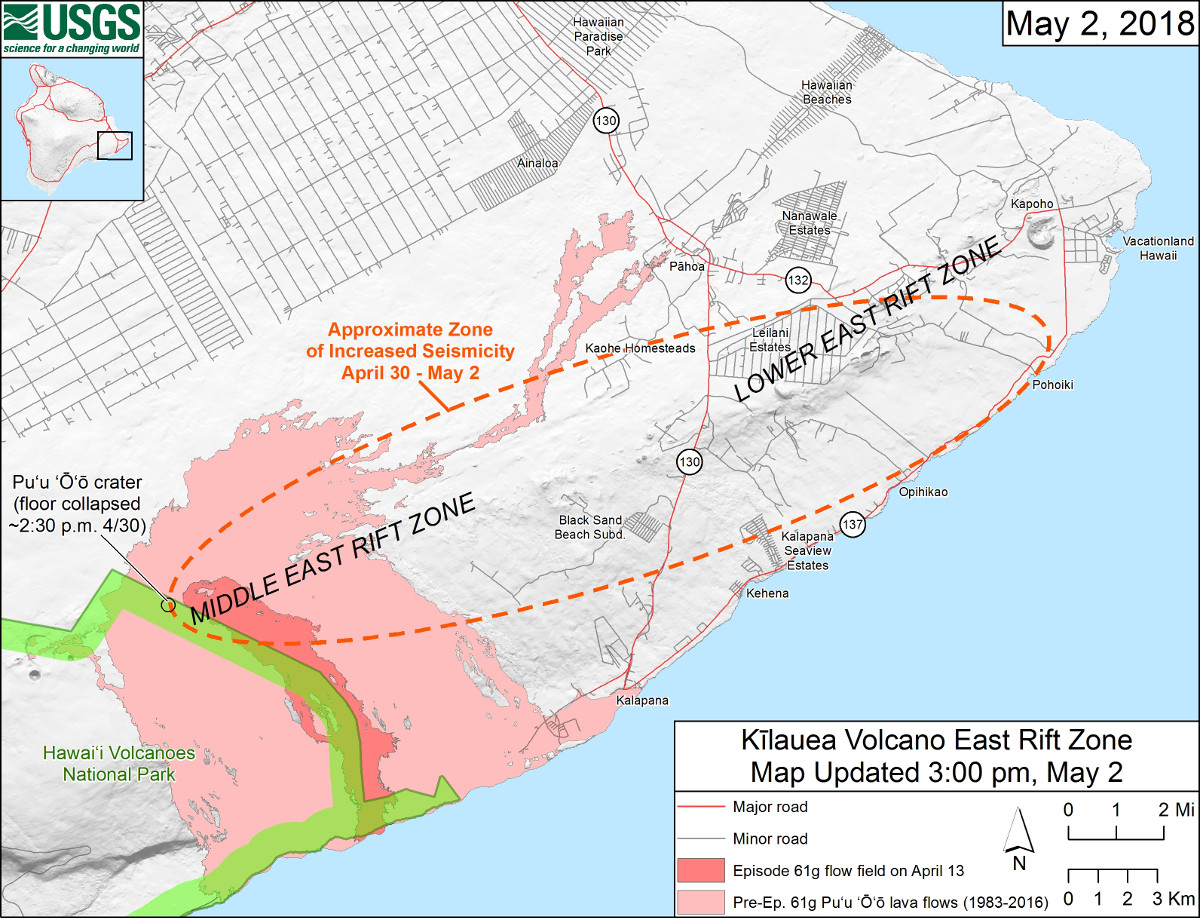 USGS MAP: Starting on the afternoon of Monday, April 30, 2018, magma beneath Pu‘u ‘Ō‘ō drained and triggered the collapse of the crater floor. Within hours, earthquakes began migrating east of Pu‘u ‘Ō‘ō, signaling an intrusion of magma along the middle and lower East Rift Zone. As of about noon on Wednesday, May 2, these earthquakes continue along the lower East Rift Zone, with many reports of earthquakes felt by residents in nearby subdivisions. The orange dashed line marks the approximate area within which most of the earthquakes are located based on automatic earthquake locations and analysis by seismologists. All earthquake locations are preliminary.

(BIVN) – Videographer Mick Kalber returned to the sky above Puʻu ʻŌʻō on Wednesday for another look at the changes to the active vent on East Rift Zone of Kīlauea Volcano. Flying aboard Paradise Helicopters for the second time in two days, Kalber was able to capture a different look at vent, which is now a gaping hole hundreds of feet deep.

“The complete collapse of the active vent on Kilauea’s east rift zone last Monday sent an amazing ash plume skyward,” Kalber wrote on Wednesday, “and blanketed a three mile long swath of the current eruption in red dust… 61G looks like Mars! Yesterday, in very inclement weather, we managed some shots of the ash plume roiling away… today, under stunningly beautiful skies, we were able to see inside the vent. Hundreds of feet deep, we saw no lava in the vent at all… just cinders and rubble.”

Elevated rates of seismicity and deformation at Kīlauea Volcano along a section of the lower East Rift Zone east of the Pu’u ‘Ō’ō vent are continuing this evening. This activity is associated with the continued intrusion of magma into the East Rift Zone to locations east of Highway 130. An outbreak of lava from the lower East Rift Zone remains a possible outcome of the continued unrest. At this time it is not possible to say with certainty if or where such an outbreak may occur, but the area downrift (east) of Pu’u ‘Ō’ō remains the most likely location.

Scientists of the Hawaiian Volcano Observatory will be on duty overnight to monitor the changing seismicity and deformation, and residents of the Puna District should remain alert and watch for further information about the status of the volcano; watch for Hawaii County Civil Defense messages at http://www.hawaiicounty.gov/active-alerts/.

Elevated earthquake activity in Kīlauea’s lower East Rift Zone has persisted through the day, with many reported felt events by residents. Earthquake counts have decreased slightly since midnight in the area east of Highway 130.

Beginning this morning a GPS station located about 1.5 km (1 mile) southwest of Nanawale Estates began moving toward the north, indicating the magma intrusion is approaching this area of the East Rift Zone. The station has moved several cm (inches) since this morning.

A tiltmeter at Pu’u ‘Ō’ō recorded steady, deflationary tilt during the day, with several sharp inflation offsets. These offsets probably recorded the continued episodic collapse of the crater floor. Some of these offsets corresponded to short-lived ashy plumes rising from the crater.

New small ground cracks less than a few cm (inches) wide developed today across a couple of roads in and adjacent to Leilani Estates; these cracks reflect the buildup of stress at the surface due to the magma intrusion. No steam or gases were observed escaping from the cracks.

Analysis of webcam images of the 61g lava flow field on May 1 indicates that surface flows within a few kilometers (miles) of Pu’u ‘Ō’ō have stopped advancing—the few areas of incandescence visible in the images did not move starting early morning on May 1. The 61g flow is likely no longer being supplied with lava from Pu’u ‘Ō’ō.

The migration of seismicity and deformation downrift (east) of Puʻu ʻŌʻō cone following Monday’s collapse indicates that a large area along the East Rift Zone is potentially at risk for a new outbreak.

The location of any future outbreak will determine what areas are in the path of new lava flows.