November 2, 2010 – Hilo, Hawaii Video by David Corrigan | Voice of Stephanie Salazar It’s election day in Hawaii, and that means Hilo was the place to be last night for Democratic candidates. For over 50 years, the Mo’oheau Bandstand has been the gathering place for Democrats on the night before election day. U.S. […]

It’s election day in Hawaii, and that means Hilo was the place to be last night for Democratic candidates.

For over 50 years, the Mo’oheau Bandstand has been the gathering place for Democrats on the night before election day. U.S. Sentaor Dan Inouye has been there for just about all of them. The Senator is seeking a ninth term in office this year.

Meanwhile, Democrats running for other offices were present at the rally. Candidates for Hawaii County council, state house, state senate, and lt. governor shared the podium, and pushed a similar message: reclaim the fifth floor in Honolulu.

Ku’uipo Kumukahi and Ben Kaili provided the music for the event, while taiko drummers greeted the candidates on thier arrival to the bandstand.

“This is it… the grand rally,” stated gubernatorial candidate Neil Abercrombie when he took over the microphone, to a muted reception compared to the riotous primary rally. If Abercrombie’s voice sounded a little apprehensive, it was with good cause. Statewide polls have shown Abercrombie and his Republican opponent, James “Duke” Aiona, are tied at this late stage in the race. And the democrats seem beset on all sides, even at thier traditional Hilo rally.

Just down the road from the Bandstand, Republican supporters waved signs and beeped horns as Lt. Governor candidate Lynn Finnegan made a last minute detour to the Big Island, joining with what her campaign called “grassroots supporters” along the bayfront highway.

According to Finnegan, the GOP candidates have been re-envigorated with a couple of key Hawaii Island endorsements. The Hawai‘i Tribune-Herald, Japanese Chamber of Commerce and Industry of Hawai‘i, and Hawai‘i Island Contractors’ Association have all endorsed Aiona and Finnegann in the upcoming election. Those endorsements did not sit well with many Democrats speaking at the rally Monday night. Democratic candidates took shots at the paper for their GOP support in certain races.

In an attempt to counter the republican platform against government deficit spending, Abercrombie targetted the shortfalls of the Lingle administration. In just a few more hours, Hawaii will see which campiagns struck the right chord with voters. 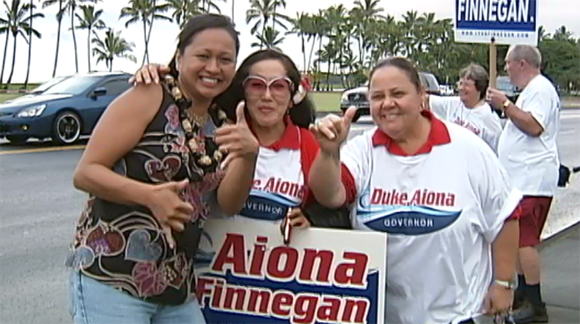