Media release | Office of the Governor Governor Affirms Commitment to Energy Progress Honolulu – In a move to direct Hawai‘i toward energy independence, Governor Neil Abercrombie today announced the appointment of State Representative Hermina Morita as the chair of the Public Utilities Commission (PUC). “Hawai‘i has made good progress addressing energy issues, and Rep. […] 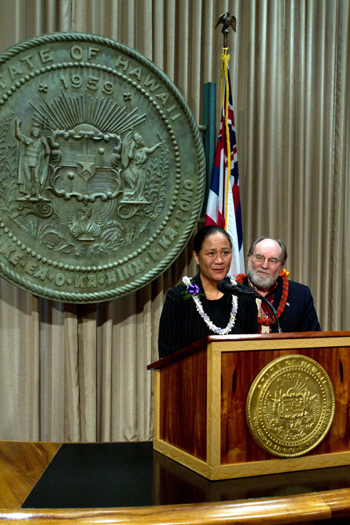 Media release | Office of the Governor

Honolulu – In a move to direct Hawai‘i toward energy independence, Governor Neil Abercrombie today announced the appointment of State Representative Hermina Morita as the chair of the Public Utilities Commission (PUC).

“Hawai‘i has made good progress addressing energy issues, and Rep. Morita has been instrumental as one of the key lawmakers in making that happen,” Governor Abercrombie said. “She is clearly committed to advancing clean energy, and she will bring credibility, knowledge and leadership to improve the Public Utilities Commission. The PUC is the key to Hawai‘i’s energy future and connecting our islands so we can build a sustainable economy.”

Carlito Caliboso has been PUC Chair since 2003. Ms. Morita’s appointment fills the remainder of a six-year term ending June 30, 2014 and requires confirmation by the State Senate.

“I have spoken with Mr. Caliboso and thanked him for his service,” Governor Abercrombie said.

The PUC, comprised of three members, is a rate-setting agency for franchised or certificated public service companies that operate in the State. The PUC also determines the allowable rate of earnings and issues guidelines concerning the management of utility businesses. It also acts on requests for the acquisition, sale, disposition or other exchange of utility properties, including mergers and consolidations.

“The PUC is a critical economic driver for the State and its decisions affects all residents and businesses throughout Hawai‘i,” Rep. Morita said. “It oversees essential services such as electricity, the state’s communications, and barge-cargo system throughout our islands.”

Rep. Morita’s appointment leaves a vacancy in the State House of Representatives for District 14 which includes Hanalei, Anahola, Kealia, Kapaa and Waipouli. According to state law, the Governor will appoint her replacement after receiving a list of candidates from Rep. Morita’s district and political party, the Democratic Party.

Rep. Morita was first elected to the Hawai‘i State House of Representatives in 1996. Currently, she serves as the Chair of the House Committee on Energy & Environmental Protection and is a member of the Water, Land Use & Ocean Resources, Housing, Judiciary and Consumer Protection Committees.

A recognized legislative leader for environmental and energy issues, Rep. Morita has worked on numerous laws regarding Hawai‘i’s energy policy. She has been a longtime advocate for the use of renewable energy as a pathway to peace, economic stability and social justice. Rep. Morita has served on the Kauai Planning Commission and Kauai Police Commission.

“Under Chair Caliboso’s thoughtful and steady leadership, the PUC has been evolving to keep up with changing technology and innovation to meet the state’s changing policies and consumer demands,” Rep. Morita said. “I hope to build on that foundation and continue the move toward a more self-sufficient Hawai‘i.”