Media release | USGS, Hawaiian Volcano Observatory Mount Merapi volcano in central Java, Indonesia, began erupting explosively on October 26, followed by extrusion of lava in the summit crater, and culminating in stronger explosions during the night of November 4-5. The volcano continued to erupt lava and generate moderate, but declining, explosive activity through the […] 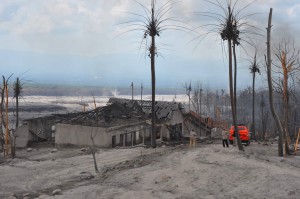 Mount Merapi volcano in central Java, Indonesia, began erupting explosively on October 26, followed by extrusion of lava in the summit crater, and culminating in stronger explosions during the night of November 4-5. The volcano continued to erupt lava and generate moderate, but declining, explosive activity through the end of November.

Three months later, tens of thousands of people are still struggling to deal with the losses caused by the eruption and lahars (Indonesian word for debris and mud flows) that continue to sweep down river valleys during heavy rain. For example, in early January, lahars forced about 9,000 people to flee from their homes.

The October-November eruption was the largest since 1872. The 2010 activity killed 341 people, destroyed more than 2,000 homes, forced evacuation of nearly 350,000 people, and closed airports and cancelled hundreds of international flights to and from Indonesia. Financial losses are estimated at US$781 million.

Loss of life, however, would have been staggering if not for accurate warnings issued by scientists of Indonesia’s Center of Volcanology and Geological Hazard Mitigation. Equally important were the massive evacuations and the more than 700 evacuation centers organized and supported by Indonesia’s civil authorities and others.

Their actions easily saved more than 10,000 people from certain death, possibly more than 20,000.

Mount Merapi is well known for its small- to moderate-sized eruptions every few years—lava dome extrusion in the summit crater and dome collapse down the volcano’s steep flanks that form extremely hot, fast-moving pyroclastic flows. Such flows commonly reach less than 8-10 km (5-6 miles) from the summit.

Scientists familiar with Merapi’s eruptive history of the past few hundred to few thousand years also know that much larger explosive eruptions occur, but less frequently. Fueled by a more gas-rich magma rising from a deeper source area beneath the volcano, such explosive eruptions generate larger pyroclastic flows that easily reach 15 km (9 miles) and, occasionally, more than 20 km (12 miles) from the summit.

The difference between a small-to-moderate and a large eruption can mean the difference between life and death for tens of thousands of people living on the flanks of Merapi. Each time the volcano shows signs of an impending eruption, scientists and civil authorities face a critical challenge—deciphering which type is most likely to occur and determining the size of areas to be evacuated in order to get people out of reach from pyroclastic flows.

The challenge is especially acute because there is not yet a sure method to forecast when a “typical” larger explosive eruption is more likely to occur than a “typical” small one.

The overall higher energy released by earthquakes and tremor, the more rapid deformation of the summit area of the volcano before October 25, the much higher rates of lava extrusion during the first week of eruption, and the larger release of carbon dioxide and sulfur dioxide gas, all pointed to the likelihood that a more gas-rich magma was moving quickly to the surface during the early part of the eruption.

The beginning of the eruption was forecast by scientists and they raised the alert to the highest level (“Awas” or “beware”) at 18:00 on 25 October (Merapi time). The warning indicated imminent eruption and called for evacuation of about 40,000 people within 10 km of the summit. The eruption began 23 hours later on 26 October at 17:02.

The evacuation area was extended to 15 km (9 miles) on November 3 and to 20 km (12 miles) early on the morning of November 5, forcing tens of thousands more to move immediately out of harm’s way.

Tragically 341 people were killed and many more injured during the eruption, but tens of thousands were saved by the timely and effective response of Indonesia’s volcano scientists. This will surely stand as one of the most significant successes in modern volcano hazards and risk mitigation. Their recognition that a larger-than-usual explosive eruption was likely, based on escalating monitoring signals prevented a catastrophe.

Photo caption: House in the village of Kopeng, 6 km (3.7 miles) from summit of Mount Merapi, destroyed by the explosive eruption.