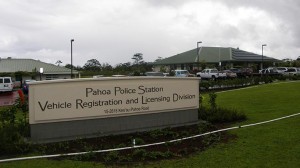 County dignitaries and members of the public celebrated the grand opening of the new Pāhoa police station Thursday morning (February 17).

The new station, located just north of Pāhoa town on Highway 130, will replace a converted kit house in Pāhoa town that functions as a police substation.

The new station has more workspace that the old one, is more secure, and includes three holding cells, surveillance cameras and plenty of parking.

Citizens may renew their driver’s licenses and register their vehicles in a portion of the new building operated by the County Department of Finance. In the near future, they will be able to apply for gun permits and register firearms by appointment. (The Police Department will notify the public when firearm registration at the Pāhoa station becomes available.)

The Puna District is the third busiest police district on the island – behind South Hilo and Kona. In Fiscal Year 2009-2010, 4,076 of Puna’s cases came from lower Puna, compared with 2,917 from upper Puna.