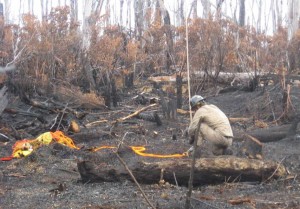 Fire Overview: Napau Fire Start Date – March 5, 2011/ (Lat/Lon: 19⁰ 22’29” x 155⁰ 7’ 25”; el. 2,450’). The Napau Fire is 50% contained. Firefighters experienced very little fire activity due to lighter than expected trade winds and light rain; and, there was no increase in acreage. Approximately 2,076 acres have burned. Due to favorable weather, firefighters were able to hold the southern spread of the fire and cool (cold trail) hot spots 50’ into the burn. Firefighters on the north perimeter accomplished similar work with no fire spread. The Napau Fire is approximately seven miles southeast of the Kilauea Visitor Center, located on the east rift of Kilauea Volcano. It is a lava caused wildfire resulting from the March 5, 2011, Kamoamoa Fissure Eruption.

Strategy: The continued priority is to protect the East Rift SEA, on the north perimeter of the fire. Two additional Kipukas, islands of vegetation, have been identified as protection priorities. The Kealakomo and Naula SEAs are on the south side of the Chain of Craters Road. The prime objective is to confine the fire to the current perimeter and acreage. Firefighter and visitor safety is always the number one objective. Rough terrain, obscure holes, standing dead trees and other hazards exist. There have been no injuries on this fire.

Values to be protected: All fires pose significant threats to the ecological health of the park, which are not fire adaptive, and will be put out. A high priority fire protection goal is the east rift Special Ecological Area (SEA), an intact lowland rain forest, which has been intensively managed to exclude invasive species and protect and restore highly valued native plant and animal communities. Protected over decades by Hawai’i Volcanoes National Park, the rain and mesic forests threatened by the spread of the Napau Fire are home to plants, birds, bugs, spiders, and bats found only in Hawai’i. They include the endangered Hawaiian bat (`ope`ape`a) Hawaiian hawk,(`io) and other uniquely Hawaiian plants and animals such as Hawaiian thrush, (`oma`o), lama and sandalwood trees, happyface spiders, carnivorous caterpillars, and Hawaiian honeycreepers (`apapane and `amakihi). National park and USGS Hawaiian Volcano Observatory (HVO) infrastructures, monitoring equipment, and other visitor features near the fire are also being protected.

Air and Smoke: Trade winds continued to blow with less intensity, and they were accompanied with frequent rain showers. Smoke was not visible along the Chain of Craters Road. There are no active lava flows in the park. Although the flow has “stagnated”, it still has the potential to ignite surrounding vegetation. In addition to smoke, air quality is constantly monitored in regards to sulfur dioxide emissions from volcanic activity. Fire managers will continue to coordinate fire efforts with USGS HVO scientists regarding eruption activity and air quality.

Closures: The Chain of Craters Road is re-opened. Drivers are urged to be diligent while driving, particularly near the hair-pin turn, as firefighters and fire engines are on the road. 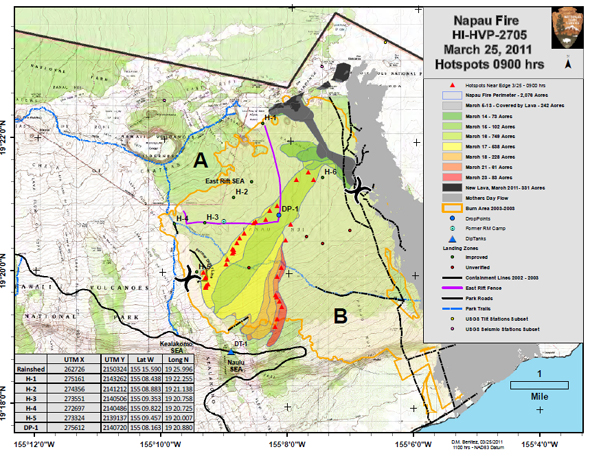