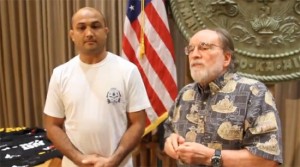 Video courtesy Office of the Governor

On BJ Penn’s popular MMA website, bjpenn.com, the headline for the video post says Abercrombie is “100% dedicated to bringing UFC to Hawaii”. In the video, Penn says the UFC has never been to Hawaii before.

“We’re gonna make it happen,” Abercrombie says in the footage, shot from the governor’s office. “We are very grateful to the UFC for thinking about coming out here to Hawaii.”

Along with autographing his book for the Governor, Penn also sent a message about engaging Hawaii’s youth in athletic activities. In fact, Abercrombie said that Hawaii is going to be starting a “sports council” with “BJ as the heart and soul of it”. The governor says he will see to it that “our education system is reflective of the tremendous athletes and sports foundation that we have here in Hawaii.”