UPDATE: We have updated this story with some incredible video courtesy Seth Hodges, a summer school student from Texas studying Marine Science, via UH-Hilo.   PUNALUU, Hawaii – This interesting story detailing the rescue of a 305 pound honu’ea at the popular Punaluu Beach Park on the south side of the Big Island of Hawaii has […] 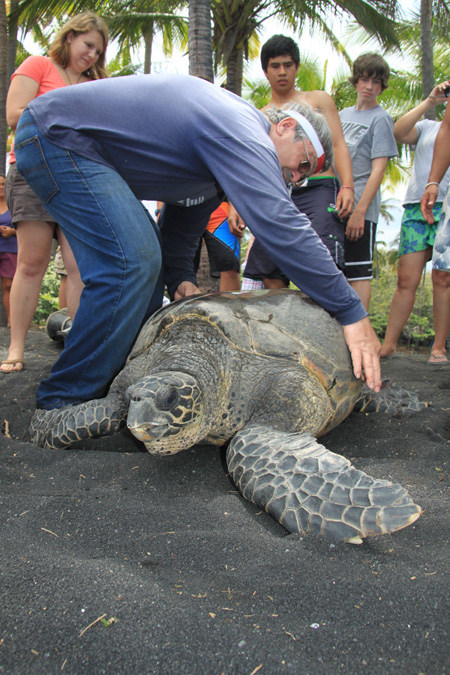 UPDATE: We have updated this story with some incredible video courtesy Seth Hodges, a summer school student from Texas studying Marine Science, via UH-Hilo.

PUNALUU, Hawaii – This interesting story detailing the rescue of a 305 pound honu’ea at the popular Punaluu Beach Park on the south side of the Big Island of Hawaii has made its way to our inbox, thanks to the University of Hawaii – Hilo.

University of Hawai`i at Hilo students enrolled in the Marine Science (MARE) Summer Program were recently treated to a rare hands-on learning experience as they witnessed the real-life rescue of an endangered sea turtle at Punalu`u.

But their session was interrupted when Hawai`i Island Hawksbill Turtle Recovery Project Coordinator Will Seitz reported that a green sea turtle had inadvertently crawled into and became stuck in a freshwater pond at the site of the old Punalu’u Village Restaurant. The distressed animal turned out to be a critically endangered female Hawksbill sea turtle (honu’ea), whose numbers total just over 100 nesting females. Dr. Turner and Balazs initially tried deploying a large net to surround the animal. That is until Turner felt something brush up against him.

“The turtle bumped into me right as we got into the water, then swam toward the other end of the pond,” Turner explained, “The second time I felt the turtle swim by I dove under, grabbed onto a hind flipper, and held on until the rest of the team could help. I couldn’t see the entire body due to the muddy water, but I could tell it was a big animal.”

It wasn’t until students and researchers managed to restrain the animal and place it on a scale that they understood the extent of their discovery. At 309-pounds, the female Hawksbill was one of the largest ever recorded. The animal was examined for injuries, measured, tagged, and then released into the ocean as visitors and beach-goers looked on and erupted into applause.

For Balazs, a world renowned sea turtle expert, the episode had a touch of déjà vu. It was just over 11 years ago that Balazs, with the help of UH Hilo Professor Leon Hallacher and a group of university Marine Option Program (MOP) students saved another female Hawksbill from the very same pond.

“George was telling us the story of that Hawksbill as we were setting up, but we had no idea that history was about to repeat itself,” said Jennifer Turner.

The latest rescue is apparently known to observers. She is believed to be one of an estimated 12 percent of Hawksbill females that utilize multiple beaches.

The animal was seen nesting a few days ago at Kamehame, where she was first tagged in 2005. She was also spotted there in 2007 in addition to a site at Halape.

How she ended up in the freshwater pond remains an open question. Balazs believes the animal may have entered the pond during the March tsunami and remained there until her rescue. There are also reports that she crawled into the pond sometime this summer after attempting to nest on Punalu`u beach, where a nesting turtle had been reported by the public weeks earlier.

What is certain is that for everyone involved, the rescue of a rare Hawaiian Hawksbill turtle was an educational experience they won’t soon forget and one that left quite an impression on the students.
“Awesome,” said one student when asked how it felt to be involved in the rescue. “I’m seriously thinking of transferring here.” 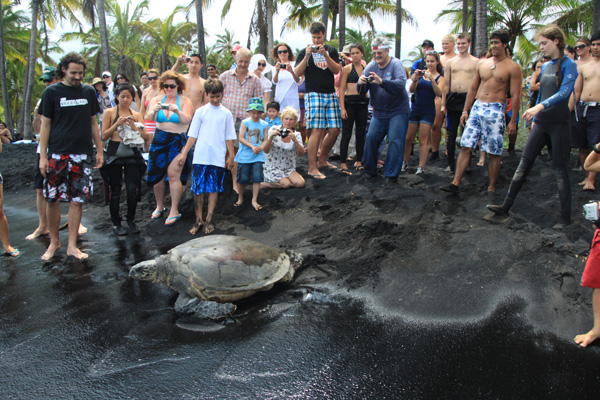