The Hawaii County Office of the Mayor offers this media release:

The project, owned by SunRun, Inc., will sell energy to the County of Hawai‘i under a long-term Power Purchase Agreement (“PPA“) at half the current electricity rates. During hours when the project produces more than the needs of the WHCC, excess power will be sold to HELCO under the first “Feed-In Tariff” agreement on the Island of Hawai‘i.

The mayor lauded the project as an example of the County’s commitment to clean, renewable energy. “This PV system harnesses the power from the sun, saves county government $46,000 a year and creates more stability in the price of electricity,” said Kenoi. “And we sell any excess energy back to HELCO.”

“We congratulate the County of Hawai‘i as the first to take advantage of our new feed-in tariff. The leaders of our County are doing a great job of leading by example to move Hawai‘i Island to energy independence,” said Jay Ignacio, HELCO president.

The WHCC installation is expected to generate more than 400,000 kilowatt hours of solar electricity per year, the equivalent of displacing 770 barrels of oil, making the campus Net Zero Energy/Zero Carbon Emissions facility.

“This innovative public-private partnership allows the county to benefit from clean and cost-effective solar power at zero cost to the taxpayer,” said Kenoi. “This reduces our environmental impact and sets up the future infrastructure for renewable-powered electric vehicles.”

During the blessing of the PV project, Mayor Kenoi outlined a county initiative aimed at reducing government energy cost by $34 million in 10 years. This initiative, which is called Vision 20/15 Green Government Action Plan, seeks to reduce fossil fuel consumption and its associated carbon emissions by 20 percent over the next five years by shifting to renewable power, promoting conservation, and upgrading internal policies and practices of government operation.

“Solar Power at the West Hawai‘i Civic Center is just the beginning,” said Kenoi. “The Green Government Action Plan provides a blueprint for county government to proactively reduce our energy and resource consumption, which will result in long-term cost savings and allow county government to be an example of sustainable energy practices.”

The County is taking a longer view on energy and resource efficiency investments, requiring the return on investment (ROI) within one to five years. The Mayor’s Green Team identified an abundance of resource-saving opportunities across county government, such as new software, efficiency retrofits, and on-site renewable energy generation.

“A $500,000 investment in new LED streetlamps will save $170,000 in annual energy costs.” said Hawai‘i County Energy Coordinator Will Rolston. “Similarly, a $2 million investment in energy efficiency upgrades at 10 county buildings and facilities will generate $500,000 in annual energy savings and improve county’s environmental, energy and economic performance. Another public-private partnership is planned for repowering our Department of Water Supply – Lalamilo Wind-farm to renewably-power our water-pumping operations.”

The Government-wide plan of action will move the county towards energy independence through a 20-percent reduction of fossil fuel use and carbon emissions within the next five years. The recommendations outlined in the Green Government Action Plan will help to improve infrastructures, assets and procurement practices of County government.

“The plan provides a first comprehensive snapshot and strategies to reduce carbon emissions and the energy costs of government operations,” said Alex Frost, County Sustainability Coordinator. “The inter-departmental team is already working on implementation of 28 action items to move toward the goals set by the mayor to perpetuate the Island of Hawai‘i as a world leader in renewable energy.” 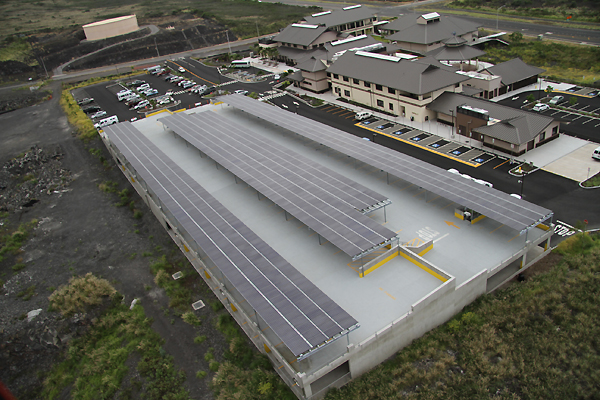