Video by Matt Binder, Visionary Video | Voice of Stephanie Salazar KAILUA-KONA, Hawaii: The Kona Coffee Farmers Association has called for a boycott of Safeway, and on Thursday members marched outside the Kona location of the national store chain. The situation all revolves around this bag of coffee: the Safeway Select Kona Blend. Kona Coffee […] 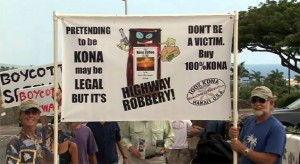 KAILUA-KONA, Hawaii: The Kona Coffee Farmers Association has called for a boycott of Safeway, and on Thursday members marched outside the Kona location of the national store chain.

The situation all revolves around this bag of coffee: the Safeway Select Kona Blend. Kona Coffee Farmers are up in arms over what they say is a misleading label.

Paul Uster says he and his fellow coffee growers have been working on trying to get Safeway to revise its packaging for many months already, and felt they were getting nowhere with the corporation…

The farmers even produced a letter, showing that State Director of Agriculture Russell Kokubun wrote to the company, asking them to reconsider their marketting of the coffee, but to no apparent avail.

The Kona Coffee Famers Association president says the alleged mislabelling has a negative effect on the Kona coffee industry.

The group issued this media release on the matter back in July:

Safeway’s mainland stores are selling coffee labeled as “Safeway Select Kona Blend”, complete with a label that reads “Revel in the unmatched taste of savory beans from Hawaii’s Big Island”. The package sells for one quarter the price of genuine Kona coffee as sold by Peet’s and Starbucks, and Safeway has freely admitted that the coffee they sell contains only “some” Kona coffee and they decline to say what percentage is genuine or what the origin of the fake beans is.

By a resolution passed this week, the Kona Coffee Farmers Association is calling for a nationwide boycott of all Safeway stores in response to Safeway’s total disregard of concerns about the sale of deceptively labeled “Safeway Select Kona Blend”. At KCFA’s request, in April, Chairman Kokubun of the Hawaii Department of Agriculture sent Safeway a letter to “strongly urge voluntary compliance with our coffee labeling laws …”. More than three months later, Safeway has yet to respond to Kokubun’s letter.

Bruce Corker, Chair of the KCFA Legislative Committee, said “KCFA is calling on customers in Hawaii and on the mainland to boycott Safeway stores until Safeway accurately labels its coffee.” He further explained, “KCFA has no problem with retailers mixing coffee origins to make whatever blend they think their customers will enjoy. But those mixtures should be accurately labeled so as not to mislead customers.” The KCFA has, since its inception, held the view that deceptively labeled blends damage the reputation of Kona coffee by misleading consumers into drinking an inferior product that they then associate with the Kona name, leading to a loss of perceived value, and actual value for Kona coffee farmers. 100% Kona coffee is one of Hawaii’s premier agricultural products of which the State is very proud. Safeway is perpetuating damaging exploitation of the Kona coffee reputation, and needs to be persuaded to change the labeling of its “Safeway Select Kona Blend ” to prominently disclose the percentage of Kona-grown coffee and the origin of the non-Kona coffee in the package.