Video by Daryl Lee | Voice of Stephanie Salazar HILO, Hawaii: After an urgent series of public alerts, Hawaii County Police have arrested a 35-year-old Pāhoa man in connection with the attempted kidnapping and attempted sexual assault of a female child in a restroom at Hilo Union School on Tuesday morning. According to police: Samson […]

HILO, Hawaii: After an urgent series of public alerts, Hawaii County Police have arrested a 35-year-old Pāhoa man in connection with the attempted kidnapping and attempted sexual assault of a female child in a restroom at Hilo Union School on Tuesday morning.

Samson Perez, also known as Samson Kahumoku, was located on Aupuni Street in Hilo at 9:50 a.m. and arrested without incident on suspicion of fourth-degree sexual assault, attempted kidnapping and attempted first-degree sexual assault. He is being held at the Hilo police cellblock while detectives continue the investigation. 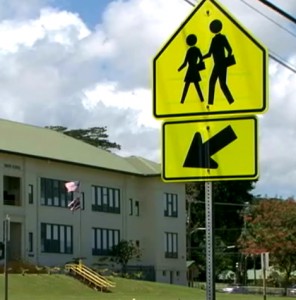 Earlier in the day, police issued a number of Nixel alerts warning the public to be on the look out for the suspect – who was possibly riding a bike – after “the child managed to escape from the man, who was last seen on Kapiolani Street heading in the direction of Haili Street around 6:30 a.m.”

“Police are very anxious to identify and apprehend this predator before any child is hurt,” one of the alerts said.

In a letter sent home to parents, Hilo Union School Vice Principal Trisha Burns wrote that at 6:40 a.m. “there was an incident where a stranger was on campus and approached a student of ours. Fortunately the student was smart enough to follow safety procedures, and ran to tell our cafeteria staff. The police were informed, and have followed through on investigating the situation.”

“We would like to assure you,” the letter continued, “that everyone on campus is safe, and no one was injured from today’s incident. We will continue to be diligent in creating a safe and secure environment on our campus.”

UPDATE: This story has been updated with video from Daryl Lee, which includes interviews with concerned parents and Hawaii County Police Captain Randall Medeiros.

UPDATE (Thursday, Sept. 22): The Hawaii County Police have released the suspect. The news, accompanied by a lengthy explanation, was issued in the following media release:

Police released the suspect arrested on Tuesday (September 20) in connection with a reported attempted kidnapping and attempted sexual assault on that day. Samson Perez, also known as Samson Kahumoku was released from police custody after detectives conferred with county prosecutors.

On Tuesday, police received a report of a female child being in a confrontation with an adult male within a restroom on the campus of a public school in Hilo. The child managed to escape from the man, who was last seen on Kapiʻolani Street heading in the direction of Haili Street around 6:30 a.m. Responding officer took the suspect into custody a few hours later, locating him on Aupuni Street in Hilo.

As part of the conferral process with prosecutors, taken into account was all the information uncovered during the investigation coupled with the child’s ability to proceed with prosecution at this point in time. Within a week, the victim would be required to testify in open court, with the suspect present and be exposed to cross examination by a defense attorney. Speaking in general terms, cases involving child victims of such traumatic events often take longer to adjudicate due to concerns about what is in the best interest of the child victim. While the public’s safety is always a consideration, the ability of the child to testify without inflicting additional trauma on him or her weighs heavily during the decision making process.

Anyone with information regarding this investigation is asked to contact Detective Daylan Asuncion of the Juvenile Aid Section at (808) 961-8843. Individuals wishing to remain anonymous may call Crime Stoppers at 961-8300 in Hilo or 329-8181 in Kona. All Crime Stoppers information is kept confidential.