Video by David Corrigan, Baron Sekiya of Hawaii247.com | Voice of Stephanie Salazar HILO & KONA, Hawaii: Over 4,800 miles from New York City on the Big Island of Hawaii, residents inspired to demonstrate in support of the Occupy Wall Street movement lined roads on either side of the moku. In the rainy windward city […] 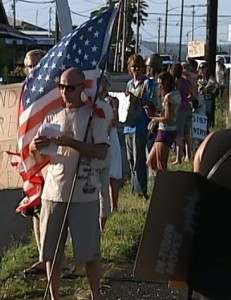 HILO & KONA, Hawaii: Over 4,800 miles from New York City on the Big Island of Hawaii, residents inspired to demonstrate in support of the Occupy Wall Street movement lined roads on either side of the moku.

In the rainy windward city of Hilo, about 80 to 100 folks set up outside the Kilauea Financial Plaza, fronting Merrill Lynch.

Meanwhile, a two hour drive away on the west side of the island, residents of Kona amassed to sign wave in solidarity.

The Wall Street “occupation”, seemingly inspired by the Arab Spring movement, has been ongoing in New York City’s famous global business district. The participants are protesting against social and economic inequality, declaring themselves to be a part of the country’s 99%, a powerless majority when compared to the influence of the wealthiest 1%.

Hawaii is known for its population of rugged individualists and transplants looking to keep a good distance from busy metropolitan culture. Therefore, its not a surprise that an outspoken island bunch would show support in this fashion. What is a bit more surprising were the numbers… with little notice, the events drew crowds at both locations. A sign, perhaps, that this cause has struck an immediate nerve amongst an American population that is as far removed, physically, from Wall Street as possible.

One of the participants in the Hilo demonstration, Jim Albertini, sent out this email a few hours after the event:

Today’s protest in Hilo was truly amazing. I expected perhaps a dozen people would show up from 4-6 PM fronting Merrill Lynch. Instead 80-100 showed up, over half –youth. It says to me that the bleak future brought on by Wall St. greed is the Vietnam draft for today’s generation. I see reason for hope in the growing resistance of today’s youth. It is transforming a generation into activists for justice and peace.

It was a very uplifting day. The spirit was strong from those participating in the protest and those passing by. People made their own signs and came to stand in solidarity with people occupying Wall St. and people around the world saying no to corporate dominance and corporate greed and influence in government. Where the Hilo and other protests will lead is unclear, but the momentum and a movement is building. Let us seek to work together and support one another.