DOT, Puna will gather again in Pahoa over Highway 130

By David Corrigan and Tim Bryan [Video, file video by David Corrigan] HILO, Hawaii: During his pre-legislative session talk story in Hilo last night, Senator Gil Kahele reiterated his commitment to solving transportation problems in Puna. At the top of everyone’s list is Highway 130, which is already slated for massive improvements in the coming […] 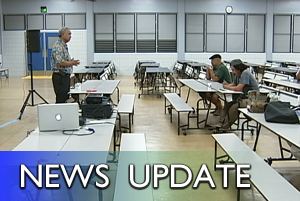 At the top of everyone’s list is Highway 130, which is already slated for massive improvements in the coming years.

In September, Kahele organized a community meeting with Department of Transportation officials in Kea’au… however, there was much confusion over what was actually planned for the project. As a result, funds that were to be used in the Puna project were re-routed to a project on Maui, Kahele said.

Kahele said there will be another meeting in Pahoa  to discuss the project and clarify information on  the evening of December 1st.

Building upon the recently completed DOT forum held in September, Hawai’i Island’s District 2 State Senator is using this forum to specifically address all State Highway 130 projects in Puna and to help clarify some of the issues that were addressed in September at the DOT Town Hall held in Keaau. Sal Panem, Hawai’i Island’s District Engineer will be the featured speaker and is expected to give a comprehensive report on Highway 130 and all transportation projects associated with the Puna Highway. Mr. Panem will also give a a current status update and time line for both short term and long term projects.

“Highway 130 is my #1 priority in Puna. The feedback I received from the Transportation Town Hall I hosted in September was that those that attended felt not enough time was spent on Highway 130 and the information that was provided was not clear and concise. Several members of the community who have spent a significant amount of time on Highway 130 said they felt confused and unsure of the projects time line and specific details. I discussed this with the State DOT directors and we were all in agreement that we should go back to Puna and provide a presentation focused exclusively on Highway 130, and we are doing just that. We have decided to go into the heart of Puna and host this forum at the Pahoa Neighborhood Facility on December 1st. My one request is that the community come out and attend this important meeting and we get as much participation and attendance from the forty thousand plus residents of the Puna District. Tell your family, friends, neighbors and community associations, if Highway 130 is important to you come out and attend this meeting, I am providing you, my constituents of Puna the opportunity to be heard, I hope to see you there” Senator Gil Kahele

If you have a specific issue you want addressed in regards to Highway 130 email your issue(s) to:

or call/fax in your issue to: