By David Corrigan and Stephanie Salazar [image courtesy NASA/JPL] MAUNA KEA, Hawaii: Observations made from the summit of Mauna Kea continue to assist astronomers in turning up new planets. Said to be largest single announcement of planets in orbit around stars more massive than the sun, aside from the discoveries made by the Kepler mission, […] 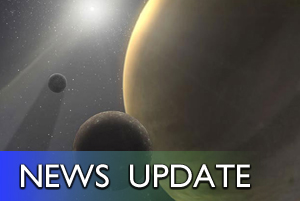 MAUNA KEA, Hawaii: Observations made from the summit of Mauna Kea continue to assist astronomers in turning up new planets.

Said to be largest single announcement of planets in orbit around stars more massive than the sun, aside from the discoveries made by the Kepler mission, a team led by scientists at the California Institute of Technology used the Keck Observatory to find 18 exoplanets, recently.

This finding marks a 50 percent increase in the number of known planets orbiting massive stars. The discovery helps researches understand how planets might form… the findings also lend further support to the theory that planets grow from seed particles that accumulate gas and dust in a disk surrounding a newborn star.

From the Keck Observatory:

A whopping 18 new, bona fide exoplanets have been discovered and confirmed by a team of Caltech astronomers using the Keck Telescopes and two other ground-based observatories.

“It’s the largest single announcement of planets in orbit around stars more massive than the sun, aside from the discoveries made by the Kepler mission,” says John Johnson, assistant professor of astronomy at Caltech and the first author on the team’s paper, which was published in the December issue of The Astrophysical Journal Supplement Series. The Kepler mission is a space telescope that has so far identified more than 1,200 possible planets, though the majority of those have not yet been confirmed.

Using the Keck Observatory—with follow-up observations using the McDonald and Fairborn Observatories in Texas and Arizona, respectively—the researchers surveyed about 300 stars. They focused on those dubbed “retired” A-type stars that are more than one and a half times more massive than the sun. These stars are just past the main stage of their life—hence, “retired”—and are now puffing up into what’s called a subgiant star.

To look for planets, the astronomers searched for stars of this type that wobble, which could be caused by the gravitational tug of an orbiting planet. The wobble is given away by the fact that the light of those stars have a periodic lengthening and contracting of wavelengths due to the stars’ motion away from and toward the observer—better known as a Doppler shift. Using this, the team found 18 planets with masses similar to Jupiter’s.

This new bounty marks a 50 percent increase in the number of known planets orbiting massive stars and, according to Johnson, provides an invaluable population of planetary systems for understanding how planets—and our own solar system—might form. The researchers say that the findings also lend further support to the theory that planets grow from seed particles that accumulate gas and dust in a disk surrounding a newborn star.

According to this theory, tiny particles start to clump together, eventually snowballing into a planet. If this is the true sequence of events, the characteristics of the resulting planetary system—such as the number and size of the planets, or their orbital shapes—will depend on the mass of the star. For instance, a more massive star would mean a bigger disk, which in turn would mean more material to produce a greater number of giant planets.

In another theory, planets form when large amounts of gas and dust in the disk spontaneously collapse into big, dense clumps that then become planets. But in this picture, it turns out that the mass of the star doesn’t affect the kinds of planets that are produced.

So far, as the number of discovered planets has grown, astronomers are finding that stellar mass does seem to be important in determining the prevalence of giant planets. The newly discovered planets further support this pattern—and are therefore consistent with the first theory, the one stating that planets are born from seed particles.

“It’s nice to see all these converging lines of evidence pointing toward one class of formation mechanisms,” Johnson says.

The new batch of planets have yet another interesting pattern: their orbits are mainly circular, while planets around sunlike stars span a wide range of circular to elliptical paths. Johnson says he’s now trying to find an explanation.

For Johnson, these discoveries have been a long time coming. This latest find, for instance, comes from an astronomical survey that he started while a graduate student; because these planets have wide orbits, they can take a couple of years to make a single revolution, meaning that it can also take quite a few years before their stars’ periodic wobbles become apparent to an observer.

“I liken it to a garden—you plant the seeds and put a lot of work into it,” he says. “Then, a decade in, your garden is big and flourishing. That’s where I am right now. My garden is full of these big, bright, juicy tomatoes—these Jupiter-sized planets.”

The other authors on the The Astrophysical Journal Supplement Series paper, “Retired A stars and their companions VII. Eighteen new Jovian planets,” include former Caltech undergraduate Christian Clanton, who graduated in 2010; Caltech postdoctoral scholar Justin Crepp; and nine others from the Institute for Astronomy at the University of Hawaii; the University of California, Berkeley; the Center of Excellence in Information Systems at Tennessee State University; the McDonald Observatory at the University of Texas, Austin; and the Pennsylvania State University. The research was supported by the National Science Foundation and NASA.