Media release by Canada-France-Hawaii Telescope: For the first time, astronomers have mapped dark matter on the largest scale ever observed. The results, presented by Dr Catherine Heymans of the University of Edinburgh, Scotland, and Associate Professor Ludovic Van Waerbeke of the University of British Columbia, Vancouver, Canada, are being presented today to the American Astronomical […] 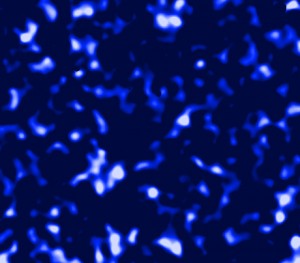 For the first time, astronomers have mapped dark matter on the largest scale ever observed. The results, presented by Dr Catherine Heymans of the University of Edinburgh, Scotland, and Associate Professor Ludovic Van Waerbeke of the University of British Columbia, Vancouver, Canada, are being presented today to the American Astronomical Society meeting in Austin, Texas. Their findings reveal a Universe comprised of an intricate cosmic web of dark matter and galaxies that spans more than one billion light years.

An international team of researchers lead by Van Waerbeke and Heymans achieved their results by analysing images of about 10 million galaxies in four different regions of the sky. They studied the distortion of the light emitted from these galaxies, which is bent as it passes massive clumps of dark matter during its journey to Earth.

Galaxies included in the survey are typically six billion light years away. The light captured by the telescope images used in the study was emitted when the Universe was six billion years old – approximately half the age it is today.

The team’s result has been suspected for a long time from studies based on computer simulations, but was difficult to verify owing to the invisible nature of dark matter. This is the first direct glimpse at dark matter on large scales showing the cosmic web in all directions.

Professor Ludovic Van Waerbeke, from the University of British Columbia, said: “It is fascinating to be able to ‘see’ the dark matter using space-time distortion. It gives us privileged access to this mysterious mass in the Universe which cannot be observed otherwise. Knowing how dark matter is distributed is the very first step towards understanding its nature and how it fits within our current knowledge of physics.”

Dr Catherine Heymans, a Lecturer in the University of Edinburgh’s School of Physics and Astronomy, said: “By analysing light from the distant Universe, we can learn about what it has travelled through on its journey to reach us. We hope that by mapping more dark matter than has been studied before, we are a step closer to understanding this material and its relationship with the galaxies in our Universe.”

For Dr Christian Veillet, CFHT Executive Director, this dark matter study illustrates the strong legacy value of the CFTHLS: it is now enabling exciting results obtained by teams from many nations which use the CFHTLS images retrieved from the Canadian Astronomy Data Centre where they are archived and publicly available.

Professor Lance Miller, from Oxford University said: “This result has been achieved through advances in our analysis techniques which we are now applying to data from the Very Large Telescope’s (VLT) Survey Telescope in Chile.”

Professor Koen Kuijken, from Leiden University, said: “Over the next three years we will image more than 10 times the area mapped by CFHTLenS, bringing us ever closer to our goal of understanding the mysterious dark side of the Universe.”

PHOTO (top right): The observations show that dark matter in the Universe is distributed as a network of gigantic dense (white) and empty (dark) regions, where the largest white regions are about the size of several Earth moons on the sky. Credit: Van Waerbeke, Heymans, and CFHTLens collaboration. 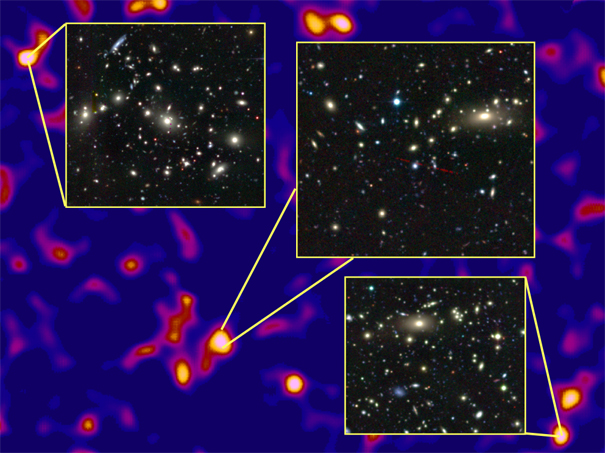