Jack Thompson made a solemn return to his property on Saturday evening, to see with his own eyes the devastated swath of smoldering lava rock where his home stood 24 hours earlier. 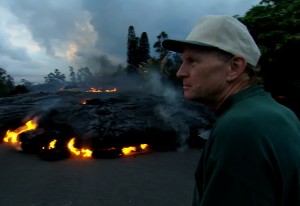 ROYAL GARDENS, Hawaii: Jack Thompson made a solemn return to his property on Saturday evening, to see with his own eyes the devastated swath of smoldering lava rock where his home stood 24 hours earlier.

Thompson was well known on Hawaii Island for his 30 year stay at the Royal Gardens subdivision, which has been inundated with lava flows from the Pu’u O’o crater on the east rift zone of Kilauea since 1983.

One by one, all the homes in the neighborhood were consumed by molten lava, but somehow Thompson’s residence survived. Eventually, all access to his property was lost, as the volcano claimed the streets and forests surrounding his property. In recent years, Thompson has had to backpack his way in, and has even hitched rides with tour helicopters, to get to his house.

The so called “Lava House” became a remote tourist destination, and beckoned lavatics from on and off the island to make the pilgrimage for a close encounter with madam Pele, Hawaiian goddess of the volcano.

But on Friday night, Thompson’s luck ran out. A fast moving lava lobe rushed down the Pulama Pali and covered the home. Thompson and photographer Leigh Hilbert evacuated at the last minute with the help of Paradise Helicopters. Thompson was able to bring some items along with him, but was resigned to the fact that most of what he had now belonged to the mountain.

On Saturday, Paradise Helicopters took Thompson and vulcanographer Mick Kalber back up to Royal Gardens for look at the destruction from the night before. Thompson took a walk around the area, with hot lava still burning on the property and cascading down the cliffs. As he surveyed the site, Thompson reflects on his legendary stand in this video.