Pahoa High School celebrates the completion of a new gym on Dagger Day... and the third and final part of our look back on Hawaii County Budget Battles... 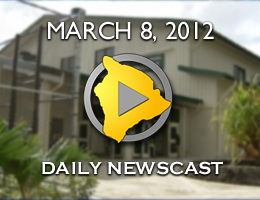 The latest round of community talk stories with Mayor Billy Kenoi begins this evening in Honokaa.

The mayor and his staff will be at the North Hawai‘i Education & Research Center in an event hosted by the Hamakua Farm Bureau.

The next meeting will be in Pahoa on March 12th at the Pahoa Neighborhood Facility.

The meeting is part of an effort to bring government to the people, according to the administration.

These March Talk Story events are just the first in this year’s series. More events in more communities are being planned, and those dates will be announced as they are finalized.

Well known farmer Richard Ha recently wrote on his blog that a Hilo farmer has reported an infestation of Bunchy Banana Top Virus.

Ha, himself a banana farmer, took photos of the diseased plants… this is what the virus looks like.

According to the College of Tropical Agriculture and Human Resources of UH Manoa, banana bunchy top virus (or BBTV) is one of the most serious diseases of banana. Once established, it is extremely difficult to eradicate or manage. BBTV is widespread in Southeast Asia, the Philippines, Taiwan, most of the South Pacific islands, and parts of India and Africa. BBTV does not occur in Central or South America. In Hawaii, BBTV was first observed in 1989 and is now widely established on Oahu. In 1995 it was discovered in the Kona area of the island of Hawaii, and in 1997 it was found on the island of Kauai.

The virus is spread from plant to plant by aphids and from place to place by people transporting planting materials obtained from infected plants. There is no cure for BBTV. Some banana varieties, like the Cavendish types, are more readily infected with the virus, but no variety of banana is resistant. Banana plants that show symptoms rarely bear fruit, and because they are reservoirs of the virus, they must be destroyed. BBTV is a serious threat to Hawaii’s banana industry and to the productivity of banana plantings in home gardens.

This is not the first time the virus has been spotted on the windward side of the Big Island. A 200 acre banana plantation in Keaau was the first to confirm the disease in 2004.

$7.48 million in Capital Improvement Project funds were released by the state on Wednesday, and some of it will be going towards Kailua-Kona area schools.

$280,000 appears headed to Holualoa Elementary School, for the design for a pedestrian buffer to ensure the safety of students and staff on campus.

It was in the fall of last year that the county was able to make big improvements in order to create a pedestrian buffer in the area, just in time for the Kona Coffee Festival.

Also, Kealakehe High School will share in a million dollar expenditure for special education renovations at various schools statewide. Kealakehe is slated to put the money towards trailer classrooms, as funding permits.

Governor Neil Abercrombie, who signed off on the money release, said in a media release that the projects are important to our students and educators as well as stimulating the economy through job creation.

The Hawaii Wildlife Fund is sponsoring a Ka’u beach cleanup on Saturday, March 10th. Organizers will determine the actual beach to be cleaned this week, based on which beach needs the most help.

Volunteers are needed, and are asked to meet at Waiohinu Beach Park, around mile marker 65, at 7:45 a.m. on Saturday.
Volunteers should wear sturdy, close-toed shoes, and bring a refillable water container, hat, bag lunch, and wear sunscreen. And of course be prepared for rain or wind, too.

The Hawaii Wildlife Fund gets some funding from the National Oceanic and Atmospheric Administration to support beach cleanups, because of marine debris that gets swept into Ka’u beaches, especially Kamilo Point – which in the past has been named the dirtiest beach in the world.

The Hawaii Wildlife Fund will provide water, a lua, bags, and gloves. Four wheel drive vehicles are necessary to get to several of the beaches that may be cleaned.

Keep Puako Beautiful, sponsored by Keep Hawaii Beautiful, was
joined by 15 volunteers that day. They cleaned roadsides from the Puako Beach Drive entry off the Queen Highway to Old Puako Road, and areas surrounding the Puako Transfer Station. , like the Puako Boat Ramp and the surrounding shoreline & trails.

The report says volunteers removed 560 lbs. of trash from the entry to the Puako and Waialea Beach community.

If you have ever wanted to know a little more about Waikii Ranch, Friday is your chance to see the area that Realtors are calling the Big Island’s premier equestrian community.

There will be a special Open House event at Waikii Ranch on Friday, March 9 from 10 am to noon. These four homes will be open for tours and realty agents will also be available to answer questions about vacant land listings in Waiki’i.

Folks who travel Saddle Road often know the ranch well… it is located in the middle of Parker Ranch country between 3,500 and 5,000 feet elevation. It is 11 miles from the town of Waimea and is nestled on the western slopes of Mauna Kea. The Ranch is over 3,000 acres in size and consists of 10, 20, and 40-acre residential lots zoned for agricultural use. The land is gently sloping pasture mixed with groves of eucalyptus and Monterey Cypress trees.

Yesterday we brought you a video about the successful final fish harvest at the Kampachi Farms’ “Velella” Research Project, in unanchored drifter pen out in the ocean, 3 to 75 miles off the Kona coast.

On Friday, another proposed open ocean fish farm project being proposed for the waters off the North kohala Coast will go before the Board of Land and Natural Resources, hoping to get a time extension on its mandated deadline.

On October 23, 2009, the BLNR approved a Conservation District Use Application and Management Plan for the construction of the Hawaii Oceanic Technology, Inc. fish farm, with conditions. One condition was that construction had to be initiated no later than two years after the CDUA approval.

Hawaii Oceanic Technology wants a two year extension, saying they are in the process of completing the US Army Corps of Engineers permitting process and a storm-water discharge permit process.

The BLNR staff is recommending the approval of the request.

We have a clarification to make on a story we reported last week about the resurrection of the Pele Defense Fund in order to oppose the latest push for geothermal energy on Hawaii Island.

Members of the organization were present outside the HELCO building in Downtown Hilo last Wednesday, in the pouring rain, protesting the company along with participants in the Occupy Hilo movement. Those representing the Pele Defense Fund also waved signs against the use of geothermal as an energy resource.

The organization led the opposition to geothermal in the 1980s and 1990s. However, the group has been quiet lately, as the most recent push for geothermal power has been gaining momentum on Hawaii Island.

The document we obtained – online – shows tax exempt status of the organization was revoked in May of 2010, and the info was posted in June 2011.

On Wednesday, a representative of the organization told us that the Pele Defense Fund is currently petitioning the IRS for reinstatement, and that the organization is far from defunct. They are no longer based in Volcano, but rather the Papa Mu Gallery at the Prince Kuhio mall in Hilo. They have been holding meetings again since the end of last year.

Big Island police arrested a man and a woman after they allegedly sold stolen jewelry to a jewelry store in South Kona.

Kona patrol officers, working in cooperation with the victim of a home burglary and a jewelry store owner, learned that items taken in the burglary in February had been sold to a jewelry store in Kealakekua. The officers made arrangements for the jewelry store to notify police when the suspects returned to sell more items.

Last Tuesday afternoon, the suspects returned to the jewelry store with more stolen goods. Police arrested them in a car parked outside the store after the transaction.

31 year old Douglas Louis, of Captain Cook and 34 year old Rashel Kahalioumi-Taketa, of Hōlualoa, were held at the Kona police cellblock while Kona patrol officers and detectives from the Area II Criminal Investigations Section continued the investigation. Police obtained a search warrant for the suspects’ car and recovered evidence from additional crimes. The offenses occurred during the months of December, January and February.

Kahalioumi-Taketa was charged with promoting a dangerous drug, possessing drug paraphernalia, four counts of burglary, six counts of theft and two counts of forgery. Her bail was set at $30,500.

The leading edge of the flows are more than 5 and a half miles southeast of Pu`u `O`o and about 3 km 2 miles from the coast. There were no active flows entering the ocean.

In our final installment in our three part series, Tim Bryan takes a look back at three years of budget battles. Today, year three of the Kenoi administration… and the political strategies intensify.

We leave you now with some hula, performed by Pahoa high school students during the dedication of the new gym.