VIDEO: 4.9 earthquake in Hawaii, reaction from visitors and residents

The east side of Hawaii Island was jolted by a 4.9 earthquake on Saturday. Geologists say the quake was 1 mile west of Honomu at a depth of 27 miles, the same place a 6.2 magnitude quake hit the Big Island in 1973.

Epicenter was deep underground near Honomu on the Hamakua Coast

HONOMU, Hawaii: The east side of Hawaii Island was jolted by a 4.9 earthquake on Saturday.

Geologists say the quake, which occurred at 10:47 a.m. HST, was 1 mile west of Honomu (thats about 10 miles north-northwest of Hilo) at a depth of 27 miles.

Folks reported feeling the sudden shake across the island, as well as Maui, on the USGS “Did You Feel It?” webpage.

In this video, one visitor from Davis, California, who was with her mom at Hilo Farmers Market, felt the quake in the Downtown area. Some people in Hilo even fled to the outdoors, but the rumbling was quickly over with and no damage was reported. Nor did the quake generate a tsunami warning.

News videographer Daryl Lee quickly mobilized for a trip up the Hamakua Coast to see if there were any after effects. There was a landslide and tree down on the Scenic Onomea Drive, but it remains unclear if the incident was a result of the earthquake or the heavy rains that were falling in the area. A Hawaii Tropical Botanical Garden gift shot employee was driving van of visitors when they saw the landslide occur.

The USGS at first measured the quake at a 4.4 magnitude, but it was later revised to a stronger 4.9 magnitude. Geologists say the earthquake struck near the same area as the 1973 M6.2 Honomu earthquake.

“Earthquakes in the area are common (several earthquakes per year)”, wrote the Hawaiian Volcano Observatory in a media release, “especially between 20 mi and 30 mi depth. Since 1960 there have been 6 magnitude-4 or greater events in this region. There may have also been an M6.1 on January 31, 1885 in the same area. Earthquakes at this depth typically occur on weaknesses within the oceanic mantle that are stressed by the weight of the island. There were no aftershocks recorded.”

A shop owner in downtown Honomu who was in Hilo when the quake struck said there were no signs of damage in her store. Items on the store’s shelves did not fall or break.

Volcano scientists say none of the earthquakes had any noticeable effect on the continuing eruption of Kilauea Volcano, nor did they produce any detectable changes at Mauna Loa Volcano.

For eruption updates and information on recent earthquakes in Hawai‘i, visit the Hawaiian Volcano Observatory website at http://hvo.wr.usgs.gov. For general information on Hawaiʻi earthquakes, go to http://pubs.usgs.gov/fs/2011/3013/. 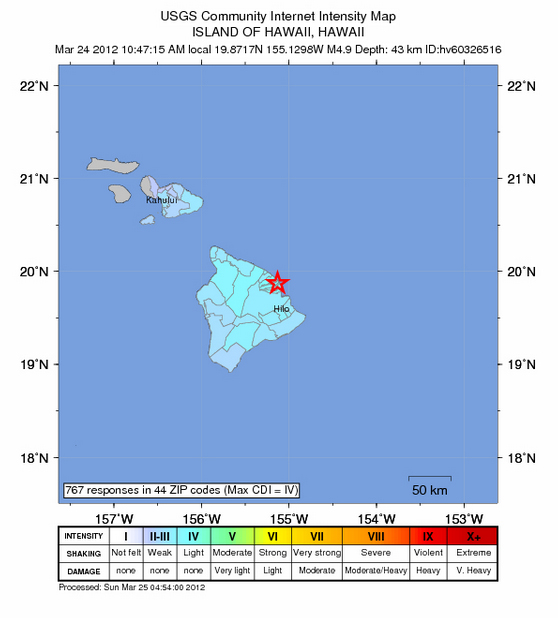