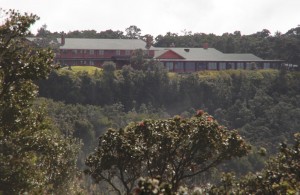 The highly anticipated concession contract goes to a Hawaii-based company, which is owned by Ortega National Parks, LLC and Aqua Hotels and Resorts, Inc.

The historic hotel, operating by the active Kilauea volcano since 1824 and once praised by Mark Twain despite its “outlandish” location, has been closed for many months as the National Park Service worked through the bid process for a new operator.

The National Park Service issued the Prospectus for the Volcano House operation on December 10, 2009, requesting proposals for visitor services that included: overnight accommodations, food, beverage, retail, campground and related services. Due to several amendments, the closing date was extended to September 1, 2010.

The park service says Hawai‘i Volcanoes Lodge Company, LLC will operate the Volcano House as well as Namakanipaio Campground, and other smaller locations within the park. Since the previous operator left at the end of 2009, the NPS has invested over $4 million in upgrades to the Volcano House for fire and safety improvements, including seismic upgrades. As a requirement of the new contract, Hawai‘i Volcanoes Lodge Company, LLC will complete additional renovations on the facility estimated between $2.5 and $3.5 million. The contract will be for a term of 15 years and a required minimum franchise fee, paid to the NPS, of 6.0%
used to help maintain facilities and other critical visitor services.

“Concessioners fill a vital role in helping the NPS carry out its mission,” the park service wrote in a media release, “by operating publicly owned facilities and offering high-quality commercial visitor services at reasonable prices. As required by the 1998 Concessions Management Improvement Act, the NPS solicited for proposals from July 25 through October 25, 2011, for the commercial services provided within Hawai‘i Volcanoes National Park. Offerors were evaluated on their responses to questions asked, including how to engage and educate the visiting public on the native Hawaiian culture through interpretive experiences and retail services, including the sale of Native Hawaiian handicrafts and cultural demonstrations.”

“Together, these two companies have extensive hospitality industry experience – both nationally, as well as within the State of Hawai‘i. We are very excited to have Hawai‘i Volcanoes Lodge Company, LLC join with us as we enter a new era of the Volcano House operation and once again share quality visitor services with over 1.4 million annual visitors to the park.”

“We look forward to working with Hawai‘i Volcanoes Lodge Company, LLC to continue to inspire this sense of wonder over the Volcano House.”