A moment the people of Ka'u have been waiting to see with anticipation... Mayor Billy Kenoi face to face with Able Simeona Lui at Kawa Bay. 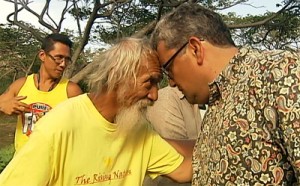 Lui and Kenoi bid farewell with the traditional Hawaiian gesture

KAWA, Hawaii: A moment the people of Ka’u have been waiting to see with great anticipation… Mayor Billy Kenoi face to face with Abel Simeona Lui at Kawa Bay.

It ended up being a peaceful meeting between the two. Lui and his supporters welcomed the mayor and some staff to the area of Kawa – a contentious ‘aina with a notoriousliy clouded title – depending on who you talk to.

Uncle Abel guided Kenoi around – showing him the land where he lives; land that he says is his by allodial right, given to his great-great-grandfather Timoteo Keawe by way of a royal land grant. Of course, the county believes they are the lawful owners of the land, having recently purchased the 550 acres using the Public Access and Open Space land fund. The county even has a court ordered writ of possession that enables them to evict Lui and his supporters.

But so far, no eviction. Instead, talk story.

Certainly, Tuesday’s meeting stood min contrast to the government’s visit in 2008, when nervous officials were stopped by Lui and other native subjects of the Hawaiian Kingdom, before they could survey the lands. This happened under a different administration. Harry Kim was the mayor at the time. Despite the passions on display, the stand-off ended peacefully. At the end, everyone joined hands in prayer, led by Lui.

Since that time, things have gotten more desperate for Lui. When the purchase of the land seemed eminent in 2010, Lui took to the Highway, living by the road in a constant vigil, trying to raise awareness for his struggle.

Meanwhile, court decisions affirmed the county’s right to go ahead with the land acquisition, purchased from the Edmund Olson Trust in November 2011 for $3.9 million.

All the while, Lui grew increasingly erratic, as his time on the land appeared to be limited. As his roadside vigil continued into its second year – transforming the area into a makeshift homestead complete with a working garden – Lui stressed that he wanted to meet with the mayor personally.

Lui has been a divisive character. Some find him to be a sympathetic figure, fighting for his rights as a native Hawaiian. Others see him as a squatter, and have been pressuring mayor Kenoi to oust him and his supporters from the area.

This confluence of events brings us to Tuesday’s meeting, scheduled for 2 pm at Kawa. Lui and his friends were waiting… growing nervous as the time ticked by… past 2 pm… until the county cars appeared on the horizon of the Kawa Flats.

Upon arriving, the mayor – himself a native Hawaiian – set the tone for the proceeding, introducing himself, and his Deputy Managing Director Wally Lau – to Lui, Moses, Mark, Katrina, and other supporters of Lui’s cause.

From there, the mayor got a small tour of Abel’s growing village, meeting other folks who share Lui’s feelings, and taking a look the growing garden.

Then, a walk to the beach – past the original home made by Lui – all the while, the mayor and Lui speaking quietly, away from media microphones; sharing a private discussion, so that Kenoi could “learn about Kawa” as he put it.

This was the mayor’s first time visiting this special place, as an avid surfer of the sacred shorelines around the island, Kenoi immediately picked up on the waves in Kawa Bay. The surf was active on Tuesday, shrouding the land in a light mist.

By the water, the mayor sat with Lui beneath this large tree, talking for a good 15 to 20 minutes – about what, we do not know – before moving on up the beach.

In time, the treck led to Kawa’s beautiful fresh water pond – a pond that we crossed in 2008 in order to film the honu hatchlings, which were guarded by Lui on their way to the ocean.

Today, Lui continues to care for the creatures living here, acting as steward of the land. And as his meeting with the mayor came to a close, both parties reflected on the headway that was made.

Exactly what happens next is anyone’s guess. But now, a dialogue has begun, which is a good place to start in what will certainly be regarded as the mayor’s high profile hope for Hoʻoponopono.