GM Corey Gillins and Lawrence Cacabelos of Big Island Dairy describe what they heard and saw, from their vantage point nearby.

OOKALA, Hawaii: A small plane crash landed along the Hamakua Coast on Thursday.

Police and fire officials say a two-seat single-engine propeller airplane reportedly lost power due to engine failure, and attempted an emergency landing onto a newly planted corn field in Ookala.

Corey Gillins, the general manager of Big Island Dairy, described what he heard and saw, from his vantage point nearby. 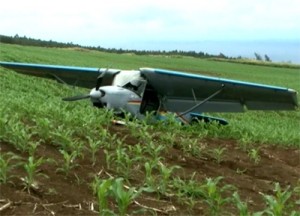 North Hilo officers responded to the Oʻokala Dairy road, near the 30-mile marker of Highway 19, where they found the pilot — a 68-year-old Hilo man — seriously injured.

The Big Island Dairy farmers recounted how the pilot’s complained of severe back pain, and had trouble getting out of the plane.

Fire Department rescue personnel extricated the pilot and airlifted him to North Hawaiʻi Community Hospital for treatment of his injuries. Police later reported that the pilot was air-lifted to Queen’s Medical Center on Oahu, in critical condition.

The cause of the crash is under investigation. The Hawaii County Fire Department said there was no fire, nor any fuel spilled at the scene. An investigator from the Federal Aviation Administration was expected to arrive at the scene on Thursday.