HONOLULU, Hawaii: Hawaii will retain the $75 million “Race to the Top” federal grant for now, says the U.S. Department of Education. The declaration was made in a letter to state officials on Friday, following an on-site visit by the federal review team in March. During the visit, Hawaii presented evidence of progress on its Race […]

HONOLULU, Hawaii: Hawaii will retain the $75 million “Race to the Top” federal grant for now, says the U.S. Department of Education. The declaration was made in a letter to state officials on Friday, following an on-site visit by the federal review team in March. During the visit, Hawaii presented evidence of progress on its Race to the Top plan implementation. 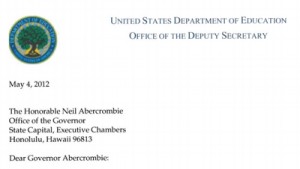 The full text of the letter:

On December 21, 2011, the United States Department of Education (the Department) placed Hawaii’s Race to the Top on high-risk status because the State had not demonstrated adequate progress implementing its approved plans in the first year of the grant as evidenced by the Department’s on-site program review in June 2011, monthly reports, and the amendments requested by the State between July and December, 2011. In that letter, the Department indicated its concern regarding the State’s ability to fulfill its commitments within the grant period. As a condition of high-risk status, the State was placed on coast reimbursement basis. Additionally, the Department indicated that it would conduct an on-site program review within a few months of placing the State on high-risk status. At the time, Hawaii was to provide clear and compelling evidence demonstrating that it had made substantial progress across its Race to the Top plan.

In March 2012, a team from the Department conducted an extensive four day on-site program review of Hawaii’s Race to the Top grant. Based on that review, as well as monthly reports, there is evidence that Hawaii has taken recent actions in the right direction to address a number of the concerns that Hawaii that placed its Race to the Top grant on high-risk and reimbursement status. However, due to the preliminary nature of most of these activities and the lack of necessary sustaining conditions for reform, the Department has determined that Hawaii has not yet demonstrated that it has made the substantial progress across its Race to the Top plan necessary to remove high-risk status. In five to six months, the Department will conduct another review to determine and verify Race to the Top progress and impact and reevaluate Hawaii’s high-risk status.

The Department will remove Hawaii from cost reimbursement status, effective June 1st 2012 due to the fact that Hawaii has met the Scope of Work and budget conditions in the Department’s December 21, 2011 letter.

The Department recognizes Hawaii’s dedication to pursuing comprehensive reform. We will continue to provide assistance to Hawaii as you work to meet the commitments in your Race to the Top grant. We appreciate the commitment of the HDOE leadership team. If you need any assistance or have any questions regarding Race to the Top, please do not hesitate to contact me.

The Hawaii Department of Education says that along with the positive news that Hawaii is maintaining its Race to the Top grant, fiscal sanctions imposed last year will be lifted as of June 1. This action allows Hawaii to spend Race to the Top grant money to achieve its approved plan with more freedom and efficiency.

“The U.S. DOE has acknowledged Hawaii has taken steps in the right direction, and we will continue to move forward on all of our deliverables,” said Superintendent Kathryn Matayoshi in a media release. “A transformational change is taking place in Hawaii’s public schools. This change is focused on creating a better learning environment to boost student achievement.”

In light of this news, Governor Abercrombie released the following statement:

“In our conversation yesterday, U.S. Department of Education Secretary Arne Duncan acknowledged that Hawai’i is making good progress on our Race to the Top plans. As a result he will remove cost reimbursement restrictions, which had been in effect.

“I remain in close contact with Secretary Duncan to keep him personally informed of our commitment and continued progress.

“That includes the recent action by the State of Hawai’i Board of Education to finalize statewide educational policies establishing the framework for performance management of principals and teacher evaluations. We believe that this focus on our children and student performance are key elements in establishing success.

“We appreciate the U.S. Department of Education’s investment in Hawai’i. We will continue to press forward on these reforms with the objective of ending the high risk status currently under review.”

Big Island Video News filmed portions of a recent Board of Education listening session in Hilo (right), where vice chair Brian DeLima answered questions from teachers who were concerned about both the teacher evaluation criteria, and the allocation of the Race to the Top funds, which they were told would not be spent in the classroom. Meetings were also held in Mountain View and in Waikoloa, and DeLima said he heard similar questions.