HILO, Hawaii: Monday began an important week for law enforcement on Hawaii Island and around the country, as police remember fallen officers during Police Week. 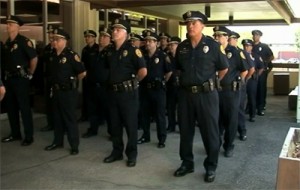 Police line up in Hilo to remember the fallen

HILO, Hawaii: Monday began an important week for law enforcement on Hawaii Island and around the country, as police remember fallen officers during Police Week.

In Hilo, the week of remembrance started with a ceremony at the police station. The Hawaii Police Department issued this media release, along with the video from the ceremony (above):

Members of the Hawaiʻi Police Department and the public celebrated Police Week on Monday (May 14) at the Hilo police station.

In an outdoor ceremony, Hawaiʻi County Managing Director William Takaba read a mayoral proclamation declaring May 13-18 as Police Week in the County of Hawaiʻi and May 15 as Police Officers Memorial Day.

Chief Harry Kubojiri told the audience that Police Week ceremonies are taking place this week at police departments all across America—including one in the nation’s capital attended by approximately 25-thousand law enforcement officers. “In size, that event is more massive than ours,” Kubojiri said, “but in sentiment, ours is equally grand.”

The chief noted that he never knew Officers Cadinha and Oili, but said both Jitchaku and Keliipio were his co-workers who laughed with him one day and were gone the next. “I still miss them and I know many of you do, too,” he chief said. “We can only begin to imagine the loss their families still feel.”

The chief added that Police Week also honors officers injured in the line of duty, noting that 61 Big Island officers were hurt on the job last year. He thanked his officers for working to make the Big Island communities safe and said he prays that each one returns home safely to their loved ones at the end of each workday.

A similar ceremony will be held Thursday (May 17) in Kona.