A special meeting of the Hawaii County Council was held on Thursday, where the nine local lawmakers approved a $365 million operating budget for the county government by a vote of 8 to 1. 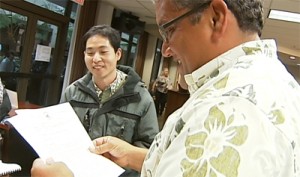 Mayor Billy Kenoi looks over the latest plan to fund GASB 45, via a measure cooked up by Council Chair Dominic Yagong

HILO, Hawaii: A special meeting of the Hawaii County Council was held on Thursday, where the nine local lawmakers approved a $365 million operating budget for the county government by a vote of 8 to 1. Council Chair Dominic Yagong was the only “no” vote.

Hawaii County Mayor Billy Kenoi popped into the council chamber after the vote, and conducted this impromptu press conference.

Overall, the council session lasted a relatively short time compared to past budget meetings. An anticipated drawn out battle to amend the mayor’s proposed spending plan never occurred, despite the council’s concern over the mayor’s decision to defer another round of payments to GASB 45, which is designed to pre-fund future obligations for retirement health care.

A big amendment submitted by South Kona councilwoman Brenda Ford targetting the general fund balance from the previous year to the tune of $10 million dollars was withdrawn. The money would have gone towards a payment to GASB, but when Yagong hinted that he had something on the way for the June 6th council meeting, Ford stood down. The maneuver was also under the threat of a Kenoi veto.

It appears Yagong will be submitting a bill to mandate that future fund balances over the amount of $5 million dollars will go towards a GASB 45 payment.

Kenoi looked at the paperwork for Yagong’s bill for the first time on Thursday, but he had little comment.

While the big ticket amendments were withdrawn, there were still minor skirmishes over some other items… Once again, the budget of the Office of the Legislative Auditor was under attack. Hilo Councilman Dennis “Fresh” Onishi wanted to take $75,000 from the auditor and put it towards the post-employment benefits.

The amendment failed to pass, as did another Ford amendment to raid the corporation counsel budget for $65,000 to upgrade software for the Department of Information Technology.

One amendment that did pass: a minor one designed to save the Pahoa council satellite office, submitted by Ka’u Councilwoman Brittany Smart. The amendmant takes $20,000 from the one County Clerk fund, as well as $7,600 from Postage-Council Services and applies it to another Clerk fund that will ensure the conituation of the office.

Possible upcoming changes to the geothermal relocation and community benefits program could jeopardize the funding, but this amendment will preserve funding by way of another source.