It was a marathon day at the Hawaii County Council on Wednesday, as lawmakers debated two important measures concerning hunting on Hawaii Island. 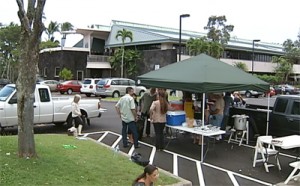 HILO, Hawaii: It was a marathon day at the Hawaii County Council on Wednesday, as a number of important bills were heard. Chief among them… for the first time, the council debated two important measures concerning hunting on Hawaii Island.

One: a charter amendment creating a Game Management Advisory Commission. The other, more controversial bill: a challenge to the authority of the state Department of Land and Natural Resources to lawfully conduct helicopter eradication missions – as they have done on Mauna Kea and elsewhere.

Both bills advocated for home rule, and gave a voice to the island’s hunters, who for years have felt pushed aside by policies of the Department of Land and Natural Resources and other Oahu-centric officials.

Hours and hours of testimony sent the council meeting into the late night hours. The audience was packed.

Earlier in the day, it was like a tailgate atmosphere, outside in the parking lot of the county building, where the Pele Defense Fund organization and other local hunters served locally produced smoke meat and other food during the lunch break.

The council also set time aside for a special presentation by Tony Sylvester, a long time Mauna Kea hunter, who drew some startling connections between DLNR efforts to eradicate ungulates on the mountain (right), and the decline of the endangered palila population.

The DLNR has long blamed federal law for their need to conduct the eradications, and have defended the aerial shootings as a needed tool to complete the mission.

Councilman Dominic Yagong, who introduced the bills, began the council debate by explaining the inspiration behind the bills. The council voted to give the OK to putting the charter amendment on the ballot for voters to decide.

The bill will need to pass two more readings, first.

Yagong then read into the record the purpose of his second bill, declaring the helicopter hunts illegal.

Some councilmembers balked at the legalities… especially after receiving a letter from the state Attorney General that seemed to dissuade the council from approving the bill.

But Corporation Counsel said the lawmakers were not prevented from voting how they felt.

Some councilmembers also remembered a measure that they approved a few years ago, which was introduced by Kona Councilman Keely Greenwell. It was a resolution that told the DLNR that the county did not approve of the shooting of feral cattle on Hualalai.

Despite lingering concerns about enforceability, the council voted the measure through, to the pleasure of the audience.

I saw a video on Big Island Video News. (VIDEO: Hunters hold hearing over DLNR fencing, game eradication) I gotta tell you it moved me immensely. And I would suggest that many of you look at that video as well… Any time there is an issue in regards to hunting, we simply say its a state issue. We’ve always done that. But listening to that video, and watching that video, made me realize that we here at the county level can no longer just sit back and relax and leave this thing for people on Oahu making the decisions for the people here in the County of Hawaii. – Council Chair Dominic Yagong, during Hawaii County Council meeting on June 6th, 2012