What will it take to grow another ice cap on Mauna Kea?

MAUNA KEA, Hawaii: This week’s USGS Hawaiian Volcano Observatory Volcano Watch article takes a look at Mauna Kea’s glacial history, through the geological lens. In the past half-million years, Mauna Kea has supported an ice cap at least four times. These glaciations occur when the climate is cold and wet, when more snow falls each […] 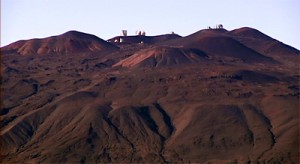 In the past half-million years, Mauna Kea has supported an ice cap at least four times. These glaciations occur when the climate is cold and wet, when more snow falls each year than melts.

Ice caps are large glaciers in which ice flows outward in all directions from the cap’s thickest points. As the ice flows, it erodes the surface, picking up and transporting underlying rocks and ash, and eventually deposits them as garlands of loose debris at the edge of the ice cap. Geologists interpret these deposits, known as end moraines, to infer the extent of past ice-cover and to provide clues about the climatic history of Hawai`i’s alpine environments.

Since it is always cold at the summit of Mauna Kea, why is there no ice cap today? East Hawai`i has no shortage of moisture, and Mauna Kea receives much more snow each winter than do many of the ice caps in the polar regions. The warm summer temperatures on modern Mauna Kea prohibit glaciation, however, since nearly all of the snow and ice melts away.

What might depress summer temperatures enough to grow an ice cap? Elevation is one factor. The atmosphere gets roughly 2 degrees Celsius (3.5 degrees Fahrenheit) colder for 300 m (1,000 ft) of elevation gain. At over 4,000 m (14,000 ft) above sea level, it is reasonable to expect the summit of Mauna Kea to be about 20 degrees Celsius (50 degrees Fahrenheit) colder than Hilo.

Rapid growth of the island through volcanic processes has increased its mass enough that the island has sunk under its own weight. During the most recent Mauna Kea glaciation 14,000 years ago, the summit was only about 40 m (150 ft) higher than it is today. Elevation alone is not enough, however, to explain why ice caps persisted on Mauna Kea, because we see evidence that they reached as low as 3,350 m (11,000 ft) elevation.

Glaciations are also controlled by the amount of solar radiation (heat) that reaches Earth’s surface. Changes in the shape of Earth’s orbit around the sun and in the orientation of Earth’s rotational axis affect the amount and distribution of the radiation. The color and roughness of Earth’s surface determine whether the radiation is reflected or absorbed and re-emitted as heat. The composition of the atmosphere controls whether the reflected radiation is directed away from Earth or back toward it.

As you know, wearing light colors outside helps you stay cooler. A large polar ice cap does the same for the planet. A large ice cap at the North or South Pole changes the color of part of the planet from green, blue, or brown, to white. The snow reflects most of the radiation that hits Earth. Cooling at the poles is enough to impact the surrounding area significantly and likely depresses temperatures globally.

Low levels of greenhouse gases—mainly water vapor, carbon dioxide, and methane—decrease the amount of radiation that is absorbed and reemitted back toward Earth, ultimately causing temperatures to decrease. Analyses of gases trapped in ice cores reveal that three of the four glaciations on Mauna Kea indeed correspond to low levels of greenhouse gases in the atmosphere.

By looking at past geologic events, such as glaciations, we can appreciate the complex interactions between geologic cycles on this planet and the enormous influence of the sun. Can we expect another ice cap anytime soon? Elevated greenhouse gasses plus the ongoing subsidence of the island make conditions unfavorable for another glaciation for at least the next couple of thousand years.