HAWAII VOLCANOES NATIONAL PARK, Hawaii: Good news for hikers who enjoy traversing the lands of the national park. Hawai‘i Volcanoes National Park has reopened the section of Crater Rim Drive near the Devastation Trail parking lot to Keanakāko‘i Crater, and a portion of Crater Rim Trail that leads from Chain of Craters Road to the south side of […]

Approximately 0.8 miles of Crater Rim Drive is now open to hikers, and visitors can enjoy an easy roundtrip walk through koa and ōhi‘a forest on pavement all the way to the Keanakāko‘i Crater overlook. Across the road, another overlook provides panoramic views of Halema‘uma‘u Crater and Mauna Loa.

The park has also reopened about 0.7 miles of Crater Rim Trail from Chain of Craters Road just north of Lua Manu Crater. This section of trail winds through native forest, along the flows of 1974, and culminates at the south side of Keanakāko‘i Crater. Both routes offer an abundance of diverse and breathtaking views.

Keanakāko‘i Crater likely formed during the 1400s, during Kīlauea’s great summit collapses. Until 1877, Hawaiian kahuna kāko‘i (carving experts) sought the crater’s superior and rare basaltic rock for making ko‘i, or adze heads. Bound to a sturdy ‘au ko‘i (wooden handle), this valuable tool was used to carve vital objects like canoes and houses. But the famous adze quarry was covered by lava, first in 1877, then again during the fissure eruption in July 1974. Today, the crater floor is 115 feet deep.

“Thanks to a new sulfur dioxide monitoring network, and an increase in air quality monitoring tools at our fingertips, we can effectively evaluate air quality conditions,” said Park Ranger and Chief of Interpretation Jim Gale. “We encourage park visitors to take advantage of the newly opened section of road and trail,” he said.

The Keanakāko‘i area may still experience high levels of volcanic fumes with changing wind conditions. Should this happen, the park will temporarily close the site to visitation. Interpretive signage in the area features a QR code for smart phones, which connects to the national award-winning Hawaii SO2 Network website, www.hawaiiSO2Network.com. 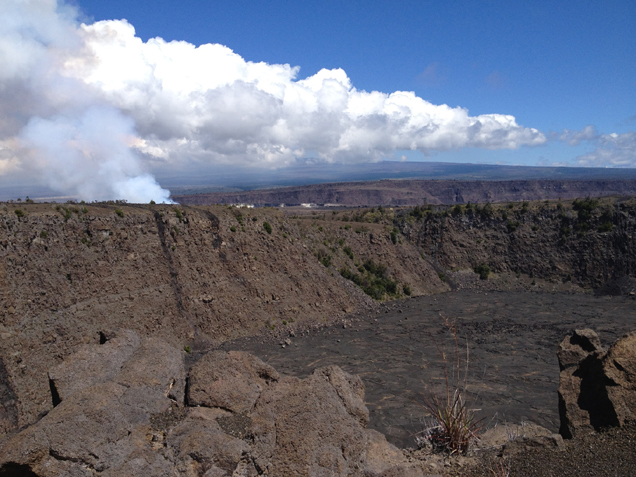 Keanakako'i from the south shows plume of Halema'uma'u Crater to the left and Mauna Loa, courtesy NPS