In Hawaii, the rocky shore can be a rough and rugged place to hunt ulua. 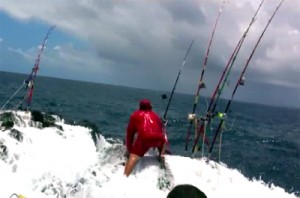 HILO, Hawaii: A boisterous Bryson Kawaihae was last in line at the Afook Chinen Civic Auditorium on Sunday, but he ended up in first place. Kawaihae’s 85.3 lbs. ulua reeled in off Road to the Sea took the title for biggest fish.

According to S. Tokunaga Store owner Mike Tokunaga, it was another banner year for the tournament

Things were slow midway through the Sunday’s well attended weigh-in. The scale was actually empty for a short time. But as the event approached its conclusion, the trucks were lined up once again to deliver their catch.

One thing fishermen are always aware of: the sustainability of the ulua fishery. The tornament is an opportunity to raise awareness.

Kurt Kawamoto, NOAA Barbless Circle Hook Project manager, was again on hand, documenting the casters who accepted the challenge. The top three fish were all caught using the barbless hooks.

The weigh-in is a time to relax after a hard week of fishing. Here in Hawaii, the rocky shore can be a rough and rugged place to hunt ulua.

Last year, Laron Kageyama limped to the finish line – with a large ulua in tow, and a harrowing story – after a near death experience fishing the cliffs off Kapoho.

It looked like a nice day in 2011, as Laron and his fishing friends were in pursuit of a top spot at Tokunaga’s Ulua Challenge. Kageyama had hooked his ulua and was in the middle of a long fight, when a set of freak waves rolled in, scattering the group of fishermen, and knocking Laron into the sea. This video uploaded to Vimeo shows the dramatic moments of fear amongst the fishermen. A bouy kept Kageyama afloat in the water, and he was pulled to safety after a hard struggle.

Unfortunately this year, another, different fisherman was not so lucky.

29 year old Ceasare “Chaz” Moses of Pahala was swept out to sea by an unexpectedly large wave while retrieving a throw net near the lighthouse at South Point. His body was found just a few days later.

And so Sunday’s weigh-in was more than a chance for the shorecasters to congratulate on a good catch… it was an opportunity to celebrate a safe return.