Hawaii County Firefighters battle the brushfire that threatens Pahala on either side of town.

UPDATE – Wednesday – June 20th, 2012: Approximately 5239 acres have been consumed in the ongoing Pahala brushfires, but the outlook is a little better today, according to the latest Hawaii County Fire Department dispatch.

Highway 11 Fire (makai): Not yet contained. The hot spots along the south edge firebreak are being extinguished and maintained by 3 units. The area above the 49 mile marker of Highway 11 is being extinguished by 4 units, and crews are also utilizing a dozer to cut breaks mauka of the road. Another dozer is cutting breaks in below the 52 mile marker from makai heading mauka.

Road closures in the area are still in effect. The cause of the fires are still unknown. 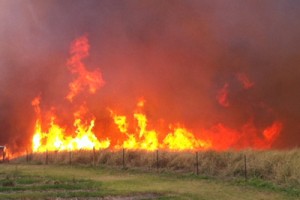 According to the Hawaii County Fire Department, one fire started inside of the Maunaloa Macnut orchard, and spread in a westerly direction, makai of the main highway, consuming about 500 acres at sundown.

2 choppers performed water drops on both fires, neither of which were contained as of Monday night. The entire area south of Pahala had dense smoke that traveled all the way to almost Ocean View.

Police closed Highway 11 at the 50 to 51 mile markers in Pahala because of the fire.

Former County Councilman Guy Enriques was interviewed Monday night at a house in Punaluu. Earlier in the day, Guy was running a volleyball practice for his Club, Southside Volleyball Club… as they prepare for a trip to the Junior National Volleyball Championship tournament in Dallas in two weeks. Enriques says the fires along this stretch of Ka’u are nothing new. Last year, police were on the look out for arsonists after a series of smaller brushfires torched parts of Punaluu [MORE: Fire near Punaluu closes Highway 11 | August 4, 2011]

Patients from Ka’u Hospital were evacuated to the Naalehu Community Center. Sources say the fire came close to the hospital, and ash that blew into the hospital will have to be cleaned before the patients can be moved back in, probably some time tomorrow or the next day.

For more on how the fire impacted the residents of Pahala town, Julia Neal of the Ka’u Calendar has a detailed report, filed on Tuesday:

Ka`u Coffee grower Bong Aquino said he fled from his R&G Royal Ka`u Coffee farm as the flames came to the gate. The Miranda family, with three farms, fled Pear Tree as the fire, fueled by nearby eucalyptus and gulches full of brush, raged toward their orchards. Fire marched into a eucalyptus stand adjacent to Ellis and Sokha Hester’s commercial vegetable plantings above Pahala but spared their farm.

After cleaning out Pa`au`au gulch, one fire jumped Hwy 11 and headed up the Volcano side of Kamani Street, threatening not only the hospital but four homes owned by Al and Kelly Galimba. Firefighters quickly doused the flames and sprayed white, foaming retardant along the roadside. Helicopter pilots lifted water from an inflatable reservoir set up in the parking lot of Ka`u Hospital and carried it to the mauka and makai fires to douse hot spots, as patients in the hospital relocated to Na`alehu Community Center.

ML Macadamia workers and coffee and truck farmers dug firebreaks with bulldozers and other equipment around their properties and a 10,000-gallon diesel tank on the makai side of the highway in the middle of the orchard owned by ML Macadamia. Between the orchards, fires raged through Pa`au`au and nearby gulches. Fires spread through orchards makai of Hwy 11.

This morning, firefighters, ML Macadamia and Olson Trust crews. along with highway workers watched Keaiwa and Ka`ala`ala gulches, anticipating another flareup and another possible closure of Hwy 11 should the winds return.

Ka`u Coffee growers found many farms to be less damaged than expected. Gloria Camba and Bong Aquino found that the fire had burned around their coffee trees and damaged windbreak.

The most affected farms, with many coffee trees unlikely to recover, are those of Godofredo Mauricio, Rosita Avenue, Sixto Asuncion and Melchor Fernandez, Aquino reported.

He also said that lands at Higashi Camp, an abandoned sugar cane community, were still smoldering. Smoke and ash blanketed the region this morning and such businesses as Ka`u Coffee Mill let their employees go home to avoid poor air quality.

As of 4 p.m. on Tuesday, the Hawaii Police Department reported that Highway 11 by Pahala was closed between the 46-mile marker and Kamani Street.

The fire department released this map of the fire to media, showing the locations of the two ongoing blazes. The town of Pahala remains sandwiched in between.