KEALAKEHE, Hawaii: A moment over two years in the making – a short time when it comes to building roads in Hawaii – as the Kona community gathered to celebrate the opening of the Mid-Level Road, properly called the Ane Keohokalole Highway.

We will have much more on this story on Tuesday, including a lengthy time line for the road construction as covered by Big Island Video News. 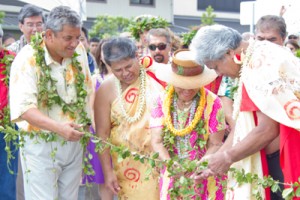 Mayor Billy Kenoi today joined the families of the Keahuolū, Kealakehe, Kaloko, and Honokōhau areas, the Keohokālole family, and about 300 members of the public in opening the Ane Keohokālole Highway in Kona. The 2.9 mile, $30.5 million highway opened to the public this afternoon following a noontime blessing. The blessing included chants honoring the history of the area as well as Ane Keohokālole, the ali‘i for whom the road is named.

Ane Keohokālole Highway runs parallel to and about a mile mauka of the Queen Ka‘ahumanu Highway from Palani Road to Hina Lani Street in Kaloko. It is named after the mother of Lili‘uokalani, the last monarch of the Hawaiian Kingdom. A large portion of the land for the highway was donated by the Queen Lili‘uokalani Trust.

“This is probably the most satisfying project we’ve built because it was the most challenging, and yet the most successful in terms of bringing people together,” Mayor Kenoi said.

The $30.5 million highway represents the largest expenditure of American Recovery & Reinvestment Act money for transportation infrastructure in Hawai‘i. It is also the first major road in Kona to be built by Hawai‘i County since statehood. Ground was broken on the first phase on March 30, 2010.

The county notified the Hawai‘i Island Burial Council and Native Hawaiian community early on in the process of planning the road, and worked closely with cultural descendants to ensure proper treatment of Native Hawaiian remains if found along the corridor. Working with Federal Highways Administration officials, a project team was able to make design modifications that assured the remains were preserved in place.

Project planner Belt Collins Hawai‘i worked on the design of the highway in parallel with the environmental and cultural processes. In November 2009, the project received a finding of no significant impact. The process, which normally takes as long as two years, was accomplished in eight months.

“One of the interesting things that came out of this was because it was a time crunch, everyone pulled together from all levels of government and all the different agencies,” said John Chung, Vice President and Chief Engineer of Belt Collins Hawai‘i. “A project like this wouldn’t have gotten done in under a year without a lot of cooperation. It was very refreshing to see.”

“I believe the Ane Keohokālole Highway serves as a template to show us how to address cultural concerns, burial issues, environmental concerns, and incorporate that into good design and good planning. But more important was the community input and community guidance,” Mayor Kenoi said.

“Because of all of those factors, and the leadership of our team, (Public Works Director) Warren Lee, (Deputy Managing Director) Wally Lau, and (Executive Assistant) Bobby Command, this incredible project is complete. It’s pretty exciting, pretty rewarding, and very satisfying.”

Put out to bid in December 2009, the construction contract was awarded to Nan Inc. of Honolulu. The first phase was originally planned as 1.8 miles of finished highway from Palani Road to Kealakehe Parkway at the West Hawai‘i Civic Center. The first phase also included widening and repaving about a third of a mile of Palani Road between Queen Ka‘ahumanu and the intersection with the new highway, as well as the ground work for a future 1.1 mile phase from Kealakehe Parkway to Hina Lani St.

“There were a lot of uncertainties in the beginning. None of us involved had ever built a road quite like this. This is the first concrete paved road on the Island of Hawai‘i, and the first major roadway construction project in over 20 years,” said Alex Leonard, Project Manager for Nan Inc. “A lot of people in the community have been looking forward to this for a long time.”
Deft management of the project by the County’s Department of Public Works saved almost $3 million, and that was applied to the cost of finishing the additional 1.1 mile stretch, linking the road to Hina Lani Street.

“It alleviates and mitigates the congestion that West Hawai‘i has experienced for many years. It allows people to spend less time in traffic and more time at home with their families,” said Mayor Kenoi. “It allows the creation of a thriving, vibrant community here in Kealakehe, in Kaloko, in Honokōhau, and in Keahuolū.”

Ane Keohokālole Highway will facilitate the development of the state’s Kamakana Village affordable-housing project, commercial development by the Queen Lili‘uokalani Trust to support children’s programs, and the Department of Hawaiian Home Lands’ expansion of La‘i‘ōpua Village and its planned community center. The State Judiciary will also construct its new complex at the corner of Kealakehe Parkway and the new highway. County Mass Transit has committed to establish a Hele-On bus loop using Ane Keohokālole Highway and the Queen Ka‘ahumanu Highway.

The Ane Keohokālole Highway project also involves preservation efforts at each end of the road. An interpretive center is being built at the Palani Road end of the project, while an initiative to preserve one of Hawai‘i’s last remaining dryland forests is taking place at the Hina Lani Street intersection.

Keohokālole was born in 1816 in Kona. Her paternal lineage traces back to Kame‘eiamoku and Keaweaheulu, Kona chiefs who supported Kamehameha during his quest to unite Hawai‘i Island before going on to unite all the islands of Hawai‘i. Keohokālole married Caesar Kapa‘akea and had ten children – among them King Kalākaua, Queen Lili‘uokalani, Princess Likelike, and Prince Leleiohoku, collectively known as Nā Lani ‘Ehā (The Royal Four).

With the lands that she inherited from her mother Keohokālole, Queen Lili‘uokalani established the Queen Lili‘uokalani Trust as an enduring gift to Hawai‘i’s people, to serve orphaned and destitute children. A large portion of the land for the highway was donated by the trust.

SOURCE: County of Hawaii, Office of the Mayor 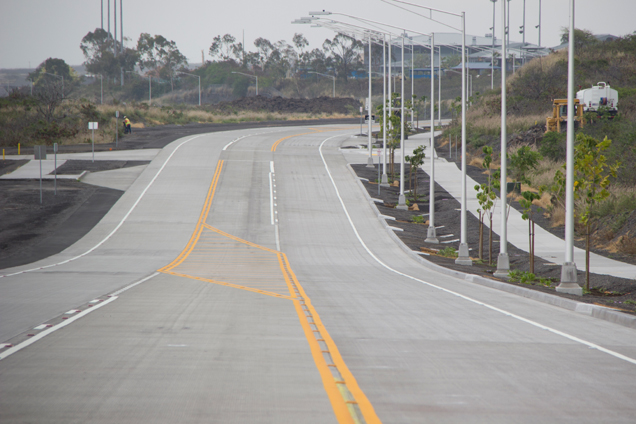