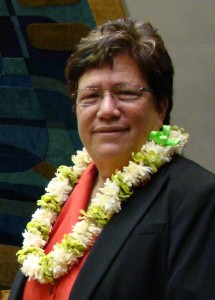 Sen. Solomon, who served in the State Senate fro 1982-1998, was appointed back to the State Senate in 2010 by Gov. Neil Abercrombie to serve out the remaining two years of then Sen. Dwight Takamine’s term when he became the State Director of Labor.

Now, Sen. Solomon hopes to return to the Senate but this time as Hawai’i Island’s new 4th District State Senator, which is the result of a statewide reapportionment suit she and others filed with the Supreme Court based on the Big Island’s nearly 25 percent increase in resident population over the past 10 years. Before this, Hawai’i Island only had three State Senators.

“The increase to four Senators gives Hawai’i Island a significantly stronger voice at the Legislature. Historically, all neighbor island legislators have worked together and also team up with rural ‘Oahu Senators, but we didn’t have enough votes to make headway on some of the most challenging issues for the neighbor islands, especially in medical care, education, transportation and agriculture. Now that we have seven neighbor island Senators, and Oahu has lost a Senator, we have a much better opportunity to address the needs of our island,” she said.

Everyone is invited to the Hoffmann’s talk-story, timed to remind voters that this year’s Primary Election is 5 weeks earlier than ever before on Sat., Aug. 11, and that many races will be resolved in the Primary.

No RSVP is requested. Light refreshments will be served.