HAWAII ISLAND, Hawaii: Governor Neil Abercrombie notified the State Legislature of his intent to veto 19 bills on Monday. Of the 19, a few have to do specifically with coffee. One of those possible vetoes getting lots of attention: House Bill 280, which removes the requirement that all Hawai’i-grown green coffee beans shall be inspected and certified […]

Of the 19, a few have to do specifically with coffee. One of those possible vetoes getting lots of attention: House Bill 280, which removes the requirement that all Hawai’i-grown green coffee beans shall be inspected and certified by the Department of Agriculture. The governor says the implications of this measure “are problematic, and that further discussion is needed to ensure that the Hawai’i brand will not be undermined.” 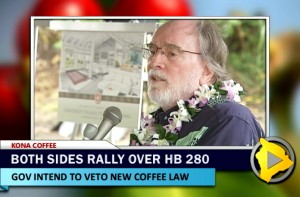 “Despite what must have been tremendous opposition, HB280 is on the Governor’s VETO list! Thank you Governor Abercrombie!! Thank you everyone, including KCFA’s very hard working Legislative Committee!

We want to thank the Governor as profusely as possible for his effort to recognize, “The implications of this measure are problematic. Further discussion is needed to insure the Hawaii Brand will not be under mined.” Governor Neil Abercrombie on Legislation that would have removed mandatory certification for Hawaii-grown coffee.

Please help insure that the Governor knows we appreciate his efforts on our behalf, by sending a thank you email today, to: gov.contact@hawaii.gov , expressing your enthusiastic agreement with his VETO of HB280.

“Passage of HB 280 is Important for Hawaii Coffee Industry

Coffee is one of Hawaii’s signature products. The legendary Kona origin has been part of the mystique of Hawaii for nearly 200 years. High-quality Hawaiian coffee is a unique export crop in that it is almost exclusively grown on small family farms that help to support resilient rural communities. However the very success of Hawaii’s coffee has led to problems of counterfeiting that the coffee industry must address in order to protect the integrity of Hawaiian coffee in a global marketplace.

Deep budget cuts in 2009 set Hawaii’s Department of Agriculture on its heels, shrinking the department’s budget by 19%. Numerous positions were eliminated, including coffee inspectors. With the loss of all but one inspector position in Kona, the viability of the inspection service was crippled. This year’s growing season has been marked by increasing delays for inspection and certification. Coupled with impacts from Coffee Berry Borer, severe drought, and rising shipping costs, the coffee industry has reached a tipping point. Delays of up to four weeks hurt the industry, crimping cash flows to farmers and producers alike, strangling commerce.

The certification process has become a restrictive bottleneck, damaging the industry it was intended to protect. Inspector positions have not been restored notwithstanding industry efforts. The pain will continue if a remedy is not found. Our primary competition is not within our borders, but overseas where our wage and benefit burdens don’t exist. Long delays combined with relatively high production and shipping costs combine to make one of Hawaii’s signature crops less competitive in the global marketplace. Clearly a change is needed.

There are two aspects of coffee certification that inspections address: minimum quality standards and origin. Currently, in order to sell coffee as of Hawaiian origin, minimum quality standards must be met. Sophisticated buyers who pay the prices that Hawaiian coffees command typically request samples in advance. These samples are evaluated to a much higher standard than HDOA’s standards by panels of highly skilled, accredited cuppers with discerning palates. The ultimate arbiter of quality is the buyer. If coffee buyers are not demanding minimum quality certification by HDOA, HB280 will make quality certification voluntary. If they are, it would continue to be available on a fee-for-service basis.

Secondly is certification for origin. This inspection helps ensure that the coffee is accurately represented by the seller with respect to where it is grown. Maximum penalties are currently up to a $1,000 fine and up to one year in prison, or both, and enforcement lies with HDOA. These penalties are not having the necessary deterrent effect. A fine of $1,000 is less than the value of a single bag of quality Hawaiian green coffee and HDOA has never put anyone in jail.

Passage of HB280 would make false labeling (counterfeiting) of Hawaii-grown coffee a felony punishable by a $10,000 fine and up to five years in prison. The bill provides for enhanced record keeping and reporting and gives law enforcement statutory authority to enforce the laws. HB280 gives Hawaii’s valuable coffee origins more protection than they have ever had before; certainly more than what exists today. The ability for producers to opt out of minimum quality certification will reduce HDOA’s workload, eliminate delays and help rural locations that have been historically underserved by inspectors.

It’s important to note that Hawaii’s current certification rules do not regulate roasted coffee nor any coffee not moved out of the growing region. If the market can voluntarily regulate quality in these trading environments, the same is true at other levels.

While much of Hawaii’s coffee is produced on small family farms, large scale production is also found on plantations located on Maui, Kauai, Molokai and Oahu. Given this diverse spectrum of producers, it’s uncommon when such a broad array of stakeholders agrees upon any issue. This is one of those landmark occasions when growers and producers, large and small, government and law enforcement agree on a solution.

In response, the Kona Coffee Farmers Association has created an online petition, urging the governor to go ahead with the veto.

Also, the governor intends to veto House Bill 283, which would appropriate $196,000 from the agricultural loan revolving fund to a program to control and eradicate the coffee berry borer. The governor says rather than use funds meant to help farmers who have trouble obtaining financing, the Department of Agriculture plans to use $200,000 of barrel tax funds in its commitment to eradicate the coffee berry borer and in order to meet the intent of this bill.